The Penny Arcade iRacing league does ovals on Mondays. I usually only do the Thursday night race but this one sounded too fun to miss. We will be racing the Radical SR8 at Talladega...at night. Super fast cars on a ridiculously fast track in the pitch black, let's do it! I'll be opening the Pit Crew around 6PT this evening over on Twitch if you'd like to watch along. My guess is this one will be action packed! 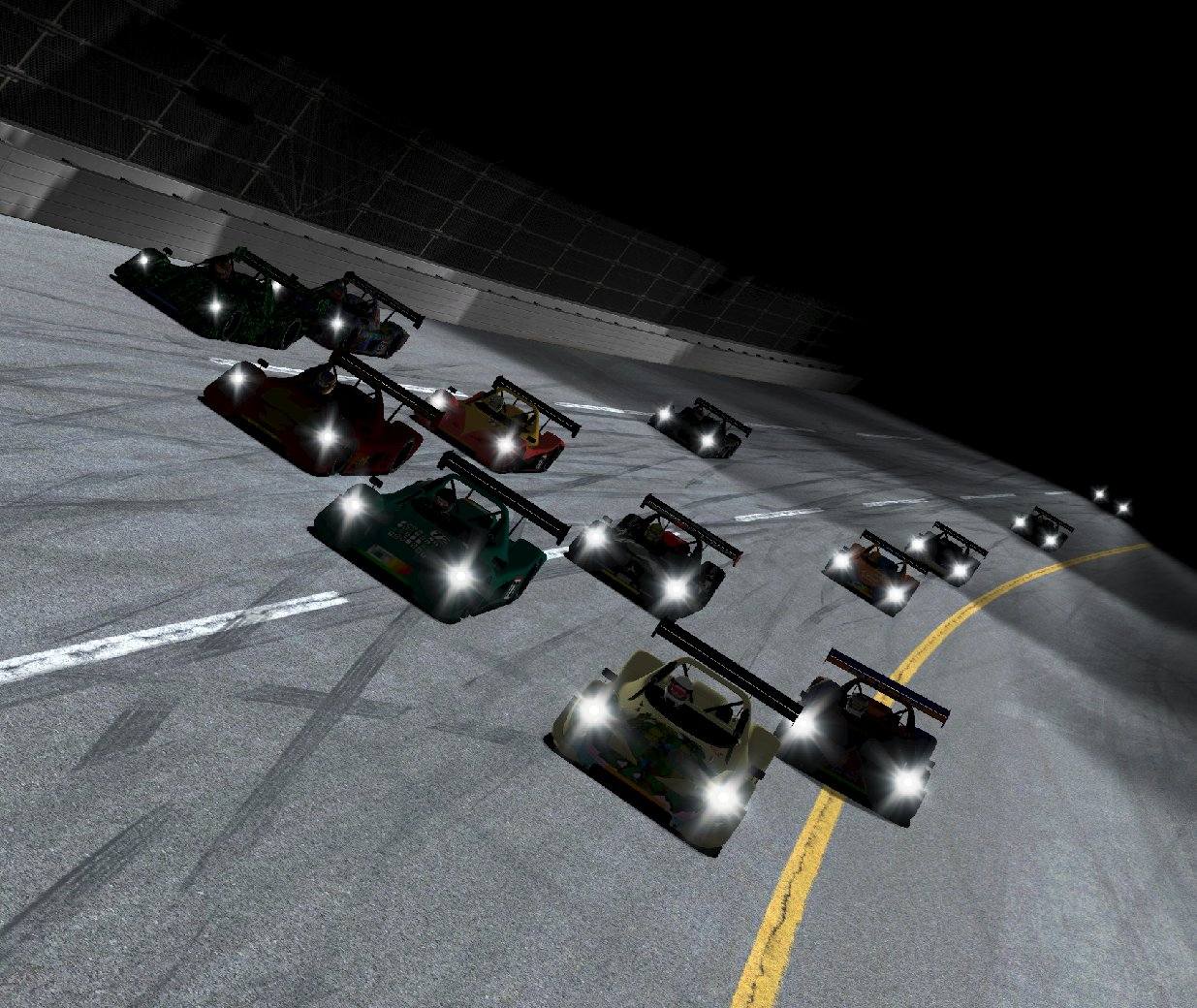 I. I just woke up from surgery. I wish that I knew what was happening. The main thing I gotta do is apologize to all these people for making them wake up in the middle of the night. I ate some chicken wrong and it’s now impacted a lot of lives. Let's get the ol’ shame engine warmed up - it’s never been off this long before, two full hours they tell me, and I feel naked in the absense of its oily cloak. Dr. Shanna, Nurse Belva, I'm sorry. I think a better man might not have instigated the causal chain that resulted in you having to come in here at two in the morning. That’s what I mean to say, and I take a running start at it, except the place where their names should be are like the holes that lead down into a rabbit’s den. If I try to grab them, they just go further in. I learn that if I want to retrieve one of these warm, lost words, I simply form the sentence around it, like a Mad Lib. I leave a little space for the name, and it sniffles its way out of the warren right after the honorifics. When it finally does come out, in the sacred sequence that retains its meaning, they don’t even know what I’m talking about. They don’t know why I’m using my energy in this way. They only want me to feel better. That’s something that firmly distinguishes them from Dr. Fuckface.

II. It’s easy to tell they think I’m one of Those Patients even from my little room. They are tired of how anxious I am, but I haven’t been able to swallow for five hours so my mouth is just running like a drainage pipe. I drooled a quart at home and now I’m filling this bag they’ve given me, in the least pleasant take possible on a balloon animal. The nurses are doing their shit, more or less. They aren’t really telling me what’s going on, but at least they don’t audibly sigh whenever I get sick. “Stop trying to vomit,” he says, exasperated, and in between my body’s attempts to crack its upper half like a whip over and over to expel the cork it’s made of the chicken bite, I manage to plate and subsequently serve the following: “This is completely involuntary.”

III. Before she came at me with the IV more or less without warning - you can imagine my delight - they tried to make me drink Pepsi because that sometimes works. There was also an Ativan. This is an Ativan, she says, after I ask what she’s trying to give me. She forgot that part. Do you know what that is? And I do, because for a little while Ativan was what allowed Mike to go to Australia by plane. Eventually that horror simply shredded the drug, draping it in a kind of timeless pagan mist. It’s an anti-anxiety medication, and I’m not opposed to it - conceptually, or literally. In the devil church of American hell medicine it’s a sacrament that enables greater sacraments. I appreciate the offer. But.

IV. At some point in his medical training or his practise of same, Dr. Fuckface came to believe he was fucking Charon or something. And you’re subject to men like this if you ever have the temerity to deviate from some model they have in their mind, something from a book, some optimal chimaera. I’m not trying to make a case that my story is some kind of special instance, it’s not. But it’s true, and it’s real, and it’s common as the rain. When I left his domain, taken by cool, nice people who had some concept of what was happening, he got one last one in: he wanted to make sure I knew that I was lucky the surgeons had deigned to come in, because otherwise it would have been several more hours of this. Except before he told me they weren’t coming, so I sent Brenna back to where we were staying, forty-five minutes away. That meant that I had to emerge from Roman Numeral One above and then try to recuperate in the White Sun of the Emergency Room lobby for several hours. The surgeons didn’t feel I’d strayed from the Pure Way at all. They didn’t think I’d deviated from the human apex, they knew that bodies sometimes require maintenance. And eventually sleep. Which is what I’m going to do now.

We also wrote a strip about PAC-MAN 99 which you can find here. Noah and Gabe - the euphemistic Gabe, that is - are here to delight you on stream from 2-4 PDT, with a blistering combo of “the fortnite” and Monster Hunter.

They threw the crib door wide in Washington State for vaccines come the 15th, if you want one you can have one, provided you’re over sixteen I think. I got in just under the wire because of the old Asthma commingled with my substantial bulk. For the longest time I wasn’t really aware of the fact that I had fairly significant asthma, just that I preferred Strength to Cardio, at least partially because it was physically possible for me to do the first one without feeling like a black, sucking hole had formed in my chest cavity. I always look to myself first, when I detect a failure on some level: is this failure the result of my being weak, vile, or otherwise reprehensible?

In this case there’s some real concerns re: my alveoli, and it’s not really connected to my moral character. Speaking of lungs, there’s some issues with one of Gabriel’s cavities and it’s something we investigate with unswerving enthusiasm in today’s strip.

Can’t flex my Golf stream today, back at it next week with the usual brigands slash ne’er-do-wells, but Josh has you covered with what used to happen then which is Dark Souls II from noon on. And then, in the manner of Pirate Radio, the people’c champion Laura Frohmwerk seizes the channel from 4-7 for additional delights and profundities.

Here’s how it works: if a person comes toward me with a needle, for any reason, my mind becomes decoupled from my body. It floats above, looking down.

Thus freed from natural human strictures, and possessed of a wild animal’s desperate desire to live, the body does everything it can to confound and evade any attempt to puncture it. Blood draws are this way, but also the administration of a life-giving - or, at any rate, life retaining - serum, and so when the needle approaches my arms begin to wave and swipe in wide arcs as though dispersing phantasmal insects. This is frustrating for the person trying to poke me, but it’s also frustrating for me, because it’s not something I’m in conscious control over. I will tell them this, and the look they give me is one that says, ”I don’t believe you.” I‘ll be, like, this is the time I’m not gonna do it. I‘m gonna hold my arms in a very specific way and they’ll be proud of me. I‘m thinking this while my left swipes toward the foe with a knife palm.

In truth, other than being tired, nothing really happened when I got the shot. Nothing bad, at least. I was tired, and I still am, although it’s difficult to discern if I’m tired because my body has become the newest front in our war with the Coronavirus or if it’s merely because I’m ancient beyond the counting of years. The worst side-effect, and I suggested something similar online, is that getting the shot makes you feel all the feelings you’ve suppressed and interred and calcified the last year all at once. That’s something you should know going in.