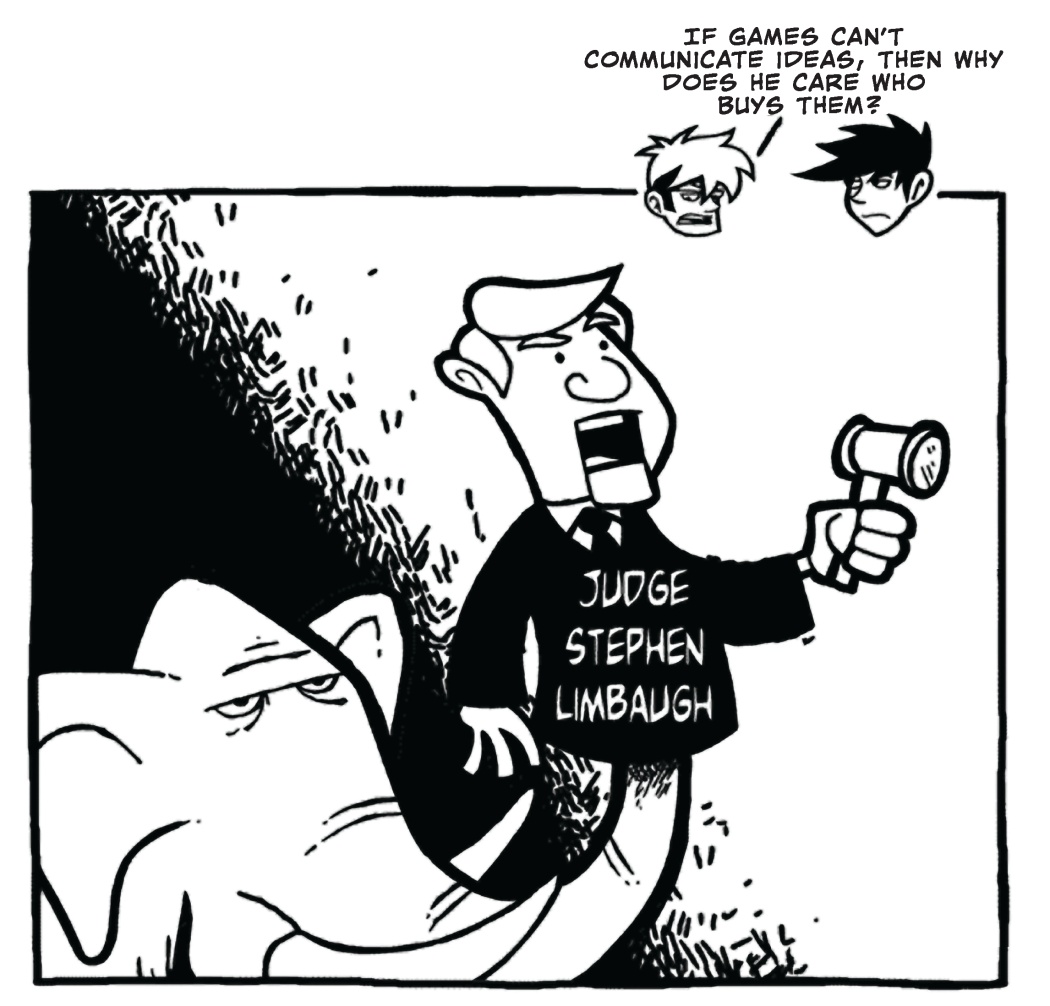 I wouldn't get too hung up on the elephant in this one - we're primarily just executing the "political cartoon" form, which has that element of ridiculous bombast coupled with intimations toward vast political conspiracy. The Lawyer of Doom has been kind enough to look at the case legally, and by "case" I mean this one, and we know as well as he does that this isn't a right/left thing. This is more of a stupid thing, more of an antique sensibilities thing, and more of a disconnect between an arbiter of the law and the modern world thing.

I used to wear my "Fuck You" shirt and start pumping my fist whenever some gaming news rose to the top American media. I have a history of it. Just so it's clear, I've actually softened somewhat. I'm not in disagreement with the the law that the judge upheld - the one that requires humans seventeen and under to get permission before they buy a game where you can shoot a man's cock off. Hey, great. If they don't get permission, they're just going to download the ISO anyway, so have your little law and tell your wife you saved the world because Bobby can't pretend to shoot a dick. I'm guessing they aren't supposed to watch interracial orgies online, either - that system seems to be working out real well.

We take issue with the grounds the decision was based on: that games cannot be a constitutionally protected form of speech, because they are not capable of expressing ideas. The article says the judge reviewed four games, which must be the standard sample required to illegitimize a medium these days.

I'll be straight-up with you. By and large, I don't like this ubiquitous nothing music I assume to be popular right now. I'm not sure that anyone actually does. If you gave me a sample of four "hit songs" fired from the entertainment industry's efficient colon, I would say that we - as a species - don't deserve tongues or hands if this is the kind of shit we're going to do with them. I would send our nation to its room to think about what it did. I don't like it. But imagine sampling four movies, songs, or paintings and thinking you had a good enough index of each form's relative potential to discount it as an avenue for expression. I haven't seen anyone else say what games Judge Limbaugh looked at yet, so I think we're the only ones who know - from his Lawyer-cave, the resourceful LoD pulled up the court's full opinion, including which products the entire industry was judged on and found lacking:

One of those isn't even a game.

Jason X makes the cut, the legally recognized expression cut (as well as the "cut into my head and gouge my brain" cut), and somehow Xenogears doesn't. I'm dumbstruck.

we need a little controversy