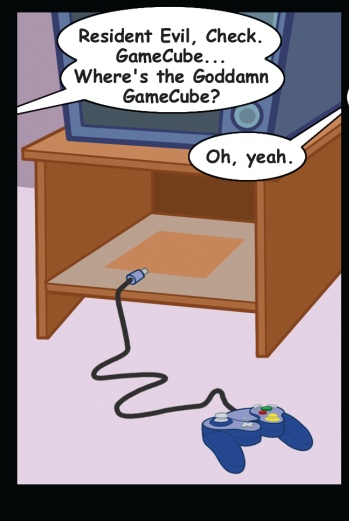 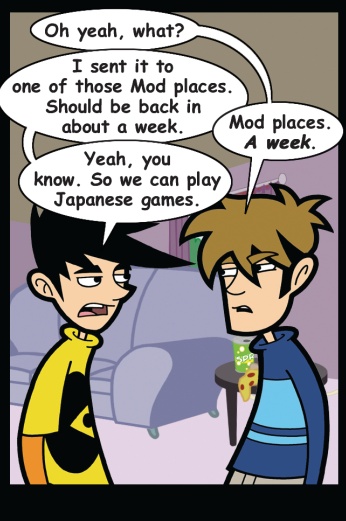 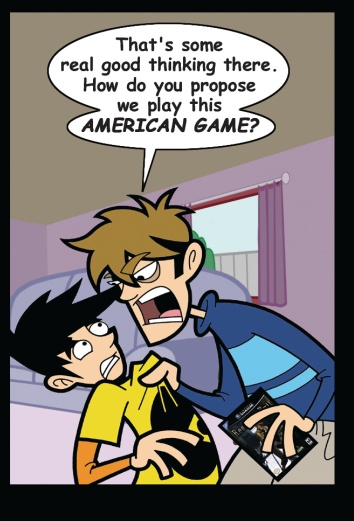 Like many of you, we've been eager in our discussion of the new (i.e., the old) Resident Evil for the GameCube. Gabe's latest free EGM gives it a clean bill of health, and the Gamespot guy ran low on adjectives in an effort to evoke its visual and aural splendor. It comes out today. Did I mention that we have no GameCube? Because I'm getting to that.

We're talking about shooting big-ass snakes and dogs whose insides are on the outside. We're lamenting the death of his receiver, because we won't be able to draw a mug of that "Dolby shit" the new RE has on tap. And then, he gets quiet. We're talking about GameCube stuff, though. Is he dead? And he's like, "Oh shit." Okay, not dead. Maybe there's a spider.

And I was like, to what? To boarding school? Where does one send their Cube away to, asshole? And how much are you actually playing your favorite console if it can be gone for two weeks and you don't even know?

I get a flash of him sending it to one of those painting places, tricking it out, putting hydraulics in it so he can bump down the ave. That would be one thing. But he's not even getting a blue LED or anything for it, he's just getting a region switch put in, which does not bump in the slightest. Though it's probably for increased activity in our Land of the Rising Fun feature, I'll bet you this Powermasters Optimus Prime I've got here that he couldn't name a single game he simply must have from Japan on the platform. I have a sneaking suspicion that, whatever the Japanese word is for Soccer, it covers ninety percent of the GameCube Shelf in any nation.

I'll close with this bit of earnest Dungeon Siege poetry from Andrew Fritz:

I think there's a lesson there for all of us. Not to mention our burros.

you stand at he bar
and you talk through my songs