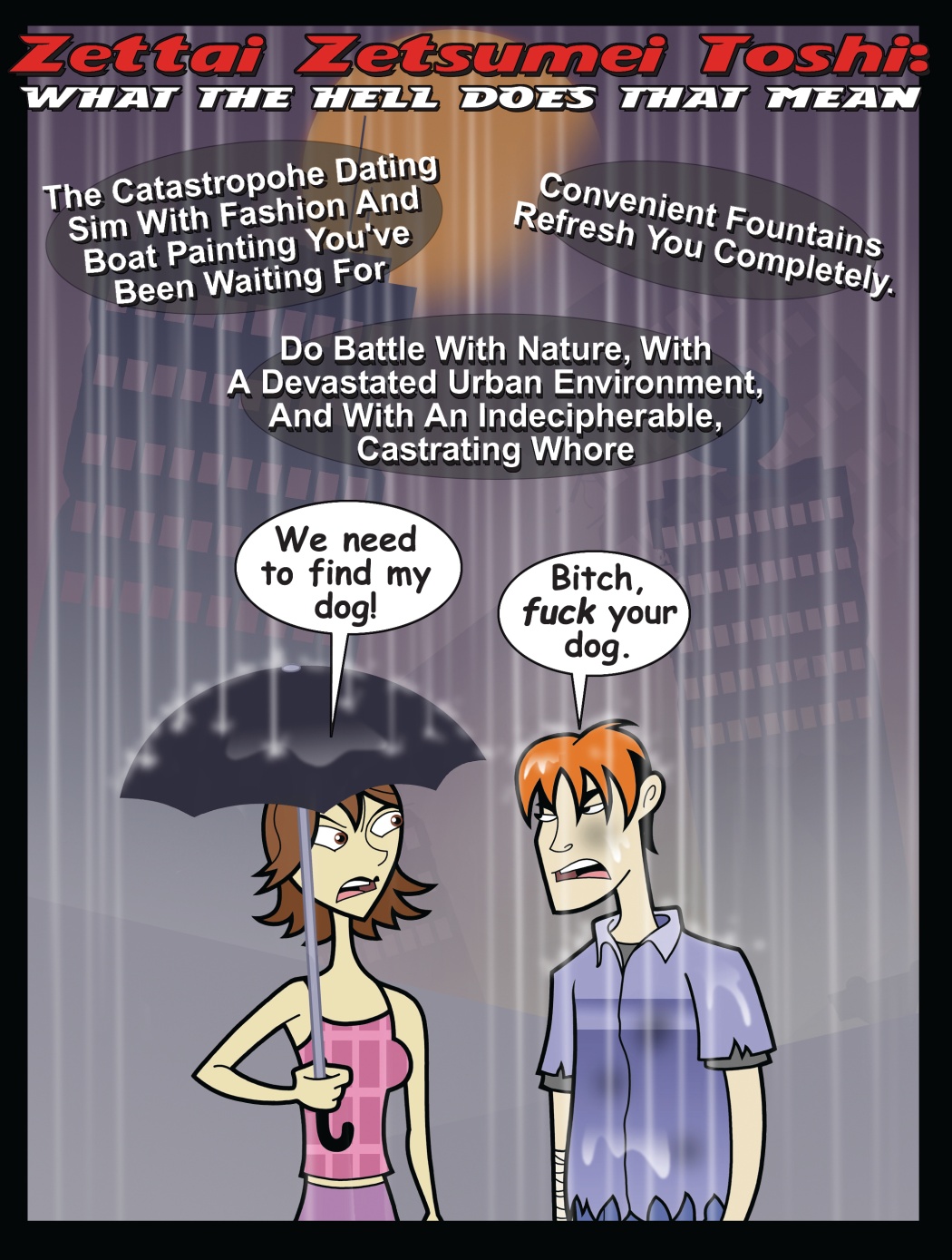 Although I was hot for the Land of the Rising Fun concept, I've definitely thought of it as a Gabe thing. An excuse to make his Neo fetish a more demonstrable facet of the site, perhaps. Maybe it is an attempt to kill me dead by writing an entire article without using a single comma. Fair enough. Really, anything that keeps him off the street and out of the public eye meets with my most vigorous applause.

The main issue is that he and I prefer different games, and that's the long and the short of it. The action genre he favors is rarely going to be hindered overmuch by the fact that Japanese - as a language - looks like rows of disciplined insects, and not really any kind of language at all. The RPGs and strategy games I crave, on the other hand, would be rendered incomprehensible (by and large) by that fact, and so I'd essentially surrendered interest. And that's when they struck.

The moment we tore into our latest shipment, something was different. Obviously, a hybrid of Action and RPG would (quite necessarily) be more streamlined than RPG alone, as the tenets of the stern Action Lords dictate. The new GBA Castlevania, which appears to call itself "Concerto of Midnight Sun," is completely accessible in my opinion - and I don't know a lick of Japanese. Some experimentation is required, yeah, but you'd have to have had a recent head trauma not to grasp this stuff. What's more, it's great. Looks delicious, you will literally see things in the first ten seconds that will surprise you. They've switched out Circle of the Moon's card shit for a new spell system, which, you know, hey. Whatever you need to do, Japan. I'm not really here to talk about Castlevania, but if questions about it start to pop up in my mail I'll gladly do so later. I've got to be honest with you. I've got something else on my mind.

Zettai Zetsumei Toshi is, as I had hoped, fantastic. That's the Playstation 2 game they're calling "Survival Horror," except with earthquakes and not Zombies, but I hardly think this game is a valid application of that nomenclature. For one thing, it has a very heavy platform element - jumping on shit, balancing on other shit, falling off shit to your death, you know what I'm talking about. The combination of mature themes and that kind of gameplay is interesting to see in practice. There's a heavy inventory management angle, which is common to what people call Survival Horror - but just about the time we're outgrowing one backpack, they give us a new one which has a spacious interior and sleeps four. In fact, the one we have now is like a Goddamn costume trunk or something as well, it's that substantial, and it's filled with hats and sunglasses. I don't even need to tell you how pleased I am about that.

Your objectives are pretty straightforward, namely to escape an artificial Island off the coast of Japan after a severe earthquake, and the pacing has been excellent these first six hours. There's more dialogue and text here than in a Castlevania let's say, but you're managing a much more complicated scenario than deciding which bat to whip. You'll meet people, emasculating people, people who will take your umbrella and they won't even care. I've seen them do it, maybe this is is a problem in Nippon. Highly cinematic, the familiar urban environment you've seen so many times before is now an absolute deathtrap, and don't get used to a building being there because odds are good you'll be wearing it as a hat here in a minute. The scenery is very dynamic, ofttimes as gamers we will take solace in the fact that something in an environment is too big to ever possibly move, like the ground, and you can make no such assumptions here. Each level - they aren't labeled as such, but you move from place to place, each with a discrete purpose, and that's called a level - involves you needing to help people and get out, while taking every article of clothing you can find and wearing it immediately, even if it doesn't go. For example, as our shirt and jeans became ever more ragged, we were clearly moving into fashionable territory, and something had to be done. A pair of safety gloves, Ray-Bans with yellow lenses, and a Bus Driver's hat is clearly not a regulation ensemble, but we had a crowbar, so it's not like anybody was going to give us any shit about it. Plus, they're almost all dead.

The game is completely unmodified from it's Japanese release, because it is the Japanese release, so even outside of me not knowing what the hell these people are talking about I feel like I'm having some kind of cultural exchange. I can't speak to this one in particular, but the story in most games - let alone Japanese ones - isn't really an afterthought, because that implies that they thought about it at all. So, in the absence of any intelligible narrative, we just concoct our own in real time. For us, Zettai Zetsumei Toshi is an allegory for relations between the sexes, and it works especially well at this because we don't speak Japanese. She will say things, and we have no idea what the hell is going on, and then we'll select from a list of responses, but we have no idea which one is the right one, and then they're all wrong. It works on a lot of levels. The crumbling metropolis is your self-determination and capacity to feel any kind of pleasure in this life whatsoever. The puppy you must rescue later symbolizes a stupid little fucker. You're given a chance to go with either a man or a woman later, which I guess might mean they're just going in, you know, different directions but I'm still satisfied with my prior analysis. We navigated a mysterious conversation tree four layers deep, talking to a woman in the pouring rain. This culminated, inexplicably, in her stealing our umbrella, which we blamed Monkey for. She still didn't look very happy, but that's because we hadn't been buried alive in wreckage. And don't think it's because she hasn't been trying.

The level of collectibility and customization in this game is strange, and I don't know if that's more common in Japanese games in general, or what. The multifarious clothing options I've already discussed, but even something like the compass that sits down in the corner of the screen has no less than fifteen different variations you can discover. There was a strange blue cannister near us, and we didn't understand exactly what it was used for - until we realized that it was allowing us to try different paint jobs on a boat. It's very small thing, but the amount of ownership it conferred to us in our own destiny (and the destiny of our ingenious watercraft) was noteworthy.

Why import something? Well, you can get things early sometimes, but unless we're talking about a fighter or some other kind of action game that's not very compelling to me. Just having a game early is no consolation when every conversation in it is going to be garbled, alien nonsense. But in a case like this, where I couldn't say for sure if it was ever even going to come to the US to begin with, yeah. That's something I don't want to miss out on. Get a couple friends over, or some friends and Safety Monkey let's say, and just make it up as you go along. If you've got the hardware to play it, I wouldn't recommend that you miss out, either.