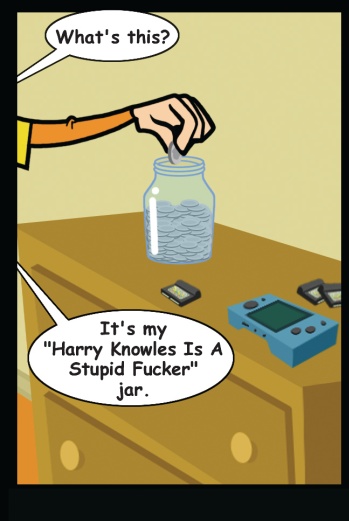 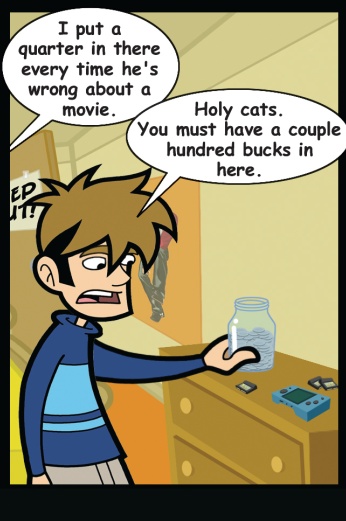 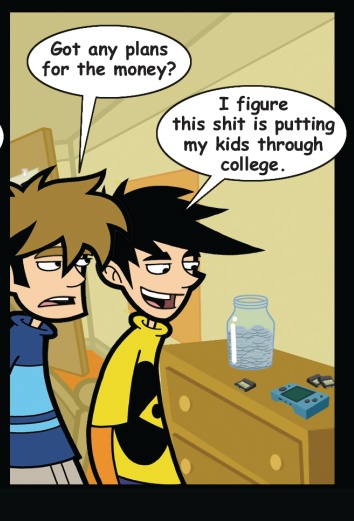 As regards our newest strip, Harry Knowles is sort of an interesting phenomenon quite aside from his extraordinarily popular (not to mention populous) website. When we disagree with him on a movie, we breathe a sign of relief - it saves us the trouble of coming up with new opinions. When we do agree with him, it's gotten to the point where we feel vaguely uncomfortable about that, because no-one likes to share ideological space with known retards. We rather enjoyed Minority Report. He's not crazy about it. There's just something comforting about that.

I love Neverwinter Nights. I don't know what the hell is wrong with us, as Batjew, Monkey, Pork, and myself played it until three-thirty in the fucking morning, which was very poor planning on my part and I do apologize for it. In my defense, rabid dogs and wild-eyed mongrels had recently overrun the Blacklake district, and they sure as shit weren't going to throw shurikens at themselves. I'd like to discuss the subject in more detail once we've actually beaten Chapter One, as opposed to just playing it over and over again every night since we've had it. I'm afraid I've already played the Neverwinter card too many times here in the post, but I'm so buoyant regarding its actual delivery and its matchless, savory execution that I'm virtually beside myself. Be thankful this game doesn't have hats, or you'd be continually subjected to an unsettling medieval fashion show. There is an excellent chance I'll be back on today or tomorrow to talk shop with fellow players, but be advised that the game is more precious to me than a fortune in rubies and emeralds, and I might just never post again instead.

Todd Johnson - gamer, Mac user, and Penny Arcade enthusiast - mentioned his hand-crafted a series of excellent PA icons for OSX, so I'm just saying what he said. Of course, these are in addition to Kiko's already noteworthy icon package which was already made available.

I never expressed gratitude to our benevolent sponsors this month, which include Arush Game's Duke Nukem: Manhattan Project, Rockstar's Grand Theft Auto 3 for the PC, and the faithful readers that have stuck it out with us for coming up on four years. The month is just about over, and though it defies conventional logic Penny Arcade's ad campaigns have outperformed those on large gaming networks - and who can say why. We refuse any kind of Shockwave crap, any audio, or animation - the magic ingredients which are now considered absolutely necessary for Internet advertising - and even without resorting to annoying trash that insults readers (aside from the comics, of course) we still kicked ass on the usual suspects of gaming coverage. That's you guys doing that, not us. I'm probably not as demonstrative as I could be regarding the continued goodwill you've shown us, but that's because it always seems disingenuous to me to fawn over people I've never met. I guess it never occurred to me that a simple "thank you" might suffice.

and wink back once everyone's gone