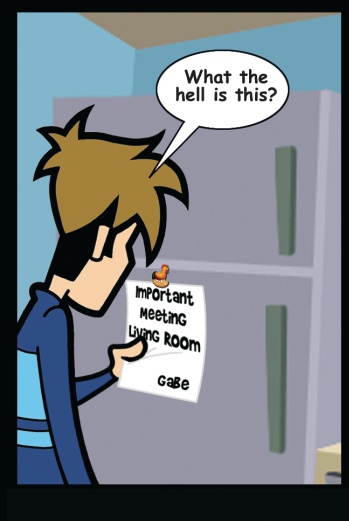 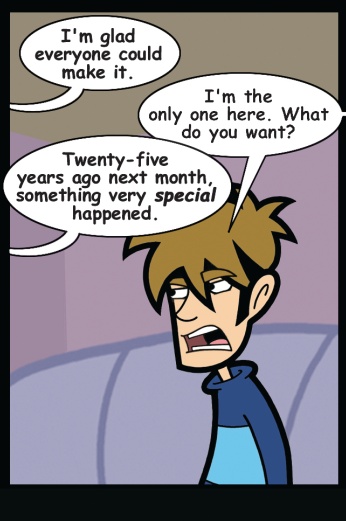 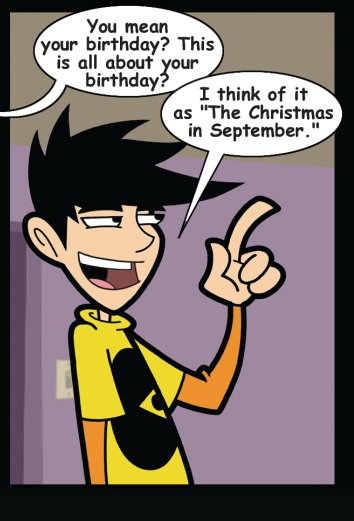 Except for (perhaps) Jesus Christ, no birthday in history is accompanied by as much fanfare as Gabe's. He's incorrigible. It's fucking August, and already I can't wait for his special day to come and go, mostly go. We haven't decided whether this strip will inspire an ill-advised foray into treacherous Continuity, but I thought it proper to warn you in advance.

I'm going to geek out about some things.

I can't find this guy's blog online, but some guy came by our booth at Comic Con a couple times, and he had in his possession a trinket I thought might be of some interest to you. The full story goes something like this: when I was working for a technology services company a few years ago, I met a guy named Ficus at an ISP housed in the same building. Ficus was way, way, way too smart. Way. Even after I stopped working there, I tried to keep tabs on him because he was so Goddamn smart I knew that he'd end up someplace that made something fantastic. I've been right about that, too - he worked at Be, and whatever some might say about their success as a company, I found their technology delicious. Also. He wound up at Danger a while back, and they were so mysterious about what they were doing at the time that he couldn't say what was up - though we did have a very nice conversation in the middle of the night, when every programmer I know seems to be awake. Well, it's clear enough what they do now - they make this Hiptop thing, which is the God of my idolatry. I've been on the fence about getting a PDA for a really long time, because they're too expensive and I don't actually need one. This thing is two hundred bucks, that's all, and it does the personal information management shit, IM shit, webcam shit, web browser shit, and the cell phone shit. That's where the guy I mentioned comes in. So, he brings it by the booth, and we were immediately prostrate to the machine like some holy icon. It's got a little keyboard, right? So he's updating his blog all day with pictures and text, and it's wireless, so... Yeah. I guess they're out next month, I'll tell you about it when I get one because I'm sure as hell getting one.

Having already imported Super Mario Sunshine, this month was starting to look like kind of a wash for games, Football Titles as far as the eye can see. Sure, I think of Super Monkey Ball 2 as a necessary purchase, but I'm not up nights thinking about that unique intersection of monkeys and balls. Also, Beach Spikers (aside from whatever cheesecake it may contain) struck me as being a volleyball take on the extraordinary Virtua Tennis series, which gamers know as one of the most perfect videogames ever created. That's not hyperbole, play it sometime. You'll be like, "Oh, okay. It's perfect." Still, nothing to inspire a bout of unchecked self-pollution just yet.

Do you remember when we talked about Moonbase Commander?

Well, it's out today. You can grab a demo here, and a FAQ here. They've been playing this game at Humongous internally for years, it was a personal project that turned into such an office phenomenon they decided to publish it - how many other games on the shelf can claim the elegance of play that years of playtesting affords? Let's say they could, for the sake of argument - how many of those would be twenty dollars? You're not going to see much of a media campaign to support this game, in fact, I wouldn't be surprised if this is the only place you saw it aside from the odd review. Don't be fooled. The game is fabulous and original in ways I can't relate with language. In late September, our 2v2 Moonbase Commander tournament will whirr to life - the grand prize being a fuckload of entertainment software and the chance to challenge the producer and the creator at their own game. The chance of you getting it is very slim however, because Monkey and I are going to eviscerate you, so do not entertain thoughts of victory unless you are some unique variety of masochist.

I haven't done another fabulous Triple Threat giveaway yet, not because I haven't accumulated sufficient largesse, but because I've been too busy to distribute it. Well, I'll be bringing it up to Canada to dish out, you can be sure of that - signed Wonderverse comics, kick-ass starters and boosters from Sabertooth's Warhammer 40k card game, exquisite Iron/Jadeclaw books and miniatures from Sanguine... Should be mighty fine. Also, some of this stuff is probably Gabe's, actually I know it is, which makes it that much more fun to give away. 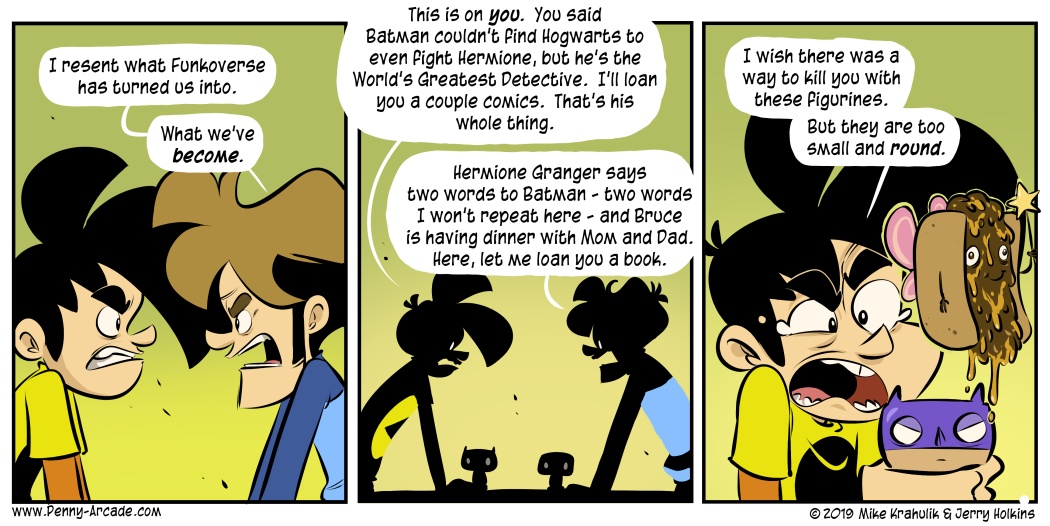