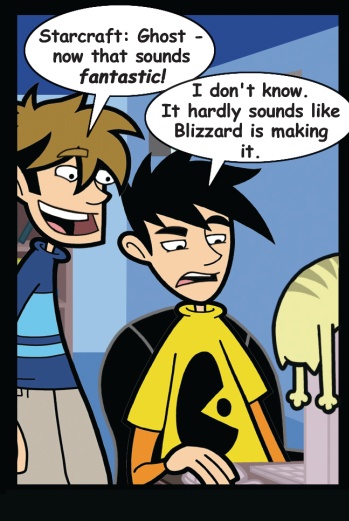 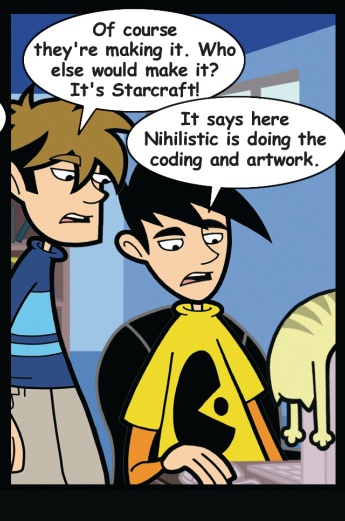 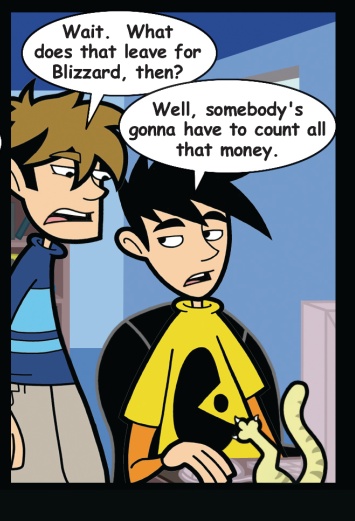 So, now we know what Blizzard was planning. While it would have been nice to see a tactical FPS with a strategic overlay, I am not displeased in the least by this announcement. The issue of who exactly is doing what on this game always seems nebulous to me, where Nihilistic Software ends and Blizzard begins - we deal with that in the strip - but a reasoned analysis tends to allay any fears I might have. Lord Of The Clans was an internal project and they killed it, even after years of investment. They aren't likely to release anything with their name on it that isn't at least "very, very, very good." What's more, while we think of Diablo as a Blizzard game, the people behind it - Blizzard North - were once a studio called Condor, picked up on the strength of their proposal. Blizzard is in the habit of making very good decisions, so if they think Nihilistic has the sauce I'm going to call it good.

I need somebody to tell me what the fuck is going on with the copy protection on Battlefield 1942. If I may, I would like to be frank with Electronic Arts, and publishers in general about these technologies.

I fit into a certain class of gaming/technology enthusiast. There are still things that are fundamentally mysterious to me about computers, but I know where everything goes - I can build machines, I can fix machines, and I have friends for whom I build and fix machines. I'll spend two days trying to tune my 3DMark Score. I think of my enthusiasm for computers as a sort of vocation, and the real-time management of logical systems (also called "gaming") is something I take very seriously indeed. The precise curvature of my smile and the the performance of my machine are directly proportional.

So, when I go out and buy your Goddamned game, and you proceed to rob me of my time and clock cycles with copy protection schemes you imagine secure your bottom line, please let me assure you with the utmost gravity that you are living in a fantasy world. You might as well be drinking fairy wine out of an acorn cap, discussing the finer points of Gryphon Husbandry with their comely queen. The only people these Goddamn mechanisms of yours screw are paying customers, because people who just want to steal your game have always had very easy time of it. You are credulous in the extreme if you perceive otherwise. Put it out of your mind. I said, put it out of your mind.

Me, I want to buy your game. I'm on your fucking team! But I still don't tolerate your attempts to stymie my device. When I take your game home, the first thing I do - well, after I download patches for a game you knew was broken when you mastered it - is acquire readily available versions of the executables with your stupid crap removed. I feel no remorse whatsoever. You got paid.

The reason I delineated my point in the technical continuum earlier is to illustrate a concept to you: I have no idea how your fruity SecuROM or whatever thwarts my computer. However, that is a matter quite apart from my ability to negate it. There are websites everyone knows that contain your mystical secrets, splayed sensuously for our delectation. And even if I exaggerated before - even if everyone doesn't know where to find this stuff - everybody knows someone like me. When you put out a patch, a patch minus your garbage comes out the same day. If you don't know this, I'm not surprised. If you do know this, why do you keep rolling that boulder up a hill? There's a halfway house for retardeds like you right across the street from me, you'd love it. They just circle the block, singing songs and drinking Pepsi. Sometimes, they lay by the tree and drink the Pepsi. I never see anybody drinking anything else over there, maybe you get in trouble. It's either that, or Pepsi sponsors congenital defects.

I want to applaud Bioware for simply removing this garbage from Neverwinter and giving me my computer back. People complained, they removed the check. That's how customers and companies work together. I don't want to seem callous to the needs of knob-slobbing corporate fuckheads, though. I know when you're all coked up it's hard to know which voice to listen to. Should I fuck that bitch? Should I suck that cock? Should I remove the SecuROM? It all runs together.

it's one for the money