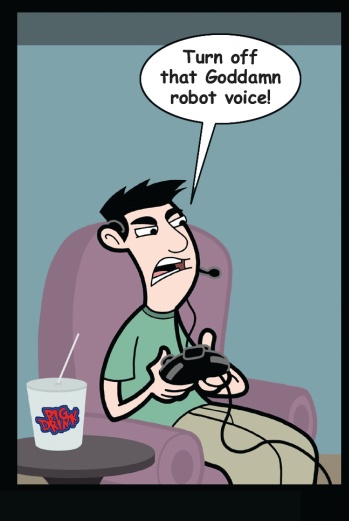 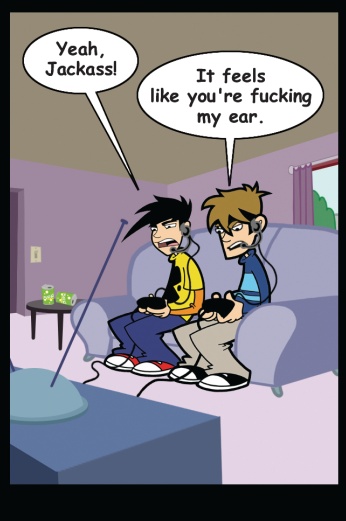 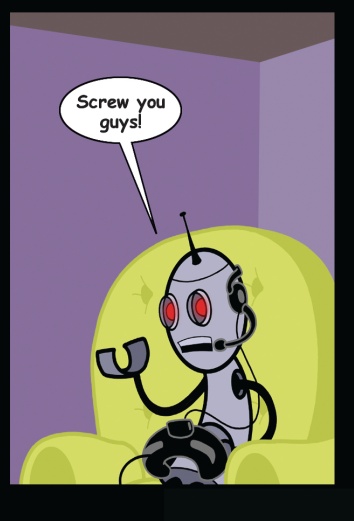 During Saturday's Mechassault indiscretions, a young man persisted in using the Robot voice mask. While I certainly prefer Robot to Child or Cartoon, no voice mask is always the appropriate choice, and we made ourselves clear on this point. It didn't help matters that he was continually singing robot sea shanties or whatever that shit was. I eventually just went and muted him permanently - instructing others in the exact procedure - and the entire server choosing to believe he did not exist prompted his early departure. It occurred to us that perhaps he actually was a robot, in which case it's not really his fault if he sounds like one.

We played Neocron for just over twelve hours on Saturday, and we were provided with a sort of futuristic Tour Guide to show us around and keep us busy. The game is, at its core, a hybrid of first-person shooter and massively multiplayer role-playing game, in some ways resembling a Deus Ex with online capabilities. Gabe had never played a game like this before, and he didn't understand why one must pound tiny creatures with rudimentary weapons at first - but I assured him that, as excited as he was about Star Wars: Galaxies, the likelihood of him having to strike Womp Rats with Gaffi Sticks was fairly high. It's just something that this genre does, and whether that's a good thing or not is a personal matter, like hair care.

The Pluto server we were on is stationed in Germany, which was hard to believe, as there was no discernable lag the entire time I played. Entering the game's PvP continuum is a personal choice, and involves the removal of a chip from your brain. Taking the chip out increases the experience you get, so there's a reason to expose yourself to danger even if you are not a homicidal maniac. We saw that sort of thing happen, by the way - I'd leave a store, and guys with Gatling pistols would come around a corner and open fire on other players, until police robots would put them down. Joining corporations, another reason to remove the chip, lets you take part in another side of the game that happens out in the Wastelands - the capturing of facilities which are of value to your group. As I understand it, these captures also affect each faction's value on a functional in-game stock exchange... It was a pretty overwhelming experience, doing a game day in something that has so much to it. Keeping people together during that stretch of time was a bureaucratic nightmare, but frequent rap battles between myself, Gabe, Lilie, and Spectral kept morale high. Also, Gabe and I took the time to send spam to each other's Neocron e-mail accounts, which we felt heightened the realism factor. The complaints I have about the game are in the stability department - I filed two easily replicable crash to desktop bugs during my twelve hours, and saw other crashes which were bizarre and may have originated on alien worlds. I guess that's how it is in most launches of this type, but that has never really been satisfactory reasoning to me. The content is there, though. And they're doing a lot that no-one else does.

It sounded like people took advantage of the other game servers when we couldn't be there on Saturday, and this brought me joy. It's funny, though - I checked the UT servers on the list we had frequently, and all day Sunday I saw only two people - over on Zach's laptop. The games it seemed people really wanted to play were Battlefield and Natural Selection. A new patch for NS came out mid-way through the event, allowing the largest game I'd ever seen played, with more names than could reasonably fit on the stats screen. And Battlefield, I mean... Damn. Andy Whitehorne leveraged the power and vigor of the NC State network and his Alienware machine to host a 56 player Battlefield 1942 juggernaut. I know that, historically, the Axis had some trouble where Stalingrad was concerned. I'm here to tell you we had it harder.

Nothing in my power will make Gabe reinstall his HL, not like it would have made much difference if he had. He plays Mechassault all hours of the day, fervently maintaining royalty status and indulging in displays of naked aggression. It's pretty hard to stay away from that game, and when I wasn't hitting the PC titles for the event you may be sure I was playing Mechassault. Mechassault guys, if you're reading this now, you have made a very good game - one of the finest pure multiplayer action games perhaps ever. I am not exaggerating my comments to please you, the things I am saying are true. However! Some of the ways you have chosen to implement your online features are wonky and inexplicable. One wonders why, after checking for online content, one is kicked all the way to the beginning of the game? Also, a better way to set up online matches might have been a "server" style system, where players may remain in a game until they get tired of it and leave, instead of simply playing one game and then being kicked out into the lobby. This is only an issue because your game is good - the rivalry between the four on four teams is real, and deserves the option to be immediately satisfied. One wonders why groups of players may not set themselves up in "Lances," and challenge other "Lances" online. I also need better tools to sort my Friends list in Xbox Live, but that's not your fault. Don't take this stuff too badly, the only time I really think about it is when I'm not actively blowing shit up in your game.

Barring a small number of very private acts, there is nothing I enjoy more than making Penny Arcade. Thanks to everybody who came out and played, and thanks to everyone reading this now. I think you're marvelous people who really care about animals.

i got no reset for this game