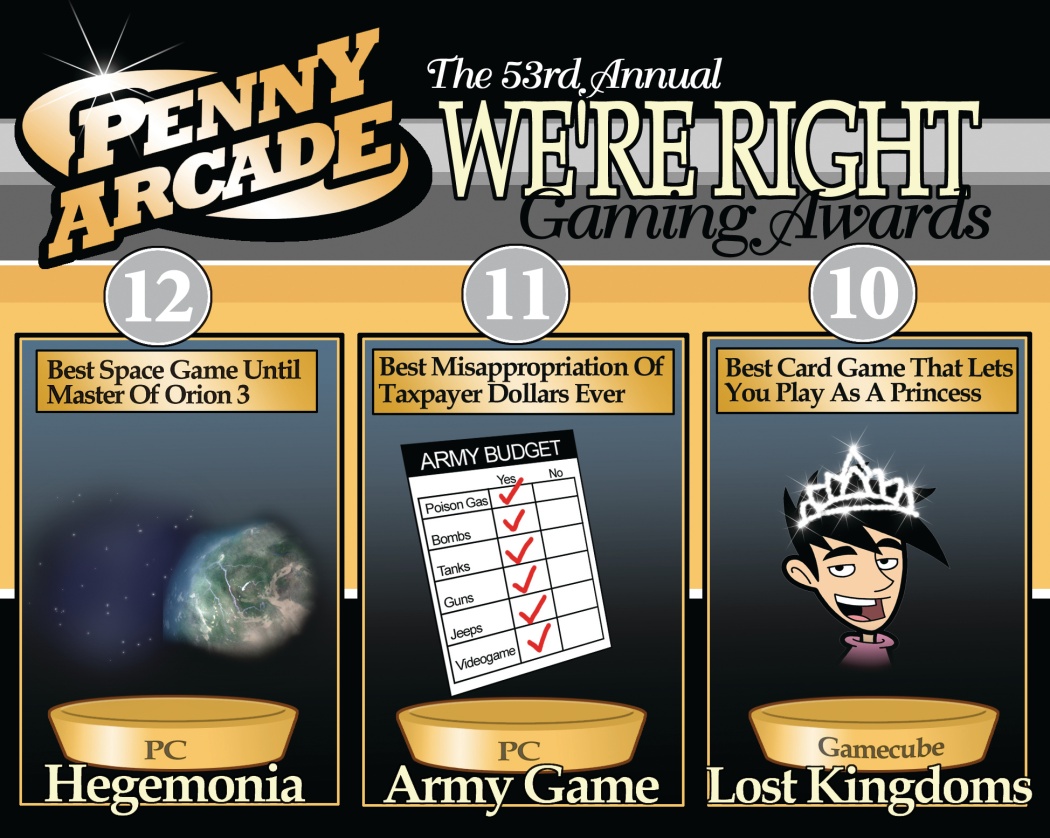 I would like to welcome everyone to the 53rd Annual We're Right Awards. Here's the first part of the Ceremony itself, let's talk a little bit about how this is going to go.

It is almost impossible and perhaps very silly indeed to propose a list of the finest games in a given year - one that crosses all platforms, genres, and also insults human decency. I am proud to say that we have done this with the easy grace God has invested in the idiot. Against sense, all intellect, and every law man has laid down we present to you the games that have clambered atop a pile of skulls to issue an evil and animal sound.

They are the experiences of these twelve months past that touched us, sometimes a naughty touch, and sometimes a touch like wonderful light, like a pure memory held fast in a jam jar. They are rated by quality, to be sure, but games that come out of nowhere to excel beyond all expectation deserve recognition for their unlikely feat. You will see many such games in today's segment.

The envelope please. Oh, you know perfectly well which envelope. Thank you.

12. Hegemonia: Oh, I tease because I love. Even when Master of Orion 3 hits shelves, it must still by rights answer - if for nothing else - to the luxurious beauty of Hegemonia. I have no complaints about the game, either, at least none that I feel aren't trite in some way. The game is a bit obtuse in places, the way you used to expect a PC strategy game to be, and I am all appreciation for it. I don't mind if a game makes me work, so long as it pays out like a Vegas jackpot.

11. Army Operations: This game could have been miserable, and I think that was the expectation. We have a fairly discriminating group here, one that plays (and complains about) nearly everything, and the Army Game is now the game of choice on any given night. It got off to a rough start, which everyone here is aware of. But then it came up off the ropes like a prize fighter and starting hitting people in the head.

10. Lost Kingdoms: This game single-handedly broke Gabriel into RPGs, something I've been trying to do without success for the better part of ten years. It's hardly a roleplaying game at all, which may have been its secret weapon. A collectible card game with a fast and fun battle system, it had just enough resources (cards) and management of those resources (I'm still talking about cards) to make him think, "Hey, maybe I'll try them that there Final Fantasy." Then, he was lost.

I think these ceremonies are a good way to go over the games in a year, but remember that these are only the top twelve, and it doesn't stop there for some reason and all of the other games fall off into the darkness. For example, thirteen is Moonbase Commander. There are omissions in this list that only a longer list would resolve. I stand firmly by our choices, it's just that this has been a hell of a year for gaming. If you find yourself filled with rage about these choices for whatever reason, make your own list in notepad and wear a party hat. Think about all the special times you can have.

Heading over to Goddamned Spokane again tomorrow, but retrospectives here and ceremonies in the strip will continue unabated. God, I hate Spokane. I don't see why Spokane can't come over here every once in a fucking while. If you want to be destroyed absolutely and have your entire life come to nothing, load up Kazaa Lite or whatever and steal the song "Christmas In The Northwest," by the Devil. You may want to keep a gun handy.

a gift god wrapped in green