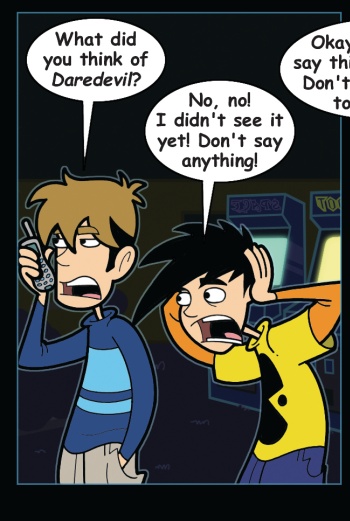 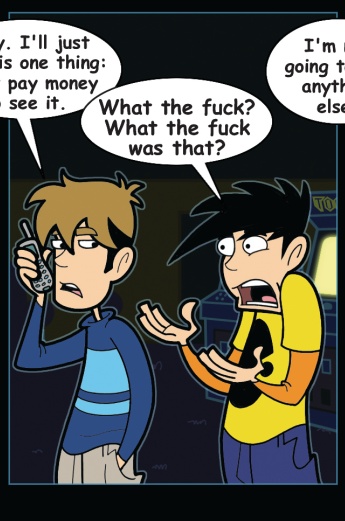 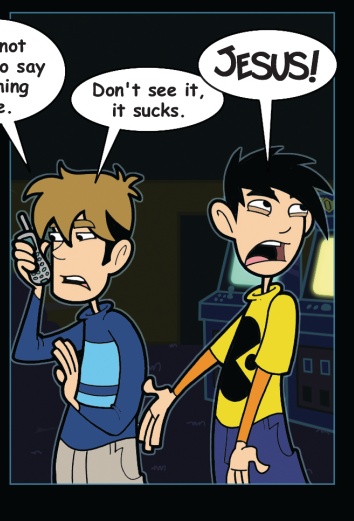 Today's strip may steer you wrong, as I am only messing with my associate Gabriel and not giving him factual data. I suffered very little over the course of the movie, and (in fact) rather enjoyed many parts. I was able to see it on Valentine's Day, yes, but that isn't to say I saw it with Brenna. She might vote pro-geek in an election, but she's not a member of the party. It is as though she's come to terms with some disease I have.

I am patiently awaiting two scrumptious GBA SP systems today, hopefully I won't miss the delivery fairy. The "Platinum" is for me, as I have an outfit that I think would go great with it, and the "Onyx" is for Monkey, as payment for his article on the new Zelda. Is there a better editor anywhere on the planet? I ask you. I typically leap head-first into this importing thing because I haven't had any bad experiences yet, but I think I might have jumped the gun this time. Instead of separate batteries, the GBA SP does the lithium-ion thing, which under most circumstances I wholly endorse. The thing is, I'm sure it's going to come from Japan with some bizarre AC adapter that has a cat coming off of it or something, whatever it is I'm sure I need to deal with some voltage thing or other. I'm also sure I know where to fix it, but I've always found hardware stores so emasculating.

Gabriel mentioned the other day that EB (I think) had some kind of promotional thing set up to let you trade your GBA and fifty-nine bucks for a glimmering new SP, but most of the people I know have Afterburners installed - I doubt the Exchange Lords at Electronics Boutique will look kindly on Game Boys whose sensitive nether regions have been so augmented. I gladly gave my old one to a friend who was going to Kalamazoo, which I assure you is a real place, but in the meantime that leaves me without any kind of console whatsoever that isn't sequestered away in a Uhaul box. The only things left out, really, are the PC here and my katana, the infamous Arbiter of Kyushuu.

I read an article regarding some connectivity issues with C&C Generals, stuff I can't confirm or deny because I usually need to complete a campaign or two to find out who I'm playing as. Kiko has lamented many of the same problems, so I don't doubt for a moment that there is something to complain about. Though I have never fully resolved myself to the zero-day patches that have become so commonplace, there is at least a portion of my brain (some kind of cortex?) that understands why there are business or technical realities that might make it happen. I'll tell you what, though. The shit that's going on now has no place. C&C Generals and Battlefield 1942 - both from EA - both have patch patches out or on the way. This is some Tribes 2 shit you've got going on now, and if you want to see just how completely you can erode the good will gamers have toward a franchise, please continue along this path.

Under the right circumstances, and with the right people, I can be very charismatic. I would ask that you good-for-nothing, power-lunching child predators take a moment to truly consider what would happen if a hundred thousand of the hard-core just stopped indulging your stupid asses one day.

it gets better and better 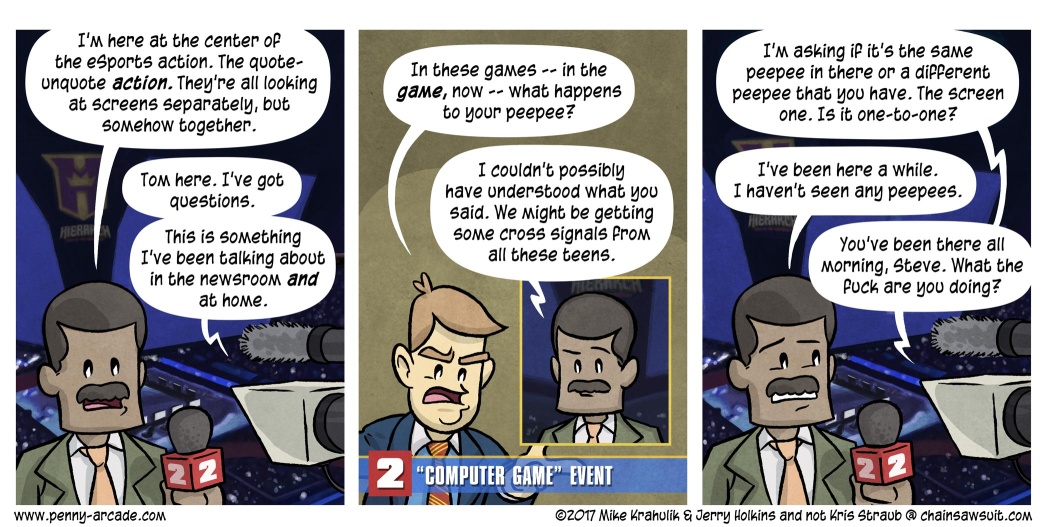