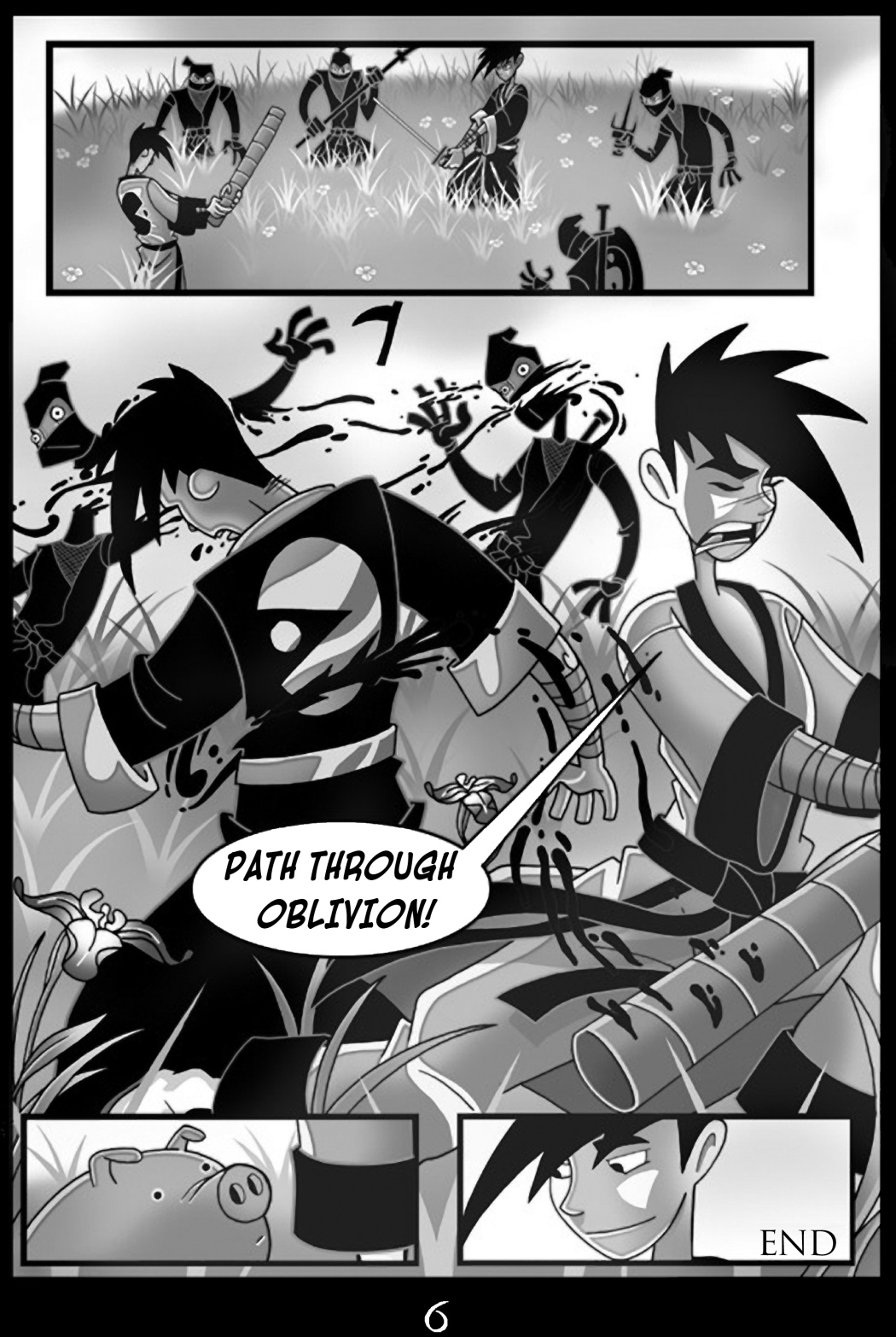 The sixth and final page of Cardboard and Steel is up. This story encapsulates everything else we do with the CTS that is "narrative" in any way, with future installments named along "The Wandering Age: X" conventions. God only knows when we would do something like this again, or what form it would take - even though it was highly enjoyable for us, I doubt any return to the topic will be soon. We are dedicated adherents to "the path of least resistance," and this much extra work for a daily update is highly uncharacteristic of us. Although, if you just can't get enough of it (which seems inconceivable, but we live in a world of deep and enduring mystery), don't forget that the full color version goes out to Club Members this month along with the sixth page of Over Easy.

Inbetween imagining tales for samurai who fight using garbage and flipping through Wizards' (excellent) new d20 Modern, I have been wondering if our world is fucking insane.

I won't afflict you with the entire litany because I don't think that's why people read the things I write, to be exposed to surreal political views which are completely unmoored from reality. I would, however, draw your attention to the following article, which details a congressional hearing on the links between terrorism and, um... peer-to-peer file sharing.

John G. Malcolm, deputy assistant attorney general in the criminal division of the U.S. Department of Justice, did say there seems to be some connection between illegal copying and organized crime, in that many of the groups profiting from illegal copies are highly organized and can have international distribution networks. Organized crime often supports terrorism, he suggested.

"These groups will not hesitate to threaten or injure those who tend to interfere with their operations," Malcolm said.

This is the first statement I have ever read where Manga speechlessness - "..." - is the only valid response.

Statements of this kind gnaw at the sensible mind, they chew on it and try to eat it. I won't even gauge the clumsiness with which these two incongruous concepts are lashed together. If you want to see triple-x, explicit evidence of corporations with their hands up your government's ass, working the their jaws like some malevolent Howdy Doody with chilling ramifications for personal liberty, well, there you go. Peer-to-peer file sharing and Terror? Terror? Do they not have dictionaries there? There's another T word you cocks might like, too - give it a try: it's called "Tenuous." The only people terrorized by peer-to-peer file sharing are vastly potent multinational businesses, gripped by the realization that they sell carriages in a world of bullet trains.

I mentioned Amplitude on Wednesday, and just so you know the PSM I grabbed yesterday has a playable demo of it on there - it's got two songs and three or so difficulty levels. I was hoping for a chance to play around with remixing, alas, that was not to be. I comfort myself with the knowledge that the release is only ten days hence, at which time I will get down immediately.

Also - you might have noticed the X-Arcade spot to the right of the post. You might be familiar with them already if you're into fighters at all, as their multiplatform sticks have drawn high praise from virtually every quarter. X-Arcade, like Sega next week and Nintendo soon after, have decided to try short runs with us to see if we're worth investing in. Without putting too fine a point on it, I need you to prove that we are.

say i'm the only bee in your bonnet