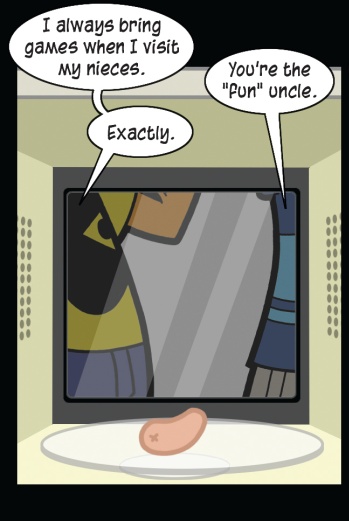 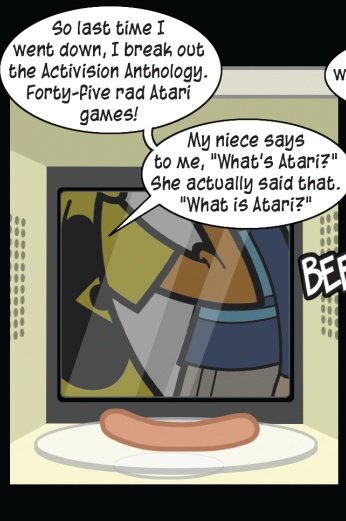 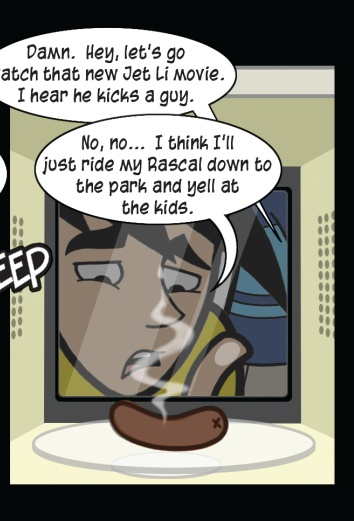 We continue to produce comic strips.

This just in, from our Omphaloskepsis Department:

Nightly gaming with the group has resumed, after a hiatus of unprecedented length. The game that did it wasn't Freelancer, as I was starting to think, or even Generals, which has gathered something of a following crew-wise. Now that Gabriel has a computer worthy of the title, Battlefield 1942 (and the Rome expansion) have consumed every evening since his purchase. I know there is some tension about whether or not Road to Rome is a worthwhile investment, particularly in the face of two solid, free content drops for Unreal Tournament 2003. People said the same thing when Quake III: Team Arena came out, as you'll recall. I love UT2k3, I loved it even when you weren't supposed to. The latest Bonus Pack is almost breathtaking in its scope. The problem with the new UT is that it has several compelling gametypes under the same conceptual roof, and a surfeit of servers up for people to play on. That doesn't sound like a bad thing, but as a practical matter there are rarely full games of the types I want to play at the times I want to play them. With Battlefield, you've only got Conquest and CTF to speak of, really, and though CTF is more fun than I expected Conquest is really the point of the game. As a result there are always a few games with 60 pings just on the verge of 32 players waiting for our crew to lay shit out.

Generals might have been an interesting choice as a crew game, and I'm still quite committed to it myself, but real-time strategy titles simply don't lend themselves to hopping in with a four or five man group and playing for a few hours. Ground Control might have done that, and Battlezone II, to be sure - but games that follow a more tried and true approach to the genre and don't manhandle its conventions don't seem to work right, for our group at least. Generals is, in my opinion, and excellent, creative game, but it has rough technical edges (being slowly ground down by patches, I suppose) and some steep-ass sysreqs that serve to keep people out. Their matchmaking is as ugly as sin, but I suppose that's neither here nor there.

Our Nintendo hook-up has come through again, delivering unto us the new Zelda und Bonus Disc. I'm told by my associate Gabriel that it looks very nice in progressive scan, and if I were some kind of home theatre weirdo maybe I could clap my hands and do a little dance or whatever. He still hasn't quite forgiven me for playing the import, as he and I had a pact not to watch videos or look at screenshots or read about the story, but then I did all those things. In any case, I'm glad that he can see now what I've been talking about: the way tones play with each strike on a foe, the imaginative visuals, and the centerpiece Link whose eyes convey volumes of context and meaning. You'll see, you'll see.

I wanted to note that if you enjoyed ClanBOB, artist/writer guy Dan Jaaren has produced a Long-Form Thing and has chosen to distribute it in an interesting way. They also asked me to write a forward for it, which I did with a glad heart.

Cat Update: name has been changed from "Pounce De Leon" to "The Great Catsby." Please note this for your records.