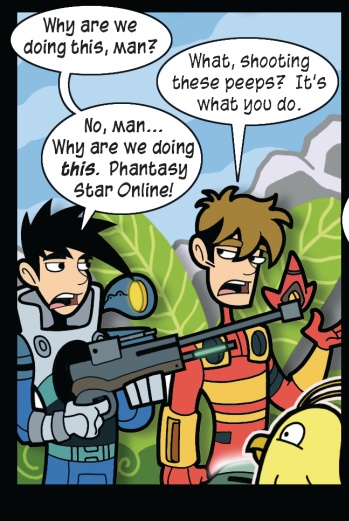 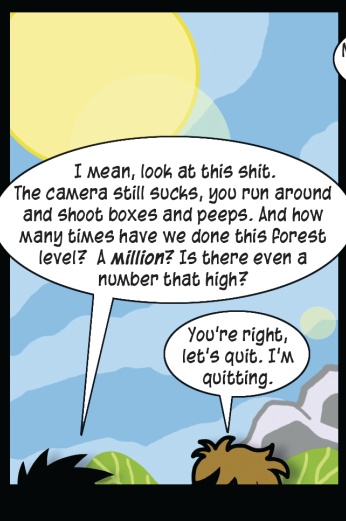 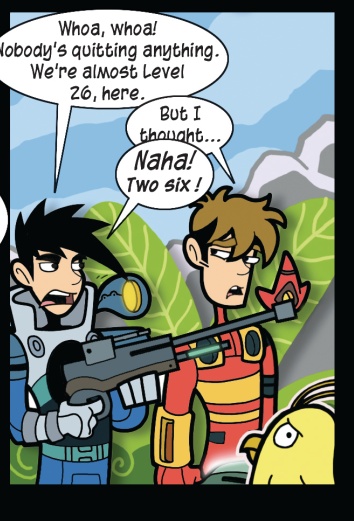 As I mentioned a few days ago, we escaped Microsoft with nearly a hundred dollars in office supplies and copies of PSO. As I felt instinctively, the best and worst things about it are that it is still Phantasy Star Online.

We skipped out on the Cube version of PSO, even with the classic games you could upload to the GBA, as the voice options from Live seemed to be worth waiting for. We had voice support even in the Dreamcast version, you understand, but that was because we ran as many as thirty feet of cable from the PC to connect our GVs. You might also have seen that the Xbox version contains an offer for a keyboard adapter that plugs into the second port on the gamepad - despite their most strenuous proclamations, apparently a keyboard on the Xbox is not such an unthinkable proposition. Interesting idea, I don't really know if I need something like that. If games start to routinely allow USB device support of some kind I may step up.

The Diablo comparisons always come up, and I think they're valid, but I think we need another term for that style of gameplay. "Hack And Slash" seems ungainly in our world of light-speed inventions, but Diablo articulated the tenets of that style of game so well that it just stuck. So yes, like Freelancer and Harbinger, it's Space Diablo. Twelve visually appealing classes run the gamut between shooting, hitting, and casting, differentiated by varying levels of ability in each. Parties hit the surface in groups of four to maul Robot Cats and a host of other futuristic dangers. If you beam down to the surface alone, hit a few boxes, and feel like you're missing what's so great about it, you are: Phantasy Star Online is about kicking ass as a team. Out of the hundreds of hours I've played the game, perhaps a single hour of that was by myself.

The game is really meant to have a single person on the screen, a single player, which is why it isn't any surprise that the split screen modes are wholly unsatisfactory. It is a nice gesture, but in practice it is not sensible. The camera - passable, by and large, in the original - quickly becomes a nightmare world of fiends and garish harlequins in two-player. Adding insult to injury, the two players must be together at all times - people constantly pop up to an orbital ship to purchase what are, in essence, space groceries - health, resurrections, that sort of thing. You're also given the option to return to orbit when you die. If you do either of these things, however, you take your friend with you - no matter what they are doing. It becomes easier as you attain levels and abilities to raise your companions, but that is really beside the point. In addition, I think we've been spoiled somewhat by Mechassault, which allowed you and a friend to go online from the same box and get down. Though that would be a natural fit for Phantasy Star Online, it might have required extra work.

What is really required is a true sequel to the original, one that makes its technical assumptions based on modern hardware specifications. The mind reels when considering it, the feats such a game could perform. I won't bore you with my fanciful conception of what shape these wonders might take, but I do think it is time for them to stop releasing the same game over and over again. Not just because it is bankrupt in a moral and creative sense, but because for the life of me I can't stop buying them.

The $8.95 monthly fee for the Hunter's License doesn't bother me as much as it used to, mostly because you can play the game quite a lot in the space of the free two months. What's more, you'll be in a very good position after that period expires to make a reasoned decision about the game's worth to you. If you're routinely meeting friends on there to shoot huge badgers - and people were making friends even on the DC version, with no microphone to speak of - I mean, there are scenarios where that might be a perfectly valid decision. If this is your first time playing PSO, and you're not currently into Verant or Mythic for their monthly fees, I can see that making a lot of sense. It is a good game, even with the warts, and even if those warts have been ported over from the original version two years ago.

I guess that's it.