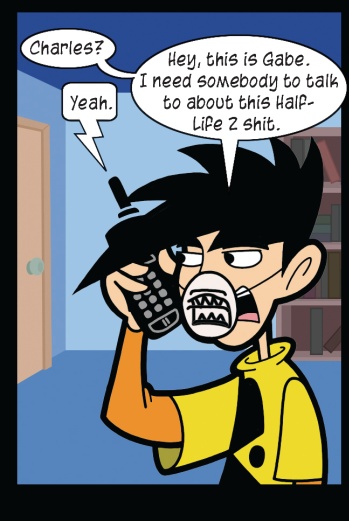 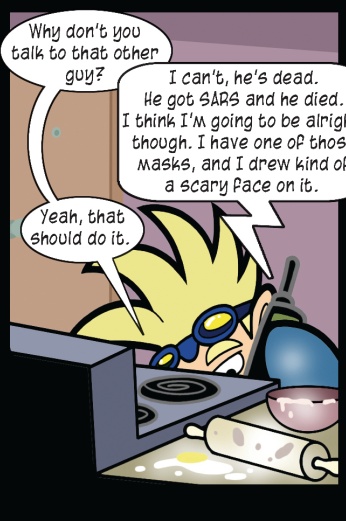 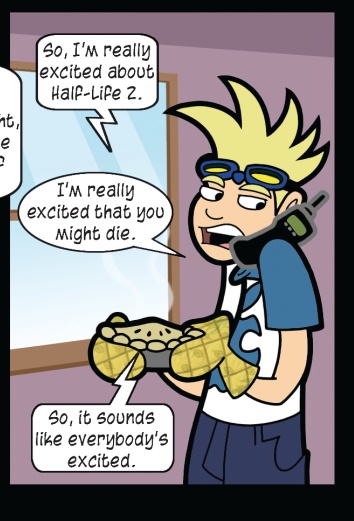 Gabriel has an affection with older characters we've made that, to me at least, smacks of a fascination with continuity. Clearly, events like the recent Cardboard and Steel show that continuity can be trained and mastered - acceptable, under controlled laboratory conditions. If it were up to him, it would be Charles this, Frank that, etc. In short, it would be the anarchy which is his stock and trade.

Half-Life 2, though. That's something to sing about. Apparently the Non-Disclosure stuff gets lifted on the 28th, and though I am very excited about what they plan to do, I don't have any interest in speculating about it. Threads in the hundreds are commonplace on the topic, and they await you virtually everywhere else. I'm actively trying to keep it low-key and not think about it too much, because once I start extrapolating from existing data the process takes hours to iterate.

There appeared to be interest in my discussing A Tale In The Desert, and so I will happily commit to that. The ads are also down now, not that they would have changed what I'm about to say, I just would have felt stupid talking about it with them over there.

To begin with, it's sort of strange how we came to be affiliated with them. The reason I'd heard about the game to begin with was that people who read penny Arcade are constantly exposing me to things, sometimes erotically charged videos but just as often interesting independent games. Indeed, these same readers convinced eGenesis that they should advertise on the site, and they did - without even knowing what we were. I actually called Andy Tepper (president of the company) to talk to him about his game, and he said that he was surprised that the interest from the ad had been so good when we weren't even a games site.

"But we are," I said, getting a little defensive. "We totally are."

"I thought you were a comic, like a comic book or strip."

He had no idea. He just jumped out there and spent money because his users said so. It was money well spent, because our readers are awesome, but that is beside the point. He just trusted them. Trusting users is at the root of A Tale In The Desert.

The reason I called him in the first place was because I wanted to see if he was crazy. The game is brilliant, I'll just get that out of the way right now - you can grab the client for Windows or Linux and find out for yourself, it has a free trial. The concept for the game is preposterous, almost, and I understood immediately why they had to publish it themselves if it was going to be published at all. The game is nothing less than a grand social experiment. All players are attempting, simultaneously, to create a society. There are various Disciplines to train your character in, and there are tests to prove ability in those disciplines. Would you like an example?

I'm trying to gain notoriety in the Arts, and the first test for me was to gather together the materials for a sculpture. The sculpture isn't just a single model that is produced once you have the requisite stuff, here you go, there's your sculpture. You actually construct it, look here for examples. That's pretty cool, in my opinion - but that isn't the whole thing. Twenty people must come and admire what you have done. That is a big part of the way the game works, while there are may things a skilled person can accomplish on their own, everyone is playing this game together. There are also fireworks competitions, with fireworks whose parameters you construct.

The social element hits you the moment you start the game, because you aren't yet a citizen when you log in - you need to seek out a Mentor who can show you the basics. I wasn't sure how that would play out, and while your own mileage may vary my mentor experience was profound. "Nyoka" (of the RidgeDwellers guild, incidentally) never broke character, and while I learned the basic skills needed to play the game I was also taught about Egypt and how our legal system worked. I even learned about cross-breeding plants to create new strains, which I think is something my mentor just tossed in for good measure. And while I could build fairly basic machines, I could see even in the area that I logged in devices of wondrous complexity that had the capacity to speed up the chores I was even then learning to do. The idea that technology in the game is advancing because people are discovering new technologies that can improve their lives is sort of a big idea for this genre.

Because it's a social experience that is so player directed, I mean, I could talk about it virtually all day. I won't, but I could. If you play Massive games to craft things, you owe it to yourself to explore a game where that's all you do - from machines as simple as a drying rack to concepts as complex as the social order.

when we're all in one accord