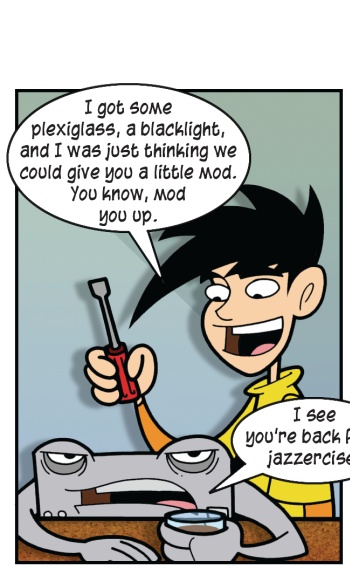 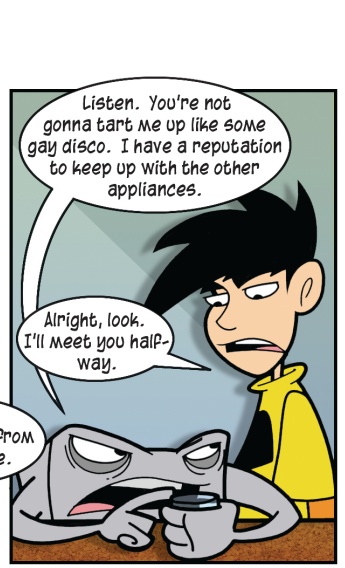 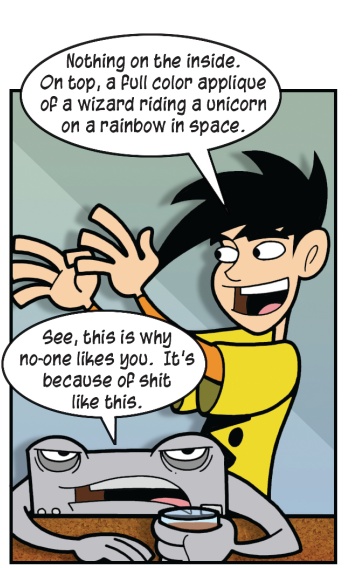 Gabriel is now trying his hand at the Modder's art, which has not been met with universal enthusiasm. For my part, I already practically run a home for machines he abuses, and that was before he started trying to pimp them out with hydraulics or Dremel the Tasmanian Devil on the side.

When I start talking about Tron 2.0, you need to know from the first that I do not pretend indifference to Tron as a concept. So when I say something like Tron defines me as a person, you won't be caught off guard.

Tron defines me as a person.

I was talking to Brendon Sheffield of Insert Credit fame, this would have been a few days after I turned in my article for his project on Gaming Journalism. He told me that the reason Jane's article on the Rez Trance Vibrator was so poignant is because from the moment a young man saw a pixelated breast on his screen, he has longed to have sex with a videogame - and she, like some pioneer into the uncharted expanse, was able to manifest it. I've thought about that statement a lot, but I couldn't figure out why it made me feel the way it did. It seemed profound, but I realize now that it was just alien to me. I have a tendency to think that things I don't understand are profound. The fact of the matter is that with him twenty-two and me twenty-seven, maybe the breasts he saw as a boy were rendered at a higher resolution than the ones I saw. But seriously, sex with a videogame? That's not the fantasy, never has been the fantasy for me. The fantasy is absolute and utter translation into the digital realm. It's pantomimed every time I play a videogame. And that comes from Tron.

So when I play Tron 2.0, and the main character Jet Bradley is digitized to lead a new life in the computer, he no longer has the glasses he wears in the real world. Not a big deal to the game, you know - visual acuity isn't being modeled. But to be translated into physical perfection, that's not a small thing. And when you take into account that Jet is a User, which in Tron theology is synonymous with God, the fact that he has been sent to into this world to save it takes on an undeniably divine connotation. Against this backdrop, what am I going to say - that I like the glow effect? There has to be someplace else you can go to for that.

Tron 2.0 arrived early, so I've had a few days to play it. Its expansion of the Tron concept to incorporate the trappings of computing modernity is impeccable - and I would caution anyone attempting to pec it. The first vista I saw as I entered the Internet made my heart leap, but kicking around on old laptops and mainframes never got old - I was under the impression that they didn't have much to do rendering their environments, as they could be very simple indeed and remain canonical. And, simple they are. But there is craft to them, an understated elegance and beauty, and I can say with firmness that though seeing the Internet was understandably a moving experience it is by no means the only moment of awe I can refer to. I was cautioned by a tester that I was to expect very basic FPS style gameplay, which (as we are all aware) amounts to key hunts and finding exits. I'd also been warned by the existing reviews to be aware that dreaded jumping puzzles lurked at every corner. I can't contradict those things, because you do need to find keys and jump on things. The difference is that I want those keys really bad, because they allow access to upgraded programs I can install directly in my person - and I feel like I'm jumping for an actual reason, for real rewards, and not because some dumb fucker couldn't think of anything better.

I deny outright the notion that playing videogames is inert creatively, the same as doing nothing. I play them to entertain myself - I utilize the settings and scenarios to augment my own creative process, outputting a huge volume of supplementary data for each character, activity, and context. I have found that Tron 2.0 is an excellent tool for this purpose. The end.

rockets headed right at me