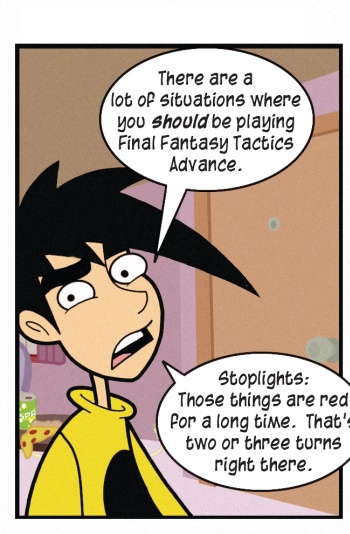 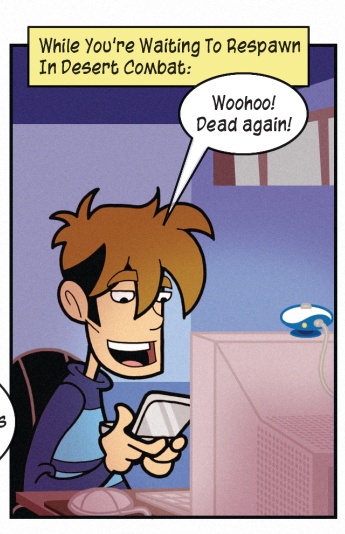 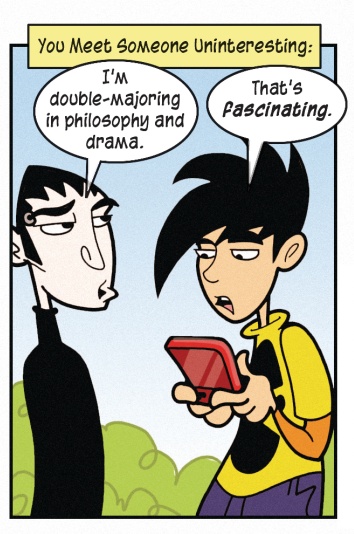 You'll find that the average day is honeycombed with perfectly good moments to invest in Final Fantasy Tactics Advance. At least, that's what we found, and we weren't even looking very hard. Also, you'll note that I mentioned Desert Combat in the strip - let me establish that the version I'm playing is .4, the most recent one, and let me further establish that as of this release I think that this mod has EA on the run. Secret Weapons is real fun, and I don't regret purchasing it - but with a growing stable of fine maps and exquisite vehicles, Desert Combat is quickly becoming the definitive Battlefield 1942 experience.

GameSpot pulled their 5.4 review of Savage, which fascinates me and maybe you - did you hear why? The developer, S2 Games, claims that their servers only register a couple hours of Savage play for the reviewer in question - and in the face of that 5.4 review, they were understandably pissed off. Savage isn't quite like other games, and as my mind wanders through the experiences I've had playing it, it makes it difficult to decry the Gamespot review score with any real force.

I have been discussing other things, so I never had an opportunity to talk about how Savage was received at the last Gaming Day we had. For the record, there wasn't a cross word spoken about the game - and it was played virtually all day. We were lucky enough to have an old hand from the beta there, the wily Nilt, and he got us a dedicated server going that ran great whenever somebody wasn't playing Counter-Strike on it. Savage isn't like other games, as I said earlier - it combines real-time strategy and FPS gameplay in a way that I believe is an acquired taste. A LAN environment is practically a best-case scenario, because the barked orders, commiseration, and silken connection resolve the issues you might have playing it online - where lag might be an issue, where you feel disconnected from your teammates, or where despite very clear directives from your commander in the UI his overall strategy is not apparent. In my experience with the game, the issues you're likely to have are more social than technical. I don't think it impossible that the reviewer played the game for two or three hours - note that this could actually represent only three games of actual playtime - without ever having a round that truly gelled the Savage experience for him. And if he played it for a few hours and determined that there was, in fact, nothing there, I don't fault him for that. S2 Games, they can be as mad as they want to about it - some guy who has barely scratched the surface saying shit like that actually costs them money. But for my part, if their Savage did nothing to keep him, there are undoubtedly many other people for whom the game will hold no pleasure. Though it is difficult for me to imagine that the sight of a behemoth - a towering monster whose chosen weapon is an entire tree - would not produce some lasting emotion in you as you see it lumber toward your base, apparently there are people who do not believe Jennifer Love Hewitt is an angel from heaven. I submit this as proof that anything is possible.

If a review is a pack of lies - you might recall Gabe going line by line on a particularly grievous Lost Kingdoms 2 review - then clearly it is in our best interests to come out swinging. We have a well-earned reputation as ne'er-do-wells, a rowdy roadhouse on the fringe of Gaming Media. But I actually want reviewers to, if you'll excuse the term, savage games they don't enjoy. I also don't need authorization from some fucker in order to like a game, so they can score games any way they want. I do my part here as a sort of advocate for games I think have been mistreated by the larger press. I certainly don't do it because I believe our perspective is the definitive one - I do it because I think that reviewing games as such is better thought of as a conversation than as an unflinching edict from some distant source. I'm simply trying to contribute my part.

The only thing I really don't enjoy about Savage was that in order to repair something or really bash down a building with melee attacks, you have to click rather a lot, over and over, for a very long time. It's tedious. Luckily, Nilt came to the rescue here as well. Bring down the console with the ~ thing, and enter "bind key toggle button1" where "key" is whatever key you want to hold down. See? That wasn't so bad.