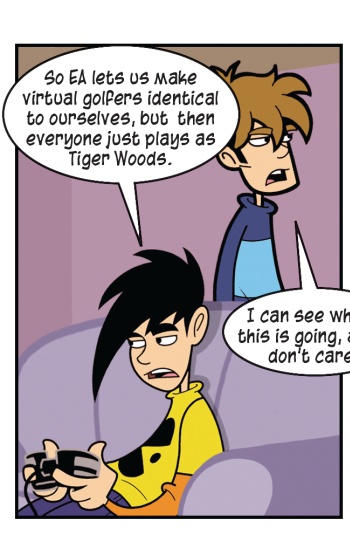 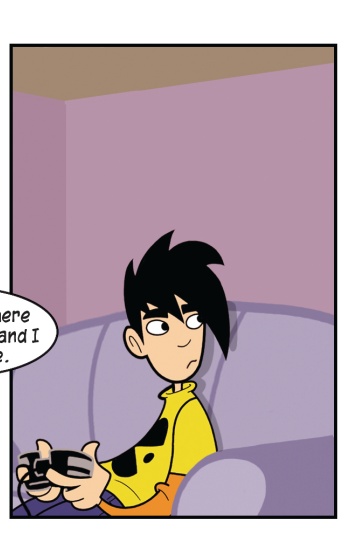 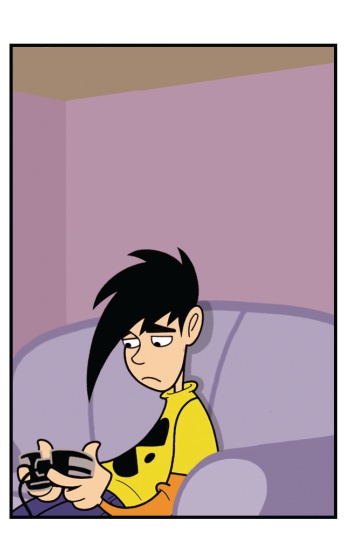 Okay, maybe I do care a little, just not enough to discuss it with Gabe all Goddamn afternoon. As a golf game, Tiger Woods 2004 is very near perfect - as the sequel to Tiger Woods 2003, they were starting from a pretty good point. For new features, we've got Game Face (the facility we describe in the strip) which allows you to create an eerily accurate representation of yourself. Then you can delete that representation and use Tiger Woods or the variant Super Duper Sunday Tiger, which is like an unstoppable golf cyborg. There's also a vastly expanded Pro Shop, where you can procure "Lucky" garb for your character, some of it in sales that change daily. Look out for "Real Time Events," such as eclipses or birthdays, that will offer unique challenges. This is all quite apart from the huge number of courses, which include holes you must maneuver the ball into. As a golf game, it's pretty hard to beat. The only chink in its armor is the online play, and if - as a satisfied fan of the 2003 version - you purchased the game explicitly for its online additions, obviously that's going to stick out.

After a couple more days of play, Gabe likely has some words to put down on the game, so I'll leave him to it. If he is too bored or too enraged with the topic, I'm perfectly capable of paraphrasing his assertions. If he pops up here later, I won't worry about it.

After a couple false starts, I was able to obtain that Clancy preview disc and let me tell you - I feel spritely and full of energy now, bounding like a fawn. The new maps for Island Thunder are (if my research is correct) drawn from the PC Desert Siege expansion, and seem to be held is fairly high regard. I'm trying to figure out if they'd eventually be distributed via Live, because as nice as it is to have them I really do need people to play them with. The Rainbow Six 3 demo was fairly exciting, and I am trying to remember exactly if this demo was the same one I played at E3. I believe it very well may be. Playing it without time constraints or the deafening roar of that psychotic madhouse has been enjoyable, however. Easy access to Thermal and Nightvision modes, coupled with the soft glow that accompanies nearly everything make for pretty easy comparisons to Splinter Cell. The polish on the included level is startling, and if this is representative of the gameplay in general you'll see more Action-Packed Firefights instead of sneaking around by dumpsters. I guess we'll see, I don't really mind tuning the play somewhat for the console, and the combat felt good. It would have been interesting to include a little Live play in the demo, but that's pretty wishful thinking on my part. If I've understood the available information correctly, you can either Push-To-Talk for communication with your teammates, or you can just speak and it will be heard by those in your immediate vicinity. I don't know why that excites me so much. Part of it is, I suppose, the ability to speak directly into the environment. That sounds good to me. But I'm also interested to see if that gets used in gameplay at all, overhearing people, sneaking up on them and introducing yourself, things of that nature.

My friend MG from down Singapore way let me know that the game Shattered Galaxy - a sort or massively multiplayer RTS - is now free to play, with a few restrictions. In any case, even keeping those in mind, you really can't beat the price - and I enjoyed my time with the game immensely.

the world it creates is black and white