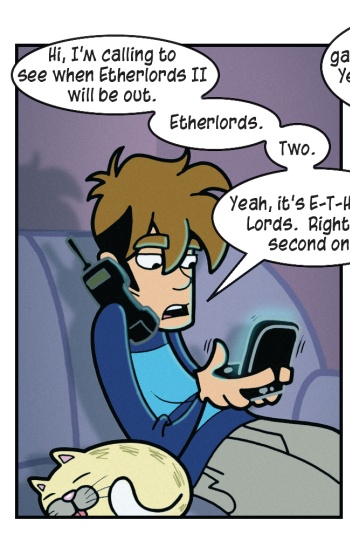 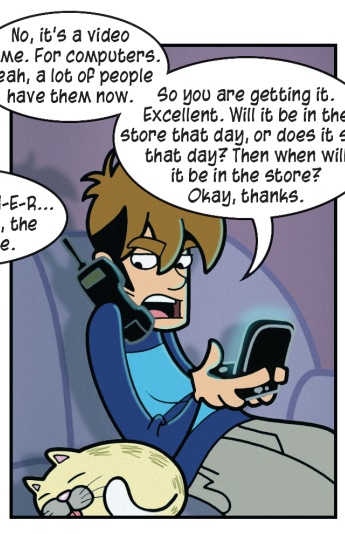 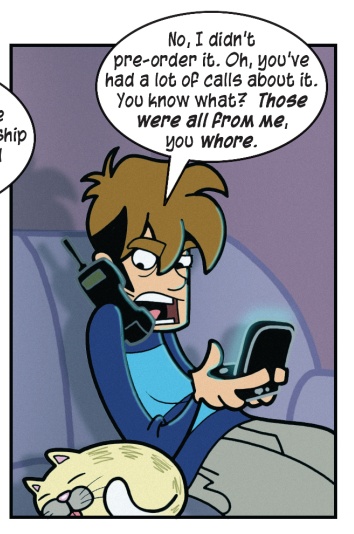 I may have been rude. The only thing that will improve my mood, though, is Etherlords II, so as far as retail employees are concerned it's kind of a Catch-22.

Gabe only just spoke about Links, comparing it with great virulence to Tiger Woods 2004. Even I was surprised at the vigor of his critique, because I've seen a great deal of the new Tiger and have come to the conclusion that it is a game of extraordinary polish, rich with features. But I understand what he means, now - things like Real-Time events which take place during an Eclipse or lucky shirts in the Pro Shop are interesting additions, but they do not have anything to do with Golfing. A DMX track does not correlate to Golfing. These extra features are for people who don't have a lot of interest in Golf as an actual sport, and amount to tricks designed to ensnare the mainstream player, i.e., me. I thought it was an interesting perspective.

We saw other games there, and I'll talk about those in more detail today and Friday. You can read about Amped 2 someplace else, though. It was alright, I didn't throw up on the guy who was showing it to us or anything but it didn't interest me enough to drone on at length about it.

Top Spin, however, is a game I could stand to drone on about. Virtua Tennis, we've all heard of it. If a man came up to me on the street, as sometimes happens, and said "Virtua Tennis is the finest sports game ever made," I'd be likely to agree with him. I'd also wonder why he said that, but whatever - maybe he started playing it again. For people somewhat outside the continuum of Sports Titles in general, people who approach the genre a bit mystified about the rules of the various sports, VT is just about Goddamn perfect - in essence, a highly competitive action game with stunningly elegant control and great visuals. The people who made Top Spin have played a lot of Virtua Tennis. A lot. Except they added a character customization engine that equals anything EA's Game Face can produce, included literally a fuck-ton of courts, and then threw in four-player online modes.

Blah blah career mode, blah blah blah different countries blah public courts blah blah fascism. Take it online, though, and just as in MechAssault a friend at your house can join as a guest and you can go head to head with another team online. Of course, because Top Spin is a part of this XSN Sports thing, you'll have leagues, tournaments, and other things that Microsoft hopes you will be interested in. After each point, there's buttons you can hit on the controller to determine your reaction to it - obviously, they're skippable. I don't know how many times you'd want to watch your online foe caper around the court, swinging his racket like Excalibur, but I'm certain it's a number less than one. In any case, in your mind just think about fluid VT controls, with a host of shot additions - there's four shot styles on the face, words like "lob" and "slice" that mean nothing to me, and two "skill shots" on the triggers that require a bit of finesse to operate. Those I understand, because they're far more pyrotechnic than the others. For example, the right trigger is an overhand shot which attempts to lodge the ball in your opponent's urethra. If you know anything about urethras, you know this is a very difficult shot to master - as soon as you grab the trigger, you'll see a gauge open with a line that travels top to bottom in rapid succession. Release it on the sweet-spot in the middle, and you're rewarded with a perfect shot. The left trigger does what's called a Drop Shot, a definition of which can be found here, but it requires a similar timed shot to make it work right. Taking risks on shots like that will eventually place you securely In The Zone, which is like being on fire with preternatural tennis ability. It engorges that sweet-spot I mentioned earlier, making it larger and more sensitive.

I'll talk about Project Gotham Racing 2 a bit on Friday. I thought I'd be able to fit that in today, but there's just a lot of information to convey, and since I actually liked it a lot I'll probably take up too much time discussing it.

When we added advertising to the site after being completely reader supported for over a year, it had been our intention to collapse the Donation System altogether. It didn't seem right to run with both systems concurrently, and if we were going to do it, it seemed like we should do it all the way. You can imagine my surprise when our suggestion that we close that down was met with resistance. "Please don't give us money!" is usually a positive development. Of course, at the time we were pilloried for it - using both systems - but contributing to the site had apparently become very important to many people, it was a way to actively ensure that the site remained operational. I'm not making that up. They remembered when the site had gone away and might never have come back if it weren't for them. These days, we just aren't in that kind of danger. It's not that I don't like money, indeed, my avarice is comparable to that of a Rap Star. But we can't in good conscience keep the Donations System up and running. Essentially, it worked! The Internet was broken as a means of sustainable creative distribution, and you fixed it. I sometimes read this or that exhausting essay on Micropayments, and how they died on the cross to cleanse us of sin, or some other pleasing tale. The hard facts of the matter are thus: the readers of this site, without the assistance of futuristic technologies, made it happen. They didn't wait. They fixed it right now, in place.

We'll finish out this last story, though - the CTS one - I'll just keep appending the files to the archive, and we'll let you know when we add things to it. Just talk to me if you've donated before and want access to the comic.

sanity is a full-time job