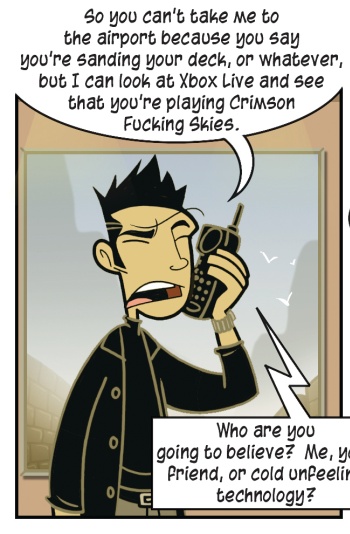 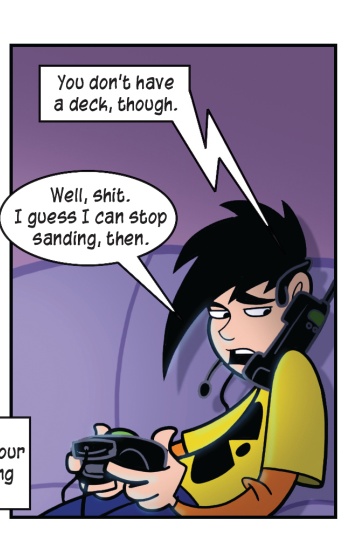 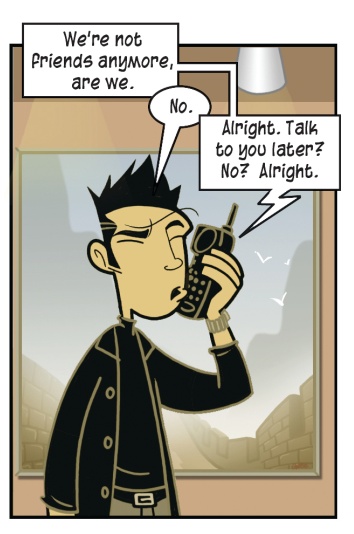 You can see our friend Robert there in today's strip, at least, I think he's still our friend. Of course, you also see Gabe. But when is that anything to celebrate?

I had just come back from American Splendor, a movie I recommend to every writer but also to every reader, essentially every literate person. I felt like I had lived an entire life during my time in the theater, it was like that episode of TNG. At any rate.

When I got home, I had six or seven calls from Gabe, even going up to eleven o'clock. He's a night owl, but he has very strict rules he observes about calling people then - essentially, the rules say he can't. Maybe he had contracted some kind of disease, I thought. I can watch him waste away.

It turns out that he just wanted to play Crimson Skies, quite a lot I guess, call me six times at eleven o'clock a lot. And after playing it for a while, I can understand why. I had meant to try it online during the day yesterday, but after jumping into the Single Player mode and expecting it to be sort of corollary, inoffensive, polite but unnecessary, I ended up playing it for hours. It's probably for the best, as I was able to come into multi not completely unaware of Airplane stuff. The controls are a marvel of modern ergonomics, every button useful and nothing duplicated. Combinations of analog stick movements allow wild, Blue Angels shit - graceful maneuvers designed to avoid harm or just be fancy. To say that it is MechAssault with airplanes oversimplifies the game and doesn't give it enough credit, but that's certainly a good place to start. You do battle with other people online, sixteen instead of MechAssault's eight, in a variety of deadly equipment. They diverge immediately, though, with great gametypes like "Keep Away" or "Flag Heist" that only hint at what the future will reveal. Like MechAssault, you can expect more planes, maps, and gametypes for months - but these initial offerings are ample in their own right.

I've seen the game twice before this, three times I guess, two at E3 and once over at FASA itself. Every time I saw it, it had improved incrementally - but the final release version is polished so far beyond earlier versions that it's inexplicable. Try capturing a flag through twisty passages in the Lost City or cruising through canyons on Arixo after the desirable chicken in Wild Chicken mode. There are simply no valid complaints to make about the way the game looks. Sailing lazily over the shell of a once active volcano, the moon reflecting off the water as four bastards came in for the flag is an experience I can't overstate.

This game has something of a storied past, nearly cancelled, wasn't meant to have online play, changed designers, there was apparently even a Mummy loose in the office at one point. What I've got here at my house is refined, doesn't cut corners, and delivers on the promise of swashbuckling Air Piracy. It has an entertaining, beautiful single player experience and multiplayer that is accessible and feature rich. What I've written here sounds like hyperbole, but every person who has played it knows exactly what I mean.

i can't get my normal mail