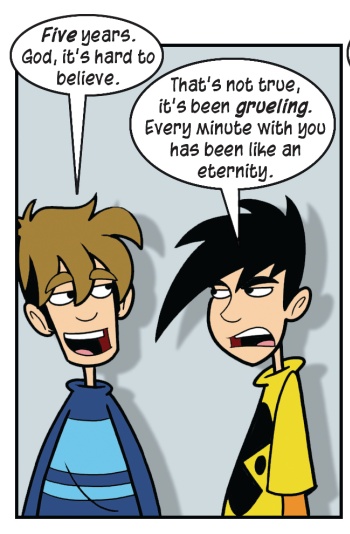 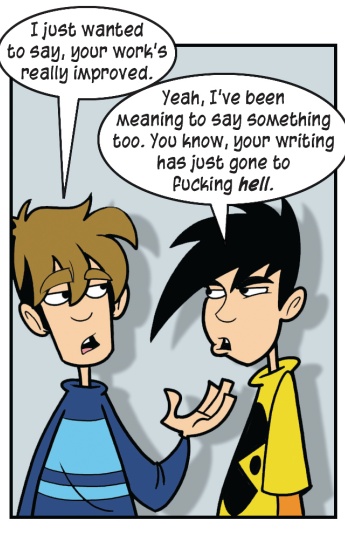 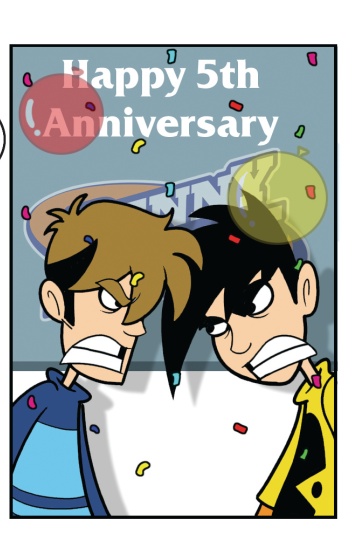 Penny Arcade's other purpose is to measure time for us, like a metronome - commemorating the site's fifth year will serve any person on a romp through the archive as well. I'm sorry to keep harping on it, but it just seems so impossible.

I think I've reached some sort of equilibrium, game-wise, but any retail release could threaten it:

Project Gotham Racing 2 is something I can just get into and get out of. The game certainly has multiplayer racing modes, but I haven't even gotten there yet - I can get last place at home, and nobody sees it. The thing about it is that even when you're just racing solo, everything you do is correlated to some larger purpose online. Every time I finish a track, it's uploading my score to the server, and at any point while I'm racing I can get an invite to this or any other game. If I want to see how the best driver in the world does a track, I can just grab his ghost from the server and see that he drafts the other car about seventy percent of the time.

Links 2004 gets played at night, with a rotating firmament of golf stars - Kitsucoon, Geshtu, Tepid, Vandelay, Longman, and Sir Greybeard. If you want to get in a round, we're up playing the great team-based modes at 10pm or so PST. We'd love to have you, and you're probably suffering just like we are - waiting at that join screen for someone to pop in. I'll set up a tournament once I finish my post, hopefully that will bring a few of you out as well.

I'm also playing Uru whenever I can. I'll wait for a couple more patches before I invest myself too heavily in the multiplayer portion, which as I've said before has promise but in practice makes absolutely no sense. I have heard it described as a multiplayer chatroom, and that is certainly part of the experience, but the main draw of the online element is the stream of new puzzle ages as well as alterations to old ones. I renewed my focus on the single player mode and held off the multi when I entered a world of absolute lavender. No nothing, no weird switches or mushrooms or dark murmurs, just purple, deep and wide. I have a very high opinion of their artistry, and I am willing to trust them a great deal, but I'm fairly certain that was a bug.

The game I'm playing virtually any other time, like when a level in Uru loads let's say, which takes like a fucking day, is Mario & Luigi: Superstar Saga. This space might originally have seen a sort of verbal funeral for Nintendo, a benediction, recounting the good times but bearing a stern appraisal. I'm starting to wonder if the Cube just isn't where it's at for them, if they don't just like their little clamshell better. I know I do. The only time my Cube gets any use is when I'm using my Game Boy Player or when I need to set down my drink.

Mario & Luigi, though - look at those reviews, the entire world is united in song. Super Mario RPG and Paper Mario showed just how well the conventions of these erstwhile plumbers mesh with a role-playing cosmology, and their showing on the GBA is simply... I think "pure" is the word I would use. It is actually very exciting to, in the trappings of an RPG, bop a goomba. The attacks have timing elements, and defending yourself also has a sort of arcade, reaction-time element, and since you control both Mario and Luigi simultaneously these battles can manifest some fairly tricky platform elements. I take it with me everywhere.

I'd never even heard of "Fry's" until that MC Frontalot track, but apparently they have one dangerously close to me now so I'm going to see what the big deal is. I say dangerously because they are apparently magic cities, like Oz, stocked high with wonders.

live half my life and throw the rest away