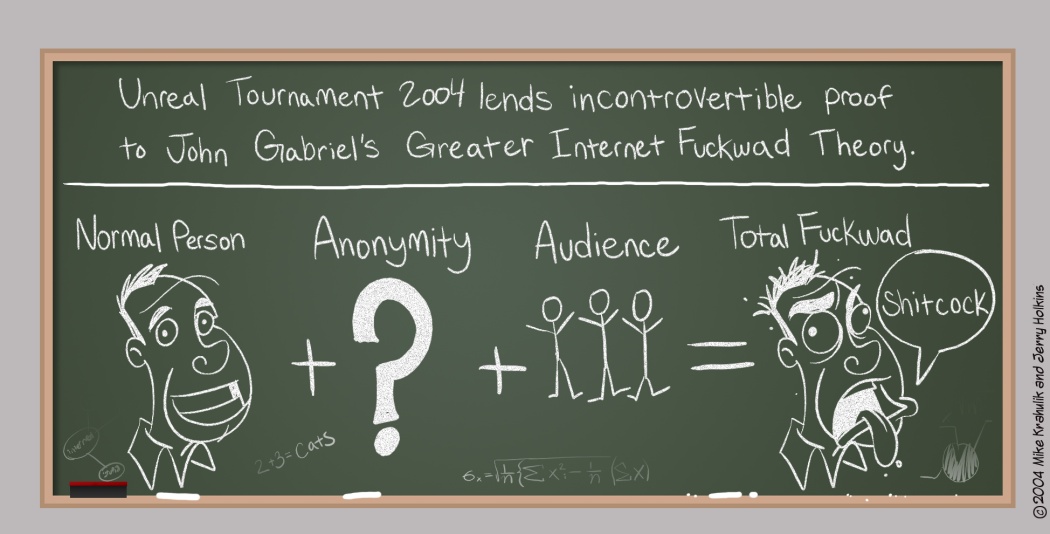 I'll go into it with much more specificity at a later date - maybe Monday - but Unreal Tournament 2004 is a great game and an almost ridiculous value. It's only flaw isn't in code - it's in the human beings that feel like they have a license to say whatever they want because they bought the copy that includes a headset.

No, today we're going to talk about Pandora Tomorrow. I'm not supposed to talk about the single player portion, I guess. All that does is make me want to, but I'm polite and I signed something. I will say that it makes the original Splinter Cell look like a dry run.

You might be curious to know how playing the new Pandora Tomorrow multi is like petting a cat. Well, I'll tell you. It is fun to pet cats, and cats certainly enjoy it, but mostly when you pet a cat you're doing it for yourself. More than any other game I've played, and perhaps because of the very different roles involved, playing your best actually elevates the quality of the experience for your opponent. You are almost working together, and in a strange way even collaborating on each round.

It isn't like the raw competition you see in other online games - you can't compare it to CTF let's say, because each side in Pandora Tomorrow has such divergent goals and abilities. What's more, getting your ass kicked over and over in CTF isn't enjoyable. You each have the same equipment, so when they win it's like they're hitting you over the head with it. When your opponent wins in this game, it's because they embodied that side's unique traits better than you did. The trick is that if you are playing as the Shadownet spies and your Argus mercenary opponents are constantly running around with their headlamps on, planting proximity mines, setting Spy Traps, and maybe catching you with a phosphorescent grenade so that you leave glowing footprints, they are refining the properties of your spy experience considerably. Simply by playing the game the best they can, the nastiest, they are dramatically improving the feeling of high-stakes espionage. The same is true when you play Argus. If spies are sneaking around the way they should be, deactivating sensors and cameras with their pistol, tracking you around the facility with Spy Bullets, disorienting you with flashbangs or (God forbid) actually grabbing you from behind and whispering sweet nothings, they are making it a better game.

As the Spy, you want to feel like you are in a dangerous game where one false move will lay you low. As the mercenary, you want competent prey that will test the strength of your defenses. And you never feel more like your side when you're hiding behind a van in a parkade as the headlamp swings by you, or when you take one more look out the window and see your Shadownet opponent hanging from one hand from a ledge outside, pistol pointed into the room in an orchestrated moment of Woovian bliss.

Like any other person who considers themselves hard-core, I initially found the four player limit the game imposes to be somewhat antique and unimaginative. I can remember playing on servers for the original Tribes almost five years ago that supported a hundred and twenty-eight players - four is undeniably less. It's only because I've played on the order of thirty rounds or so that I have a sense of what they they're getting at. I've actually had friendly fire kills on the Mercenary side because the tension was so great that I shot at anything that moved on Motion Tracking mode.

(Wait a second - have I talked about the Mercenary vision modes? Let's get that out of the way. Spies have the modes you associate with Splinter Cell already - night vision, and thermal. Thermal is extremely useful in this game, as many levels have been created with its use in mind - Shadownets up above the ceiling looking down at mercenaries and tracking their movements as they go room to room. Mercs aren't without their own tricks, though - hitting left on the d-pad activates Motion Tracking, which casts the entire screen in red - except for objects moving at a certain rate of speed. In this way, you can observe an entire courtyard and immediately pick out the Spy if they should be foolish enough to make a break for it. The reason I made a point of mentioning "a certain rate of speed" is that even if you are in motion tracking, a determined spy can sneak right up to you - right in front of your face - and remain invisible in that mode. Or, another example. I was deactivating a machine, I can't say what kind, but I was deactivating it good and proper. A Mercenary walked right up by me and then proceeded to sort of hang out. I wasn't sure if we were friends now, if he was just shy, I had no idea. It turns out that the motion of deactivating it was so slight that it did not register on his visor. He got wise just before I completed it though, and when I saw the headlamp come on I braced for the three round burst.

The other advanced vision mode, Electromagnetic, casts everything in a light blue haze except for those items which produce electromagnetic fields. So, televisions, pop machines, light fixtures, and even spies using their visors are plainly visible - in some cases, even through walls. Remember the spy I mentioned, the one looking down through the ceiling on thermal? I see him too, in this mode. Spies can always "go dark" and shut down vision modes to avoid this, but they often need those modes to get around in the places they sneak through. Mercs also get the headlamp I mentioned, in addition to a kind of laser rangefinder that can be swept through dark areas to find prey. Okay, segue over.)

As I was saying, we were so flipped out by the combination of the huge, dark Subway section and the sounds of whistling wind and creaking iron that we actually shot each other in fear. If everywhere you looked there was a spy, the proceedings would immediately devolve into a sort of high-tech bop-a-mole. It needs to be important when you see the opposition, and in order for it to be important it can't be ubiquitous. What's more, since it's four people tops, there should be tons of games out there - you might never have to play it with strangers if you don't want to.

there's a desert in my mouth