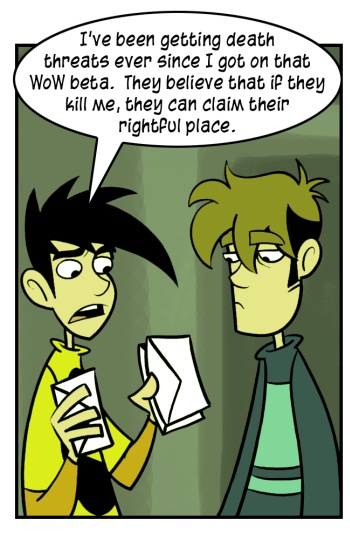 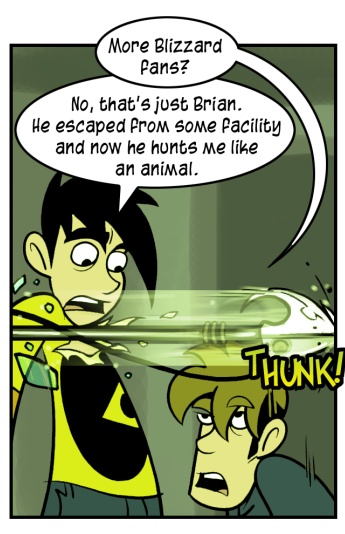 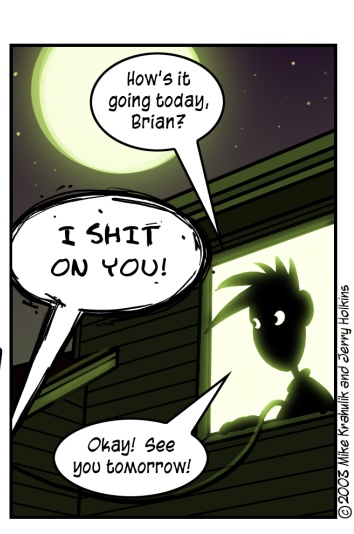 I'm punch-drunk, stupid, and stumbling from a succession of punishing blows, strikes administered with precision by a weekend solid with electronic amusements. It's true that our incorporation into the World of Warcraft beta - which we've now learned will likely gestate beyond the five month period - has created new tensions inside our Inbox. The usual dark themes make an appearance: our deep collusion with Blizzard, the result of having been anointed with evil oils of nebulous manufacture, has done this or that and now we are incapable of providing genuine coverage of the game. I suppose that given the opportunity, they would turn down a beta spot based on some heretofore unuttered moral code. What I should do at any given moment has always been shrouded is mystery, I do so enjoy these communiques from ethical paragons.

There is a corollary to what Scott Kurtz calls in his strip "DVD Adultery" that pertains specifically to the nexus created by your special lady and videogames, and it is one that I must contend with second hand. Outside of a brief but torrid dalliance with The Sims, my own wife has little use or affection for the passtime this site is dedicated to. On the other hand, Kara is actually a rather stalwart acolyte of our order, her Night Elf priestess frequently dropping the boom on fools. But with her visit home last week - on a sort of tour to promote her production of a human life - word came down that Gabe was not to play his character during her absence. She didn't want to be relegated to sidekick status level-wise, which is something I understand. However, utilizing a loophole in the edict, Gabe decided to switch characters while she was gone and actually found a class he was better suited to.

Humans were curious about how combat works in WoW, but I'm afraid that there are no grand revelations to make regarding that facet of the game. As is expected in the genre, you select an opponent and then attacks occur at regular intervals. There's a duration between attacks that is clearly labeled on the weapon - my oak mallet for example, a fairly ponderous device, clocks in at 3.5 seconds. I don't hit as often as someone using most swords, but the odds are good that when I hit you with this thing you will remember it. There are also abilities which occur instantly, i.e., outside of the normal attack continuum. In this way, you can react to situations in real time - for example, using them to cancel an enemy caster's spell.

In addition to this, there are obviously many class specific abilities you may learn and upgrade as you progress through levels. Something I thought was interesting about Warriors was their "stances," explicit modes of combat with their own unique skills. If you'll be handling the tank role, for example, switching to a defensive posture will increase your defense - that much is probably clear - and also offer a suite of abilities which reflect that role. For example, a shield bash technique which interrupts casting or a mode that increases your chance to block a single hit for five or so seconds. The Battle Stance is also full of tricks, tricks which can snip your tendons like Hamstring or deal damage over time like Rend. If you're curious about other techniques, by all means read the list they have on the site. Each stance actually has its own toolbar at the bottom of the screen, which helps keep your abilities of each type straight. This is the class Gabe was working before, and he dispensed some genuine harm in that role.

What made him begin consorting with demons isn't exactly clear, but for his new class he chose Warlock. It's what is often called a "Pet" class, one whose summoned or constructed creatures are a main focus. When he summons a demon, and it's made clear that the Imp he draws to him does not enjoy it, the creature sticks around and does your bidding. After gaining ten levels, Gabe was able to take a quest from a master warlock in exchange for the ability to summon a Voidwalker - a sort of djinni made of blue shadow which sports golden armbands. Each of these pets has advantages and disadvantages, the Imp is a caster and the Voidwalker is more of a bodyguard, but you understand the idea. Each of these summoned creatures gets their own toolbar above your own to make manipulating them a simple procedure. Gabe enjoys playing a strategic role with these pets more than he enjoyed standing in front of Kara and getting punched in the face, so I'm assuming that the punched in the face role now falls to me. Looking forward to some of that.

I also snapped a couple shots you might enjoy, who knows. I found Lakeshire to be quite a sight from the bridge over Lake Everstill, and thought you might share the sentiment - then, this morning, I grabbed another shot from a different time of day that I thought might help place the other one in context.

now that the war is through with me