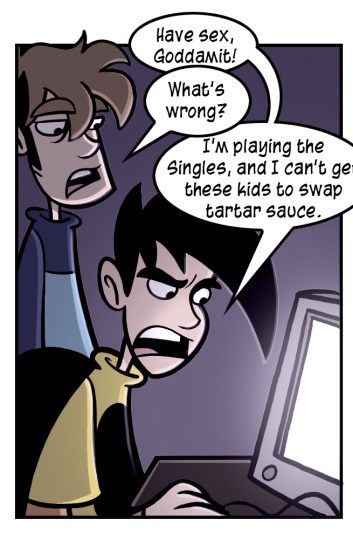 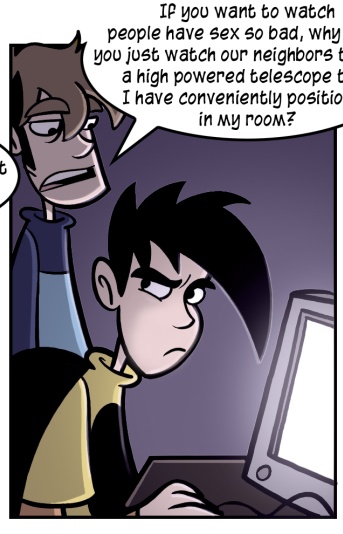 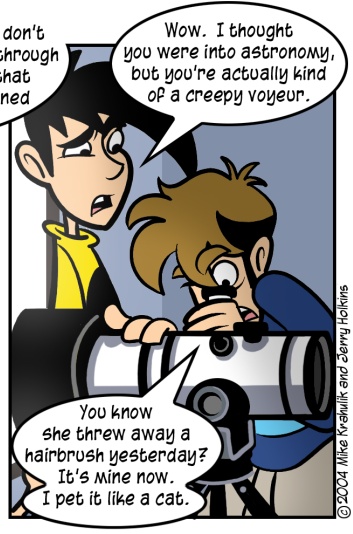 In his review of The Singles, the sensual Greg Kasavin takes great pains to remind us that the game is from Europe - and he's right. It is. When I was in Italy for a short while, you could see things in ordinary commercials which contained scenes I'd have to be 18 to see here. People would have sex for twenty seconds, and then it would show what I imagine is some kind of abrasive cleanser. These days, I'm something of a connoisseur where erotica is concerned, and like all gourmets my fetish requires custom equipment.

People often ask me via e-mail which console they should purchase, and it's not that difficult to create a basic framework from which to determine this. There are various breakdowns by genre, places where the consoles overlap, but if anywhere in my exhaustive interview you refer to a PC heritage or a desire to play games online, that's like the page in the Choose Your Own Adventure book where you turn right to the end. You need an Xbox.

I said something along these lines when Live first hit last November, and as is always the case when I make definitive statements which accurately reflect reality but do not take care to massage people's individual biases, I must contend with some self-appointed "balance" arbitrator who claims that whatever I said is not true and that all consoles are equal in some fundamental way. While it can be said that there are things to recommend each machine, these devices are absolutely not equivalents, and it is pure fiction to maintain that they are. Try to play a game from Square Enix on the Xbox or get your Nintendo games anywhere but the Cube. These aren't bizarre accidents of fate that will, like an eclipse, pass to reveal some orderly distribution of these things. They are manifestations of tactical moves on the part of each of these companies. Online was the only thing that Microsoft could accomplish to a greater degree than any of their competitors, and they have spent more money than you or I will ever see in our lifetimes insuring that their solution for networked play is the jewel of this console generation. If you don't believe me, just go send a friend a voice message when you add him to your list on the Playstation 2. Oh, that's right - no universal list, no voice messages, no built-in panel for the management of contacts. I forgot. How about sending him a request to play a game while he is playing any other game on the service, let them pop the disc out, put in the other one and automatically join your shit on the Cube? Oh right! Online play on the cube, save for one or two titles, doesn't exist. There's no service framework, and no service framework will ever materialize for the system. The Xbox has its own things to answer for when it comes to the support of Japanese developers, who hold the keys to the console kingdom. But where online is concerned, you literally cannot fuck with these.

We busted the machine's balls initially, and rightfully so - the size of controllers notwithstanding, their launch was not really something to be proud of. That's not to say that there was not value to be found, but it was less like a bag of Skittles in terms of uniform flavor and more like the single packet of heroin in a drug courier's stool. They wanted to give the impression that they were big boys too, and could sit at the big person's table. This year, they earned that spot. Just like the Nintendo booth, it's going to take a couple days to get all the way through it so bear with me. Some of the games I'm most excited about, like Full Spectrum Warrior, Full Spectrum Warrior, and Full Spectrum Motherfucking Warrior will be out before I finish our trip through their booth. Thief 3 already hit, and has thus far seen reviews that would garner the highest Warner Brothers royalty calculation. I'll be catching up on some mail today, but I'll be putting up stuff throughout the afternoon, just like Wednesday's inexplicable info deluge.

he focused it to sharpness