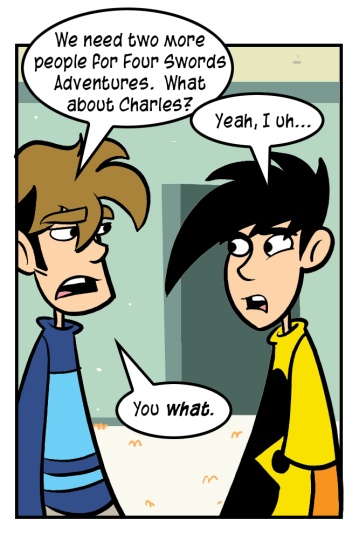 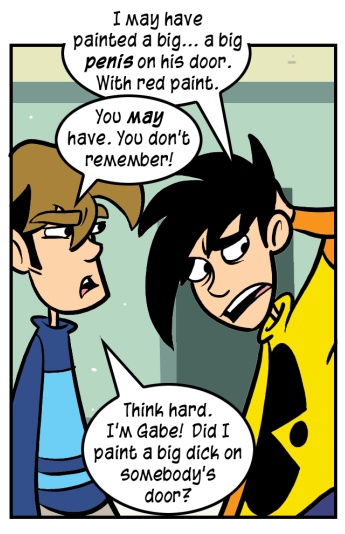 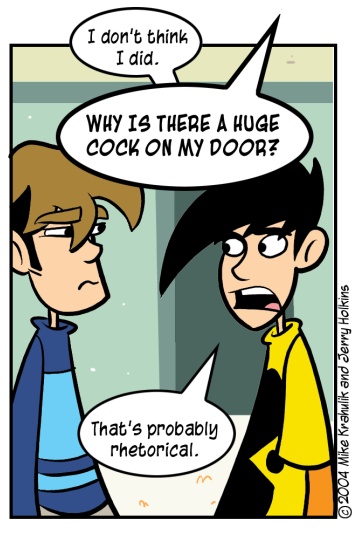 We have finally assembled our All Star Team for Legend Of Zelda: Four Swords Adventures, and like the Planeteers our membership spans the globe. We did run into a snag initially, but it's not really something I want to talk about.

Many people attend E3 by proxy through me, as I will go and look at specific things for them and then report back. Quite a number of readers were curious about Dawn of War, Relic's RTS based on the Warhammer 40k universe, and when I did not put it front and center they feared the worst, some even going to so far as to suggest that I had been corrupted by the forces of Chaos. Just to get it out of the way, fear is the last emotion you should maintain regarding the progress on Dawn of War. The reason I haven't gotten to it was that I spent several days in the post walking through the Nintendo booth, as I had grown somewhat angry that their offerings this year were being dismissed as inconsequential. Of course, then the Xbox fans took me to task for focusing on their sworn enemy, so I had to redistribute the affection. And, right on cue, the Sony Army made their will known on the subject shortly thereafter. I'm going to reclaim my front page now and cover topics which are of interest to me personally. I feel confident that you will be able to find information regarding upcoming releases for the dominant console in the market elsewhere. Here, we're talking about Dawn of War.

I was not sold on the game initially. Like many other unreformed dorks, what I refer to in my internal nomenclature as Mark Ones, the fact that people keep taking Games Workshop franchises and making them Real Time when there is already a perfectly viable, world famous turn-based system causes me to howl with rage. For me, the thing that brought me over initially was how much their entire execution says about their respect for Warhammer. From the little grots sleeping on their watch atop the ramparts of an Ork stronghold to the Squad of Space Marines praying to the Resource Points, the balls of random junk the Orks fly in from offworld to build their structures to the inclusion of the absolutely critical Morale system, this is anything but a license cash in. They didn't have to let us customize our own Chapters of Space Marines or any other side, creating our own banner graphics for the model carrying the Standard and generating wholly unique color schemes.

The other reason I did not reserve a place in my heart for the game was the screenshots really didn't do anything for me. It wasn't that they were terrible, they looked pretty much like the figurines. But when your models are on the table, it's easy to imagine the battles that are taking place - and they're not static or staid. Yes, it's turn based when you play it on the tabletop, but I have always had the sense that they were about to move, that when I turned my head the Emperor's will was being done back there. Please let me emphasize to you that screenshots are possibly the worst way to experience this game. Dawn of War has the most dynamic combat of any RTS I've ever seen. It isn't just the "blowback," imagined so well in Lord of The Rings, where with a single swipe from a unit of great size or power can send infantry flying. Massive demons with axes can snatch up an Eldar, pop him up in the air, and bring his axe across the limp body like a Louisville Slugger. I saw too many examples of this to name - units grabbing other units and going through almost revolting custom kills, smaller units that enact nearly ten second custom attack animations against larger foes, to look at the battlefield in Dawn of War is to see hundreds of units with considerable size variations, with many completely custom interactions. A few units on each side going "pew, pew" with their far future ordnance would have been enough, but they're trying to do it right.

Speaking mechanically, the reason interactions like these can work is that you do not create individual units and then group them. Space Marines were the example they showed us, so that's the same I'll use here: a Squad can be created at a barracks or delivered from orbit in a Drop Pod, but it is actually multiple units - five, if memory serves. They move and fight as a single entity, and the game keeps track of it, so when these special attacks I was talking about come into play the game doesn't make a big deal of it - the Squad just loses a model. What's more, now that you have your squad there, you "create" units to the squad - want a Heavy Bolter in there? Each Squad has it's own build buttons down at the bottom, new guys can be produced on the fly, and when they're ready they appear with their brothers. There are no resources, at least, not ones you gather in the classic sense - points around the map are captured and produce a stream of points for you to do with as you will.

RTS is not my genre of choice, but they have proven that the spirit of Warhammer 40k can survive the transition. Keep an eye on the official site, Relic News, or DOW Planet if what I've said caught your attention. It's hard not to be excited about it once you've seen it in motion.

that's how to ration the poor