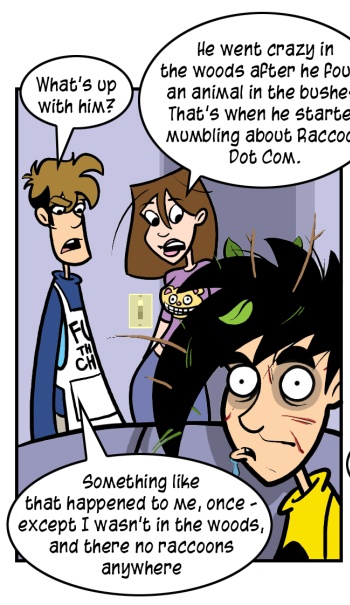 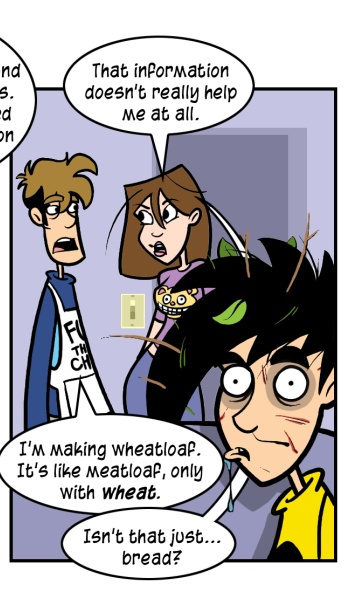 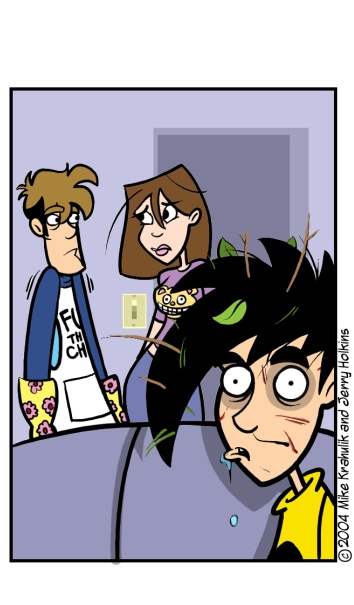 Gabriel has returned - haunted and harrowed by woodland beasts to be sure, but otherwise ready to accomplish our noble endeavor. There's also an odd, stunted conversation between myself and Kara, so there really is something for everyone.

I never went into Scott's syndication panel very deeply here on the site, though Gabe touched on it a bit, but something kind of interesting happened there not related to our poor behavior that should probably see the light of day: Scott plans to offer PvP to newspapers directly, free of charge. Personally, I think that is pretty crafty - but that's not to say it's like twisting off the cap and getting an Instant Win. Now he has to work and work and work, something we here at Penny Arcade deplore. I mean, shit, papers are welcome to Penny Arcade too, if they want it. I think the one where the obsolete home appliance calls his roommates fairies really has a universal resonance. The reason I'm bringing all this up though is that the response to Scott's caper by some syndicated cartoonists is hyper-revealing.

You really do have to go check this thread about it - with the understanding that you are entering a beautiful, untouched, federally protected Ignorance Reserve and should tread lightly. It is for exactly this reason that I detest forums of all kinds. They bring human nature into such stark relief that it can be difficult to bear.

Usually I have to say something ridiculous and then attribute it to another person, but in this case no such prestidigitation is required. You're here, this morning, with me - you know that not only are there many, many webcomics, between one and ten for every discrete human endeavor, there are also as many as twenty cartoonists making a living from their wholly owned creative output on the web. The clear inference one can make is that there are now multiple routes to cartooning "success" - books and long-form stories, syndication in alternative weeklies and newspapers, or a new category - webcomics. Freely distributed or as part of a premium bundling system like PVComics, it has advantages and disadvantages just like the other mediums. Currently, one of things that can be tough about it is that you need to invent your own system to support yourself if you want to make it a full time thing. It's tough, but it isn't insurmountable - I see webcomics that haven't been online for a week with a full range of Cafe Press merchandise and a Paypal donation button. Four years ago, those things would have been anathema to our medium. We grew up fast.

It seems odd to think that a person who is interested in comics as a medium wouldn't be aware of this surging force, hadn't heeded the words of the Prophet McCloud (pbuh). You can see those people in that thread if you like, really take it in. Now, as in any human population, intellect rides a gradient and there's certainly a distribution on display. Some of those people I would be proud to call mentors. Some claim not to be threatened by Scott's plan when they plainly are, some claim to be aware of the development of webcomics as a medium when they plainly aren't. If you claim, for example, that the best strips in the US are all syndicated, you lose - and if I see you, I will kick your walker and you will fall down the stairs.

Some people just say the same thing over and over again - how will Scott make money giving away his strip for free? How will he do it? They await his failure with delectation. I have news for those people, these lampreys fucking latched on to the ground down bones of an old order: Scott Kurtz is already a success. Idiots. He has a monthly book through Image, and characters millions of people love. He can't fail. All he can do is remain Awesome. I know you're looking forward to seeing another young buck go down. You go ahead, you ride your fucking corpse to the bottom of the sea. You can say hi to all the other outmoded exiles from modern life.

it's a god damn shame