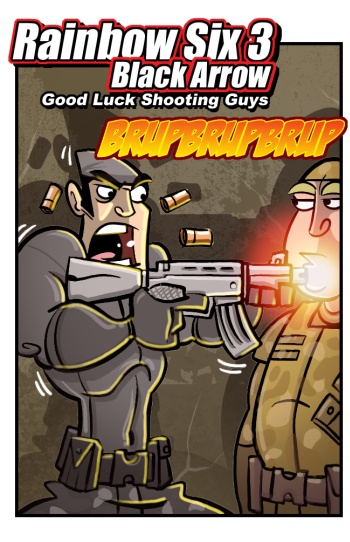 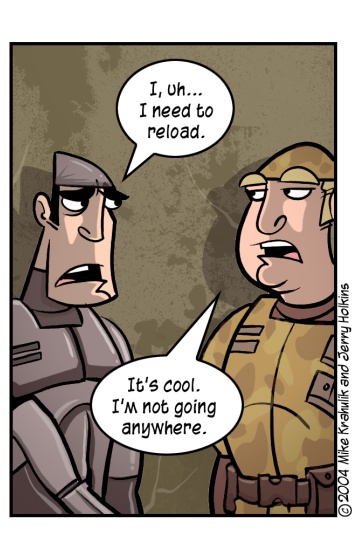 One day we will learn the trick of making our bullets intersect with enemy models - at least, that's the hope - as apparently emptying a submchinegun at point-blank range is not up to the task. In the meantime, we can ponder Rainbow Six 3: Black Arrow's deep mysteries.

For example, why does it look so mediocre? This is the most powerful hardware on the market, and it feels like the system is actually choking on the game. I'm not expecting it to look like the PC version, which is my primary experience with the series - I'm expecting it to conform a bit more to the visual pedigree Xbox gamers have come to know, and the prowess its contemporaries have shown. Since it is essentially a full-priced mission pack, it had been my hope that they had (perhaps via a mysterious ritual!) discerned some new technique for getting the most out of the technology. I don't really see any evidence of that. Every now and then they tease you with Splinter Cell-esque fidelity, and they flip right back to their usual pragmatism. In anything but broad daylight, the muddy green texture and the muddy tan texture used to distinguish the teams don't have a lot of utility. When your tough military guy texture looks exactly like a naked man smeared with guacamole, it's time to think hard about where you might have gone wrong.

Of course, at least part of the blame for any lag must go to Live, for making players host listen servers on their vile consumer level connections. Beyond that, the game can still run a bit rough, even when you take this into account and keep the games down to an eight player maximum. Eight players is about where I like it, actually - that's not even the issue. They know what they're getting into, putting a game in the Live environment - if they've made any special effort to accommodate it, then you fooled me.

They introduce a great new gametype in Black Arrow, a couple actually, but our current favorite is Retrieval - it's similar to One Flag CTF, each team must grab a cannister that spawns and then drop it in their own bin. The only trouble is that the Goddamn cannister spawns underground once every few games, below the earth, turning the cool goal-oriented game mode they just made up into instant Deathmatch. This happens whenever you play Retrieval for any length of time. I think it's fair to ask why.

That it manages to be fun despite these things is beyond me. These issues, arrayed like an obstacle course, obscuring amusement, have the effect of amplifying each personal success. When you do hit somebody, perhaps because it doesn't happen a lot, you start to believe unrealistic things about yourself - you might imagine, for example, that you could fuck a hole in a tank. And it's nice to see the Live 3.0 stuff in there, creating Clans (they call them "Squads") that persist on the service. What I don't understand is having a sure thing, and then not executing it.

you've got to love everybody