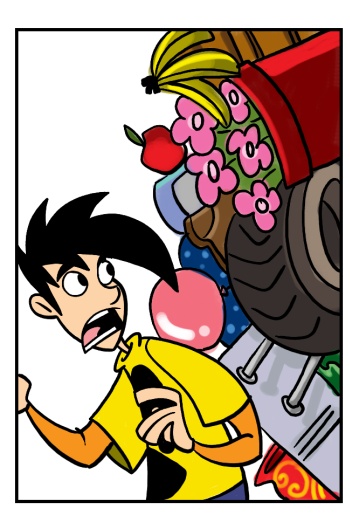 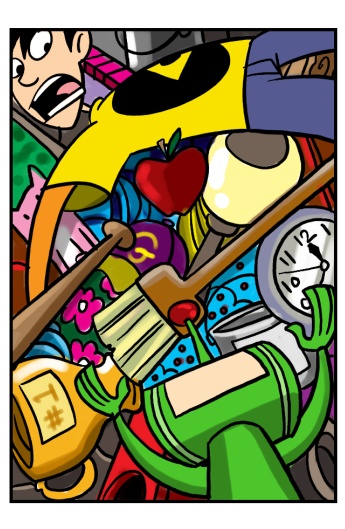 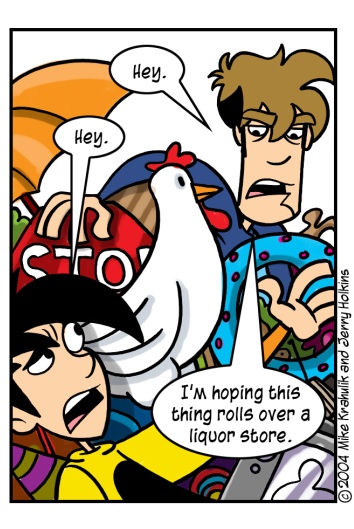 I sometimes hear it said that our comics are nonsensical forays without the post, which is a charge I really don't care about. It's not true most of the time. If it were, the comic would look something like this.

Believing that everything is going to hell and the good times will never be back is very easy to do, and honestly you could make pretty good case for that with the available evidence. As it pertains to games specifically, it's not uncommon to hear speeches at Internet street corners of the "end times" variety, lamentations that something dark has taken root in the formerly pure core of game development and we must endure a century of despair. Tyrants have seized power. Just as in an old fable, it is usually around this time that the hero is revealed.

Katamari Damacy is, in no uncertain terms, the finest 20 dollars I have ever spent on a new game.

Tell me if you've heard this one: As the tiny Prince of the Cosmos, you must roll a sticky ball around on the Earth, progressively picking up larger and larger things until your huge ball of garbage is transformed into a star.

I don't remember where I saw it, it was either at Insert Credit or The Magicbox. These days I see it in my dreams, as cats, children, and sumos drawn are into my vortex - grist for my inexorable march. The level usually determines your starting size, which itself determines the sorts of things you can pick up immediately - but the entire level scales to take the size of your garbage ball into account. For example, I started the level in a public park which had a gigantic clock face in the middle, and by the time I rolled my ball back there the clock was so small I barely recognized it. You start by rolling over toys, fruit, coins, and cookies and in no time you're grabbing golf balls and cassette tapes, moving up to cats and small chunks of garden fence, eventually knocking little girls off their bikes, and snaring both. You might start by rolling over tiny eggs in the carton, slowly graduating to larger eggs which hatch and cheep as you acquire them, moving on to sparrows and roosters. I don't know either, man.

The multiplayer isn't bad either, though it's hardly the star of the show. I'm basically mentioning it because if you have acquired more stuff than your opponent, the game doesn't differentiate them from any of the other fluff and stuff that is lying around - you just pick them up like anything else while they wiggle the sticks and try to escape. That's pretty demoralizing.

There is a extremely surreal hook for the whole thing, a strange storyline being told in cutscenes as well as reams of truly insane dialogue from The King of the Cosmos - highly odd turns of phrase that genuinely appear to be the product of an alien intellect. In addition, the game is a repository of exquisite music - I've imported music for more than 20 dollars from that expensive island, and none of those had the decency to include a game. It's getting harder to find, from what I hear. I can understand why that might be the case.