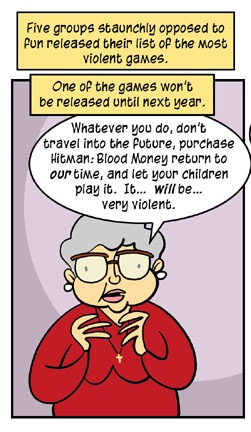 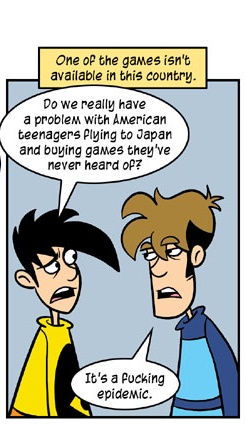 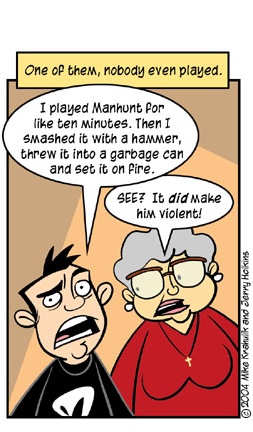 The thing I don't understand about that "Ten Super Evil Games" list that's going around - outside of the obvious, of course - is the glaring omissions any modicum of research would have revealed. There is no mention, even in passing, of "The Sodomizer" for the PS2. And yet again, parents' groups have overlooked the Wifebeater series, neglecting to mention Wifebeater III altogether. Also absent with no purpose or explanation are Violencing and Kill For No Reason.

I am very sorry indeed that I did not detail for you here my final impressions of Metroid Prime 2. I said that I would, but then I got Pirates, which absolutely incarcerated my mind. I'd better not go into it right now, or I'll never satisfy my mission objective. Let me table the topic by suggesting that Pirates has a sticky tongue, a very sticky tongue indeed, which it can whip out and draw you in to an entirely new category of moisture.

Outside of an inexplicable, insulting, and ridiculous backtracking endgame scavenger hunt that made me seriously consider quitting to spite them, Metroid Prime 2 has some of the most solid gaming moments this year. It's the kind of game that makes you pine immediately for a sequel, wishing you could just... I don't know, flip the disc over inside the machine and obviate the anticipation phase altogether. They didn't change the control scheme, there's none of the dual analog stuff that other shooters have used to such ergonomic effect. Many of the worlds they posit in the game are beautiful - Gabriel would love to take in those worlds with the more intuitive "look" stick other first person games take for granted - but it wasn't a dealbreaker before, and you shouldn't let it impede you now.

How Retro manages to make Samus Aran - a character who never talks, and who isn't really seen until the end - so engaging and even human in that Chozo suit is a feat of digital puppetry. After two games of this type, I'm ready to see how far they could take her - a game based entirely on 2D gameplay, recalling the origins of the series? Myself, I would like a much more elaborate story - revelations, twists, and genuine dialogue. I think it could really work. Back to Echoes, though - that's a sign of a game that really got its hooks in, when I start fashioning the followup right here in the post. Highly reccomended.

I'm picking up the new Prince today, and there appears to be something of a consensus in the reviews I've read. It sounds like the game has not entirely forgotten itself, but that things were lost in the premeditated grab for the mass market. It's not what I want to hear, but it so clearly mirrors my worst fears that the notion has already taken root.

Child's Play: Now that we are in December, you'll see direct links like that one to this year's drive in each post. I think of last year's $250,000 mark as a kind of "score" I guess, and as is the natural inclination of our people we have dedicated ourselves to besting it - but we need your help. To that end, we have put up a range of original art for auction whose value has thus far exceeded our expectations. There are still seats available for this year's schmancy charity dinner and auction, which takes place on the ninth. Steve from Hypothermia is kicking off his third Child's Play raffle this year, throw in five bucks and you might come away with a thousand dollar gift certificate to CompUSA. Of course, there's also the Wish Lists themselves, whose amusement payload is directed squarely at young people with great need of it. We'll have the first pictures this week, hopefully - in the meantime, do your bit and bury those hospitals in toys.

the whole thing starts with a box