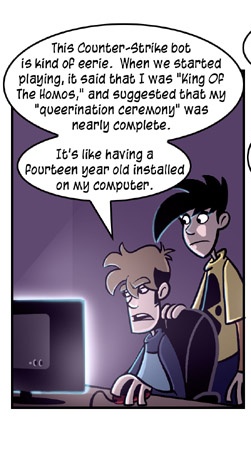 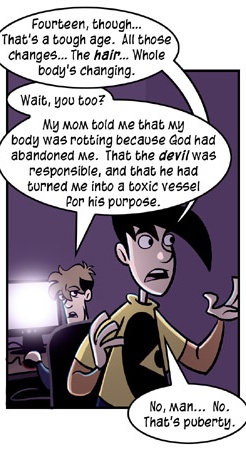 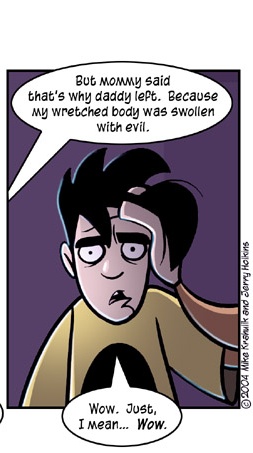 There is apparently a new bot for Counter-Strike: Source coming out today, and we have created a preview which details its unique technology. As for the rest of the comic, I wish that it weren't but it's essentially true. My D&D playin' ways were responsible for everything from failed souffles to the dissolution of my family to problems of the ear, nose, and throat.

In other news, we hereby revoke 2004 Game of the Year status for Blizzard's "World of Warcraft," effective immediately.

If you are familiar at all with the newspost, you know that it has been a spigot of almost unmitigated goodwill towards the title. We've been playing it for months in another form, and even chose to write thirteen comics for the guide. Understand that we don't need to take or even entertain projects if they are not utterly delicious, your readership of the site itself guarantees that. We took it because we loved the game and had faith that any hitches in the experience would be ground down before release. This has not been borne out.

I would not disagree with you if you said that the game was good - indeed, as delivered, I still maintain that in the Massive genre it provides the greatest reward for the least nuisance. It also succeeds in many ways corollary to that, but I've said plenty of things along those lines, and the puff piece phase is over - particularly with the European launch en route. Now is actually a good time to appraise their technology. It is, in a word, wanting.

I'm putting aside issues like class balance or Gamemaster abuse, because honestly those things are only a problem when the fucking server is up. They will no doubt be very interesting topics eventually, but it's actually four and five times a week at this point that I can't even log in to the game. It's not like I'm sitting here trying to connect at odd hours so I can catch them in something, either - this is in prime time, or on a weekend. The mail system works when it is good and ready. The servers themselves appear to have other things on their mind.

Every week, there is some new calamity that necessitates some huge response on their part, servers are coming down, but if you think that the servers coming back up again will represent an improvement in the basic functionality of the game you're mistaken. They took them down most of the day Thursday (and again for "emergency service" on Sunday), and when they came back up it should have been something supernatural but it was actually utterly imperceptible. It should have been like when the Genesis device hit and a lifeless rock became a fucking paradise. That didn't happen. So, if I say, as I'm about to, that their emergency service amounts to parlor tricks, what evidence can they give to the contrary? Because near as I can tell they've been doing "emergency service" since release, only they used to credit people's accounts for it.

If this happened in Galaxies, or Dark Age, or AO, of course it'd be everybody everywhere piling on. But it's Blizzard, and since they made a few good games years ago now they can do whatever the fuck they want to. Great policy, and it totally serves consumers. Good job. Where's Lum The Mad when you need him.

When a young person comes into a noticeable sum of money, it is often the case that strictures are placed on its expenditure. The thinking is that such a person will plow their inheritance in things that are critical to them at the time but do not represent a wise long-term investment, such as Sweet Tarts. A trust fund protects this amount and purifies its purpose. So it can be said for the coveted Game of the Year award - it was given too early, and they have squandered it. It is now withheld. It will be released only when they prove themselves worthy stewards of it.

there's hints of a prince in the end