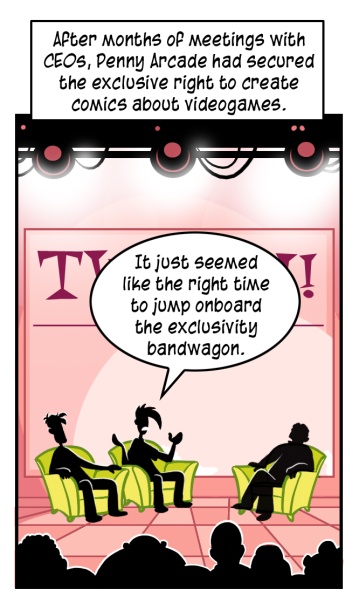 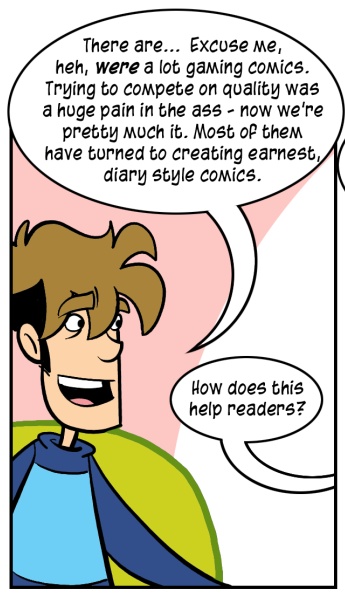 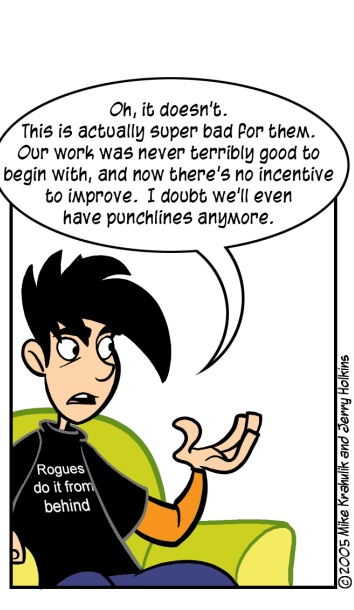 One can hardly keep up with the level of consolidation and treachery in the industry anymore. My interest lies more in what these companies produce, so by and large I'm content just let them slink around in the dark and kill each other. Product, not production. To cite just one example, I'm interested in fruit - but not botany or agriculture. So there you have it.

Eventually, it's not going to be the kind of thing I can avoid, because I'm going to walk into an Electronic Arts retail location here in a couple years and purchase a white box with the word "Game" on it, and that's going to be the industry. EA just snapped up DICE, as I'm sure you saw. Before that was the much ballyhooed NFL thing, to which Take Two responded by securing MLB exclusivity, of a sort - and their recent acquisition of Sega's Visual Concepts sports studio will gird their loins for the coming battle. It's madness. I don't even have time to jot down an ironic comment on the state of things before the constituent things have been entirely reconfigured.

That, more than anything else, is why we sought to secure "rights in perpetuity to any and all humorous comic interpretations and/or situations arising or inferred from the electronic entertainment industry and/or the products thereof." The fact of the matter is that with strips like Ctrl-Alt-Del, VG Cats, PvP, and that fucker Greg Dean (congratulations on the engagement!) nipping at our heels - and the black day of the single, hydra-headed Ultrapublisher ever hastening - the air's getting a little thin.

You might be wondering what recourse is available to you, the disenfranchised web auteur. Honestly? Dig a hole and die in it. I have crafted these bleak circumstances, and I have set them upon you like dogs. Your exertions will only make you more delicious to them. They will find you cast in blue light, huddled in the subdirectory where you shiver with your .gifs, and they will end you.

Ubisoft contacted us about doing a comic series for Splinter Cell: Chaos Theory, and having already accomplished a fairly elaborate sixteen page project for them we felt confident taking it on. It was around this time that the computers we do the writing and art on began to behave very strangely, wrestled away, mouse pointers juking back and forth in a tug of war between ourselves and unknown parties. Finally content to let these undisclosed guests "drive," they revealed to us secrets nestled in powerful DIVINE encryption, riding broadcast spectrums that whisper outside the knowledge of consumer electronics. The content of those clandestine voyages was illuminating. It can be found here.

sometimes i think you're avoiding me