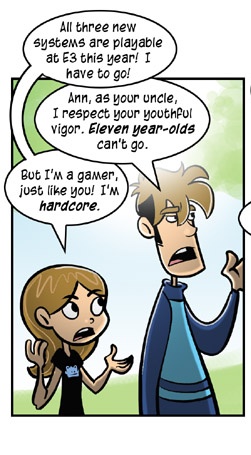 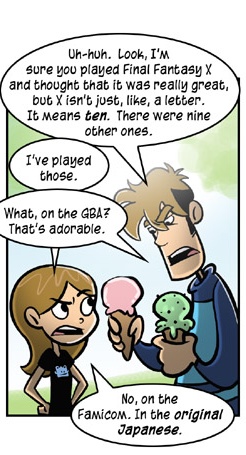 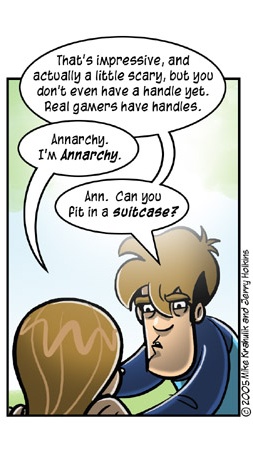 As might have just become apparent, we're thinking about trying something different for this year's E3 strips. And also, it's kind of hard to like earnest young Ann, who herself seems to like The Merch. But that's not outside the statistical tolerance of her demographic.

I've been thinking that referring to Spokane as the ruptured asshole of America and indeed the world has not taken something critical into account. It is cheap to live there, and if you never have then you don't even know what kind of expensivity threshold I'm talking about here. Let me give you a good example.

Real Life Comics, which I won't link because you probably already know about it anyway and his server doesn't need the hassle, is moving up to Seattle because the rent is better than it is in Sacramento. Um, that's one way of looking at it. I guess it depends on where he's going to live up here, but the idea that you come here to live simply makes my mind hurt. You know where you need to go? I mean, if you're planning on moving away from everyone you know anyhow?

Festering pit, I know. The people there live inside the Earth's own bleeding hemorrhoids. But here's the deal: I lived in an area called Hillyard, which is almost literally "on the other side of the tracks," and I had a perfectly livable room for 280 dollars a month. Broadband is fairly plentiful, and there is a massive chunk of downtown where you can access the Internets - any one you like - on the free.

We aren't strangers to desperation. Penny Arcade has been our "job" for a long time now, but the kind of money it was bringing in was only viable in a place like Spokane. It just occurred to me yesterday that if you are physically untethered to a location, and you want nothing more than to survive according to the whim of your creative output, and what you like to do anyway is play WoW or whatever in your spare time, then what the fuck difference does it make where you store, temporarily, your barely animated husk?

Oh, and something else, motherfucker! Your bongos are looking super ratty. Maybe your other friends are more diplomatic about it, but I'll be Goddamned if I'll put my palms to a bongo that ill-used and decrepit. If you want me over there again you need to invest in some covers for that shit, on the real:

I can't even look at your greasy bongos anymore, man. New rule: put some fucking covers on.

to smile at terror