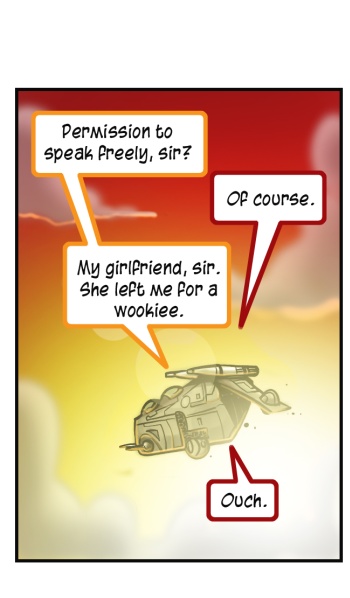 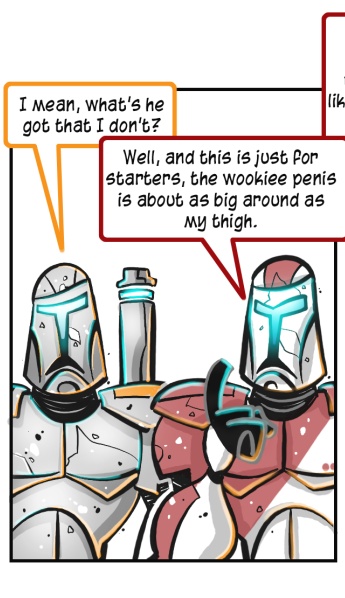 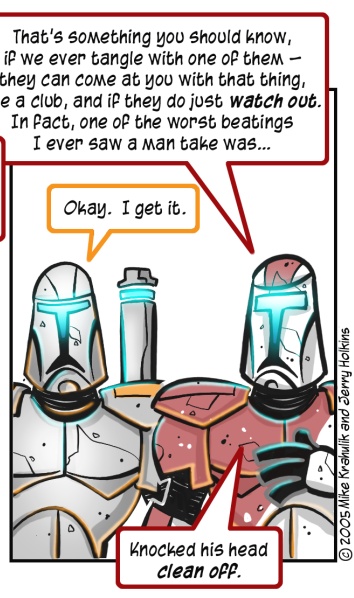 Just saw that Republic Commando went gold, which we have decided to commemorate. I really can't wait, for all the reasons I described in the demo, and of course enthusiasm is always compounded in the period between an exceptionally tender trial balloon and the retail release.

One never really knows what what is in for when they put themselves at the mercy of Lucasarts. They would probably rather I didn't mention games like Rebellion or Force Commander, though those games dispensed wholesale suffering like a sweeping plague. Battlefront, which you will recall that I did not enjoy overmuch, is not something I would place in the prior category, which is to say "Games Which Are Themselves Glistening Boils." It was just doggedly, persistently unambitious, something that license encourages. Balance those out against some of the most beloved games in the oeuvre of personal computer gaming - most especially in the somewhat revitalized adventure genre - and they still have many terrible releases worth of goodwill built up.

Most recently, I found Mercenaries to be a fairly unapologetic exercise in raw hedonism, similar to GTA but sporting far more tolerable controls, with heavy, substantial vehicles and acceptable levels of self-direction - which is to say, I think they did a good job with it. It sounds clinical but I meant the whole thing as a compliment. Certainly it did not sport an appealing inner city storyline, and no-one looked like Eazy-E, but I came to terms with that. Just before that was Knights of the Old Republic II, which is an excellent game in its own right but deserved a longer development cycle and more powerful technology. The drive to "annualize" games, to release one a year and realize EA style profits, works better in the sports genre they pioneered it in. For other genres, I'll just come out and say it - it looks greedy most of the time and the products, testing, and execution suffer for it.

Until we see their usually lavish annual spread at E3, I won't know what to look forward to from them - but I can't help being drawn into Star Wars: Empires At War especially, as it appears to be created by a studio that might as well be called the reconstituted Westwood.

I always forget to mention important things that happen at conventions, largely because time takes on some exceedingly odd properties at events like this. I'll meet someone I really respect and not remember it until a day or two later, my mind packages these scenarios and then drips them out to me at a rate I can actually perceive. I mostly just try to survive these things. I did, however, really and truly meet Robert Kirkman, who was extremely genuine and polite the whole time. I think he might have thought I was fucking around with him, that my adulation was not genuine somehow, but I don't read "comics." I read things written by Robert Kirkman and Brian Michael Bendis. They constitute the entire genre.