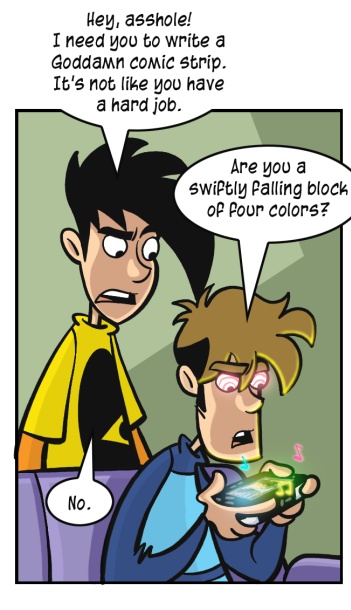 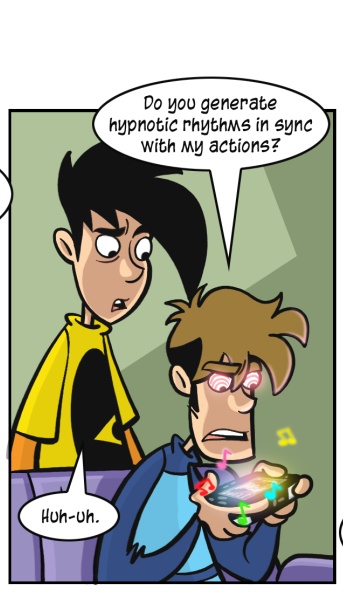 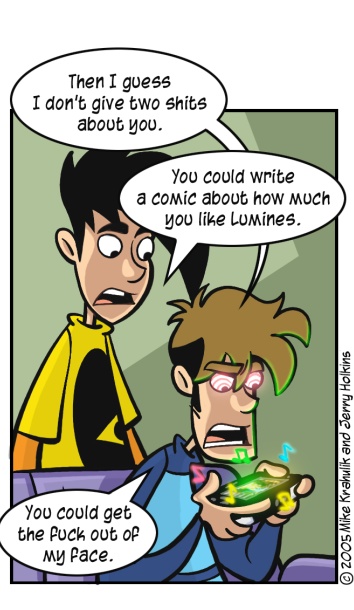 Lumines belongs with every PSP purchase, but if you read gaming news at all you've seen the nearly universal worship. Today's comic is an exaggeration, of course - anyone who has played Lumines will tell you that it renders you incapable of speech.

Usually when EB says that it will have something on the "twenty-fourth," what that means is no earthly power could produce said product on that date. So when I began to read on Evil Avatar that people had indeed gotten them - and that some retail outlets simply had the them salted away for up to a week - I momentarily regained my youthful vigor. Robert and "Gabriel" were cooperatively tackling a Cinnabon when I arrived, like a beast of legend it proved a greater feat than one man's capacity for heroism. I sat down to talk about the things that were important to me but they'd already covered every conceivable topic and simply couldn't muster the interest.

Once the distribution process got underway, it became clear that one of the men behind the counter had been grievously injured no more than an hour ago. He had a deep gash below his left eye, what I could only describe as cheek trauma, and a ghastly perforation on his chin that amounted to a grisly goatee. He's Rob, we come in here a lot, and we asked him what happened to his body. Apparently a man struck him when he was riding his bike to work, and then drove away really fast and merged onto the highway. He shambled his broken form over to work so he could help people get their PSPs.

Certainly, he had his own PSP to obtain - but come now. Let's not impugn the man's nobility.

I said he should let his Linkshell know what happened when he got home, and we began to discuss the car in terms of its considerable game statistics. FFXI comes up a lot when we go in there. That's his thing, and I have a standing order with him that I receive screenshots of any fly new gear. He had recently obtained Fenrir, a kind of spectral ultrahound. This inspired a brief ovation, but shortly thereafter the holes in his face began to weep a fluid of some sort. We told him to go to the doctor, which he made clear his EB wage was not up to. I shuffled uncomfortably.

I apologize for making you wait so long, the flow of time yesterday took on such an odd consistency that I really felt compelled to decompress it. If you want to know whether or not the Playstation Portable is good, it's a topic beyond debate. It isn't "good." It's important.

We have a relationship to the future that is odd, in that we are constantly trying to create the preconditions for events we expect to happen. We collaborate with linear time to engineer outcomes. There are, however, coordinates in this progression which serve as milestones of a sort: points we can refer to and declare as evidence of forward momentum. Holding the device made it clear. The "future" envisioned by my eight year old self has arrived. Now, we must invent new futures.

trogdor was a man