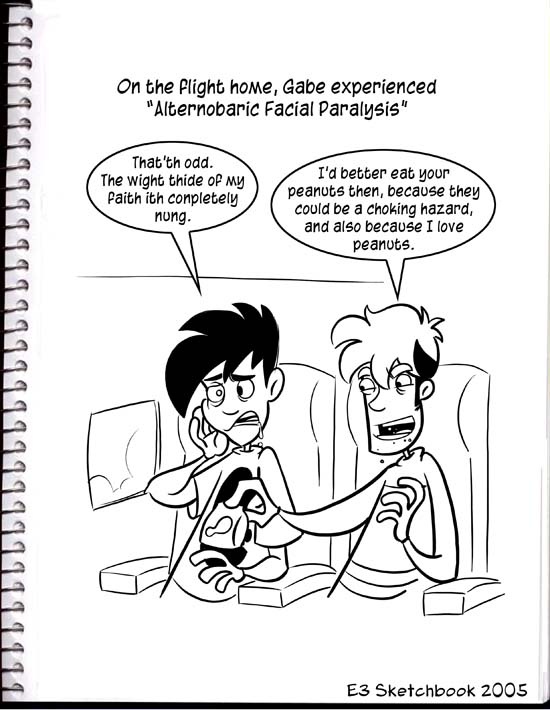 As becomes apparent every time I write after a trip, the tension and anguish your "flying machines" cause me is intense. I apologize for writing about it absolutely every God damned time, but finding the way to phrase a situation that frightens me is how I deal with it. In any case.

I suppose that, in a way, I was blessed then when I merely had to endure ordinary, run of the mill horror, as opposed to losing control of the right side of my face. It's all funny ha-has now, but at the time, his discomfort was inexpressible. You'd think that being paralyzed on that side would close the eye, but it doesn't - and the vesuvian pressures building behind the eye cause it to press slightly forward, and this conflux of phenomena shamed him, and he covered his whole face with both hands, rocking gently on the precipice of tears. I tried not to laugh when I saw it, and I wish that I hadn't, but the left side of his face was such an exaggeration of a frown that I imagined it was the intensity of his misery that made it so, as opposed to some transient malady.

It was really just the malevolent cherry atop a sundae of despair. Our friend Mike dislocated his knee, we all got sick, and to be perfectly honest this was the least satisfying E3 I've ever attended. I've only been to six, so it's altogether possible that seven years ago they just shot every tenth person. That might - might - have been worse.

I think with "three systems launching" we thought there would be a lot more beef, but as I've established before only one system actually launched, and the titles that would really sell me the system weren't actually there to play. Sony wasn't really ready to launch either, but they made it seem as though they had, and Nintendo showed us what the Revolution might look like. I appreciate that they didn't make a spectacle out of what they didn't have, like some companies. That's just the console side of things.

For my part, seeing what wonders PC developers have in store, I think I've bought my last video card. I didn't even get top of the line this time, I squeaked in under four hundred dollars, but I've had it up to fucking here subsidizing the next generation of consoles with my early adopter money. Before Doom 3, I was satisfied with a hitch or two here and there when I was really putting a machine to work - but seeing the way it is supposed to look, on hardware with the strength to manipulate those realms effortlessly made it clear. They've priced me, as a financially stable adult, straight out of entertainment software on the personal computer. I crave the esoteric strategy titles and wild experiments found on PCs, but it no longer makes a lick of sense to maintain this rig in the face of four hundred dollar, triple core consoles. The WOPR taught us as much in WarGames: the only way to win that game is not to play it.

but leave the handle sticking out

At Least Wait Until I Leave The Room