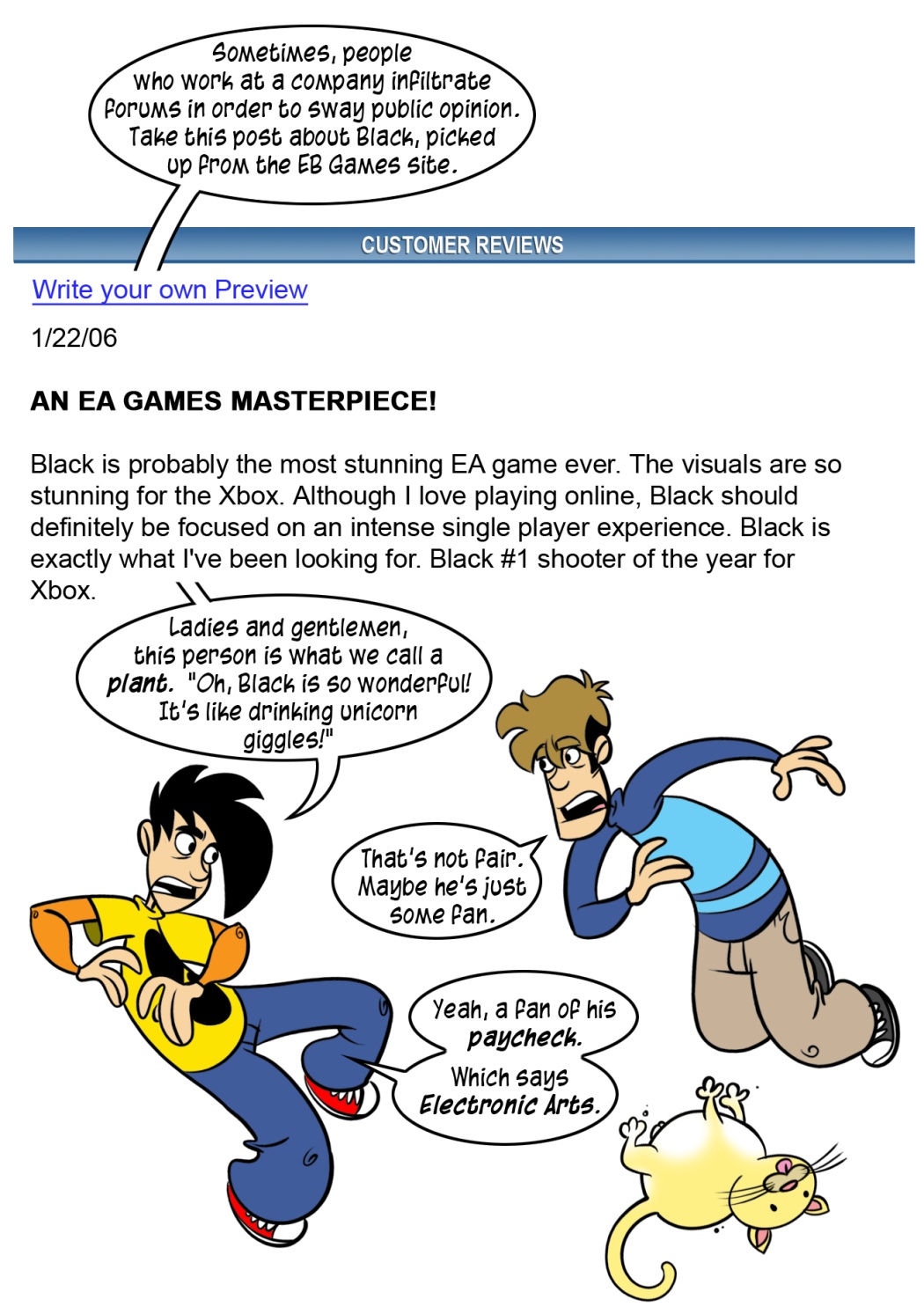 The post at EBWorld, included verbatim in the strip, was so relentlessly on message that  we concocted a paranoid theory that isn't really that paranoid or theoretical.

After seeing the many exquisite videos of Black - the "Matrix Trailer" in particular - there wasn't a lot of hand-wringing associated with our pre-order.  Further induced by a playable demo given out for such orders, we returned to our Batcave equivalent to dig in and congratulate ourselves on our no doubt excellent purchase.

In our inimitable fashion, we have described to you in the past how the software they show in May at E3 is magically transmuted into the demo gamers play seven, eight, or nine months later on a coverdisc.  It's a snapshot of the development cycle, tree rings or some shit, and there are sometimes very real differences between that demo and what percolates through the retail channel.  You can see some things, already.  There's an effect when the player reloads in the newest videos - your awareness of the gameworld is cropped down to the weapon itself - that here's no trace of here.  One wonders what phase of the project this sample represents, because I can absolutely do without the game they're showing me here.

After seeing much better realized play spaces in action packed/meticulously prepared footage, the level, the gunplay, and the arsenal on offer really isn't anything to get excited about.  I shot through walls and shit almost six years ago in Red Faction, so you're going to have to bring a little more than that.  Are they thinking that we'll forget?  I wonder if they have a level where you eat dots.

After a couple nights of trying to get the new Chaos Theory co-op maps working on the 360 via emulator, I think it's time to hang it up.  It crashes, reproducibly, at about sixty-five percent of the level load.  It would be one thing if I could then go on to play sixty-five percent of the level, but it actually hard locks the console, forcing me to leave the couch and physically manipulate it like mankind was forced to do in the olden days.  I've crafted a novel solution to the issue:  I am going to play the game on the original Xbox, where I am told compatibility is almost assured.  I  wish that I had arrived at this plan sooner.

and the night got deathly quiet