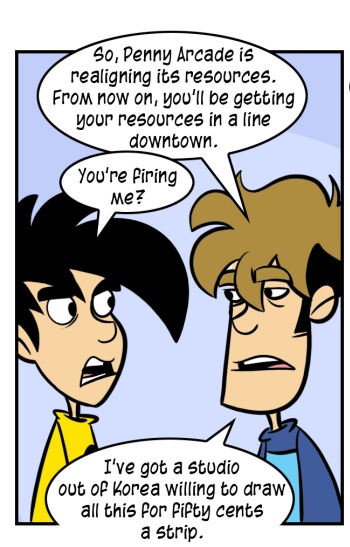 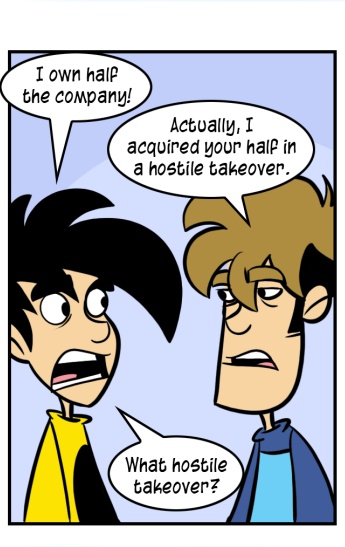 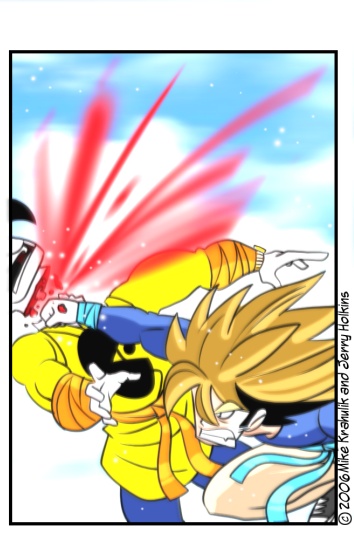 The new strip is now available - you should be able to perceive it with your optic nerve.  It started out with a discussion of the EA layoffs and the odd nomenclature they used to describe what they did.    They have to keep changing the words they use to describe this process, because people catch on to this shit.  You can't really get away with a term like resizing anymore, because people are like, wait...  You're changing the size?  Well, what is the new size?  That seems smaller.  Did you fire someone?  etc.

And now we see why, of course - those gods must have their sacrifice.  If you lost your job because it was Q4 and this number was not larger than that number, you have our condolences.

After that the comic went to a strange place.   Korea, actually.

I wanted to wait until I talked to Kiko before discussing Empire at War, because he probably spends the most time on real-time strategy games out of any of us.  I fall in and out of the genre, myself.  I like them best when they don't behave exactly like the genre kings, peace be upon them - for example, I don't really enjoy building bases according to the old ways.  I used to savor planting those blueprints according to my exacting and most likely fallacious ratios.  These days, I'm intrigued by how Rise of Legends has buildings that must be placed elsewhere, you also build onto a city core by creating specialized districts.  I also like the metamap aspects of the original Rise of Nations, something that has been maintained for the (spiritual) sequel.

Empire at War does a few things that are counter to RTS wisdom, or at any rate RTS tradition, and I'll be curious to see if they're rewarded for their pluck.  It's hard to call it an RTS with a straight face, actually.  It's a galactic empires game that happens to have real-time combat resolution.

It's trying to simultaneously do more and less than most people think, and without playing the demo you won't know what I mean.  I didn't really understand it myself when I started playing, and it was right there in front of me - I'd simply generated a kind of template I thought the game was trying to adhere to and not succeeding.  There's only one resource, money.  Money is generated by owned worlds, not storm troopers shuffling in and out of mineshafts.   There's absolutely no base building, as we take it to mean.  Kiko was looking for a game that combined Homeworld style stellar combat with a more genuine genre experience once troops hit the ground, and I think he could probably do without the galaxy management stuff, which is fairly abstract by RTS standards.

I suppose that I like it precisely because it isn't a straight RTS.  Through good planning, I can create a situation where I bring a knife to a fistfight on any one of the worlds in the map.  The Y-Wings that survived the orbital battle will give me the ability to perform bombing strikes once on the surface.  Then, utilizing key "named" characters and a sympathetic indigenous population, I can bring down a larger entrenched force.

It's got three multiplayer modes, which you can see detailed here and here.  You have a two player mode that resembles the campaign experience, and then separate (co-operative) space and land battles which utilize more traditional RTS elements.  I've been chomping at the bit for the retail copy from the moment the game "clicked" on my second playthrough.  I haven't played an RTS online seriously since Red Alert II, and I have a fantasy wherein I actually spend some time embroiled in a bid for interstellar domination.  We'll see.

One thing that didn't make sense to me:  the cinematic camera.  It can supposedly be activated at any time to provide a dramatic perspective on the proceedings.  I have been able to get somewhat stirring results out of it in terrestrial conflicts, but using it in a space battle has - to date - provided exactly zero amusement.  Imagine if you could watch a car chase from a camera mounted inside the glove compartment and you will get some idea what I mean.

through the cracks in the wall