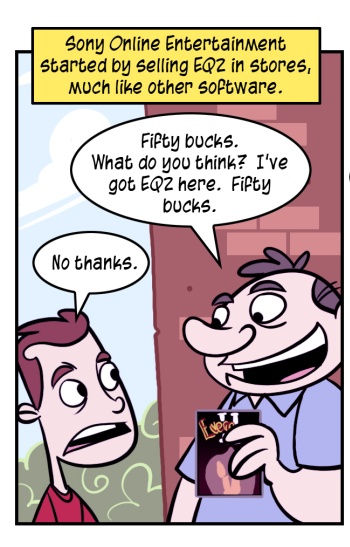 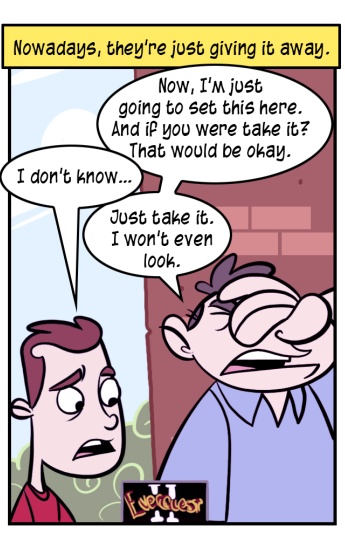 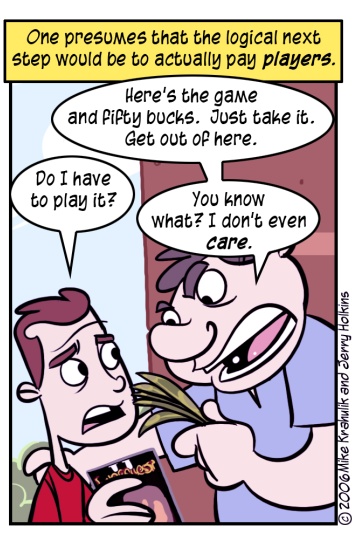 You might have heard that Sony Online Entertainment was now giving away Everquest II to Fileplanet Subscribers, which we suggest may be one plank of an overarching strategy. Though it rarely gets to the final stage we detail in the strip, simply handing out the client for fee-based games happens all the time: Puzzle Pirates operates under this model, as does Meridian 59. Same with A Tale In The Desert. Gunbound, the self-proclaimed "Shooting game of new generation," used to be funded by players who paid a premium for avatar customization items. Might still be true.

For smaller scale MMOs, especially from Korea, "giving away the farm" isn't such a big gamble when the farm itself must then be rented on a monthly basis. Even then, it's rare to see it from supposedly healthy "marquee" brands of the MMO space. EQ2 has recently been altered to give new characters much greater control over their destinies, something they probably want people to know about. But they've also got Kingdom of Sky coming out, and Desert of Flames on store shelves already. Radio Shack used to give away free flashlights that used no less than six D batteries, which they were more than happy to sell you. It may be that a similar procedure is being employed here.

The full game is only twenty bucks at retail these days, and a month of Fileplanet is three or so - if you were considering trying it anyway, it's an option. Then again, Sony's planning to sell every MMO they own in a single package for forty bucks, and you could subscribe to all of them for a single fee. I can sense that you are slavering at the prospect.

Gabriel has nothing polite to say about the game, whose three and a half gigs I believe he just uninstalled. The aesthetic - and I think he would assert that Everquest II has no unifying visual theme - will always be an insuperable barrier. When he hates something, typically that is my cue to dig deeper than he has and find the buried but ameliorating quality. But after playing World of Warcraft for well over a year, I'm not itching to bind myself in service to some new master - exquisite crafting or no. Call me when the heavy hitters of the Massive genre have moved their timelines to a point somewhere near the invention of the combustion engine.

Whatever persistence I crave is satisfied perfectly well by City of Villains, but my evenings are largely spent brawling in unregulated Blast Clubs that roil in the shadows of major American cities.

I was waiting to import a DS Lite until after the D.I.C.E. conference, as I had a reasonably strong assumption they would announce the final colors there, and preorder options beyond Crystal White would magically appear. I went almost all the way through the process, populating fields with my most intimate data, but ultimately closing the browser - interrupting the scenario at a point dangerously near its sensual apex.

The need felt so urgent when I began filling out that form, spurred by those prancing portables whirling on this page. Indeed, there is still a chance my resolve may fail.