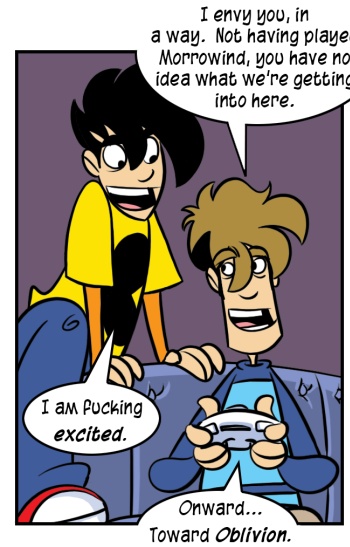 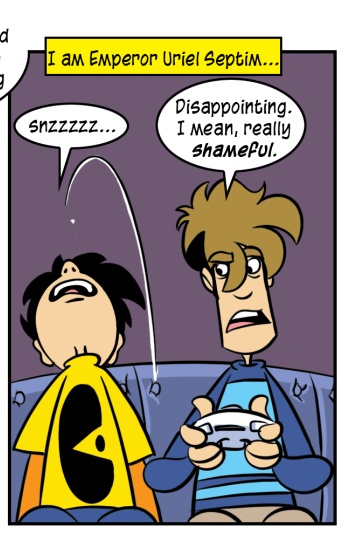 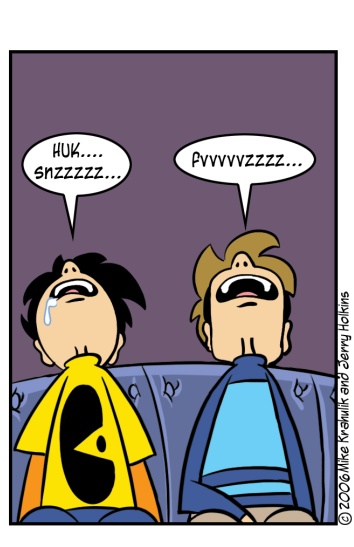 Don't pay attention to Gabe, I should have known intuitively that he wasn't ready for The Elder Scrolls. It turns out that I'm not quite ready for it either, for a different reason, but I'm not sure if mine is actually more noble or not.

I could tell things were going to go off the rails almost immediately, when he suggested that I stop screwing around with the character generator. That's not something I do. If anything, I've been known to keep on screwing with them - I mentioned a few months ago that the character creator in City of Villains had practically become the game. But elaborate character creation in the absence of multiplayer is, for him, a sort of masturbation. If you create a character, and no-one is there to see it, what's the point? I suppose it's the John Gabriel version of a Zen koan.

Philosophically, Oblivion couldn't be more different from the Japanese RPGs I used to lure him into the genre. A game where your character is completely defined before you ever pick up a controller, who then runs an essentially linear track until he reaches the "source of the evil" doesn't really fit what I think of as "role-playing," but that's the sort of experience that has come to dominate the term.

I'm not even comfortable referring to the Elder Scrolls games as RPGs, and not just because the term has been so depleted. I think we call them that because we don't have an umbrella term that means "fantasy sandbox." It isn't just a role-playing game where you have some leeway about which plot node fires next - genuine liberty is omnipresent. Grand Theft Auto is considered a "sandbox game," but your relationship with that environment isn't particularly granular. I won't linger too long on the pun - but imagine your alter-ego making explosives out of cleaners he bought in the supermarket.

That's the sort of freedom you find in a game like Oblivion, though. If you see a weird mushroom at the base of a tree, it's probably not just decor. It looks good there, true, and it gives the proceedings an air of authenticity, but it's also a legitimate in-game item you can use alchemically. Played solely for the critical-path, baseline narrative, there are RPGs that deliver a more polished experience - this polish is usually a result of diminished player freedom. In terms of raw variety, it's almost impossible to find a competitor.

I had it in my head for some reason that the 360 version would attract me, but in practice this was not the case - I just can't play it with a gamepad, and graphically it's hard not to prefer it on the PC. I really respect what they've accomplished, and I hope that it eventually gets a firm grip on me. That hasn't happened yet, though I feel like the raw materials are here. My greatest foe has thus far been something I've mentioned before, what I've begun to call "opportunity paralysis."

The almost unlimited functionality definitely activates some hoarding response in my brain, so that if I don't pick up every dusty scapula with a shred of flesh still clinging I get terribly agitated. I stood in a cold dungeon for almost ten minutes before I could build up the strength to discard some rat meat. That isn't their fault, of course. You don't lose points for increasing player freedom to psychologically devastating levels. I was not aware that OCD was something you could "catch," but I'm beginning to think that I've got a bad case.

I missed the window to mention it last year, but my man Kwip rocks a Multiple Sclerosis fundraiser on the annual - please stop by his place if you'd like to know more about it, maybe see how you can help out. I've felt bad since last year when I didn't mention it, so I'm going to emphasize this motherfucker with with some bold-ass text.