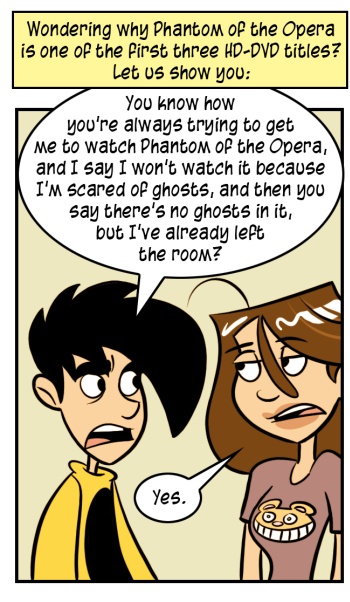 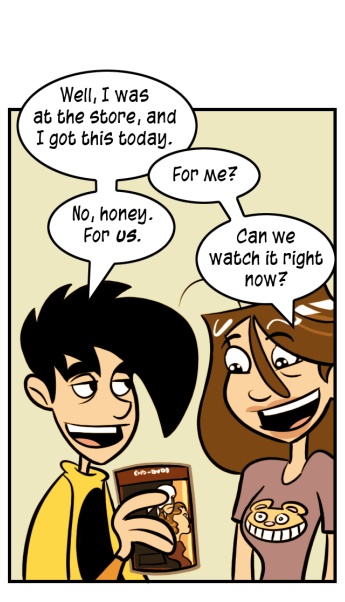 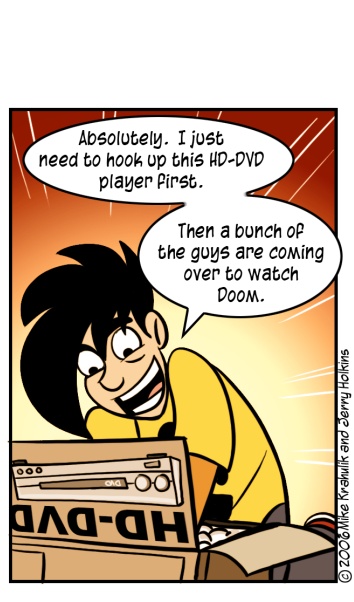 I discuss ennui relating to the coming media apocalypse in the imminent podcast, but I am only one of two people who operate this website and we are not always of one mind. Even if a person were interested in high-definition content to drive their robust new display, internecine warfare poised to fragment the industry, ravage your technology investment, and punish early adopters isn't exactly an aphrodisiac.

I'd love to see what that Serenity print looks like in HD, though. Bastards.

I wrapped up Tomb Raider last night, I suppose I should be clear and say that I wrapped up Lara Croft: Tomb Raider: Legend: Suffix, and I think that Crystal Dynamics made a game here that is more than good enough to help you forget some of the silly garbage that is in there for no reason. I don't want to make a huge deal of it, but in a game this good otherwise this motorcycle stuff simply had no right being there. I understand that games need to be a certain length, I do, but the next time you need to pack in some Goddamn fluff or something, make a heavy stone gate that slowly opens over the course of forty-five minutes. A lot of this ancient shit is pretty decrepit nowadays, nobody's expecting a fucking turbo lift.

I ended up playing it on the PC, but using one of your (ordinarily, quite distasteful!) wired 360 controllers. The twenty dollars I saved buying the PC version over the next-gen product made my trials below ground seem almost sensible in their way. There are things about Lara Croft that have always just been inherently kind of nonsensical, the exhibitionist countess with the Daisy Dukes on, and even though some of the visual touchstones remain - out of homage or brand identity - Legend actually makes sense of the series and her place in it. This came as a surprise. So yes, I said mean things, and the game is short. It's also great, and they deserve the franchise if they're going to treat it with this kind of care.

I was interested to read an interview with the man who designed Lara Croft, where he makes it clear that their Tomb Raidin' gameplay - which is to say, the enclosed subterranean holes we associate most directly with the series - was largely a function of technology limitations. I found this fascinating. As hardware increased in power, what it actually enabled them to do was create spaces that felt less and less authentic to Tomb Raider fans!  The limitations themselves helped to create what we think of as "classic" gameplay, here and elsewhere.

This Nyko Thing seems, on the surface, to be the spigot whence flows a clarified sort of pimp juice. We had always fantasized about about making an authentic faceplate for the 360, no doubt hewn from imported plastics, but after I got that "wood grain" model I saw no reason to change it ever again. The official plates are significant chunks of plastic that feel like real additions to the console when you "install" them. That said, a customizable shell that contains user created designs, along with printer-friendly templates and a free, cross-platform app to create designs? Yes, I think so. We just picked a couple up, and the shell itself feels solid but the matte paper their templates are made of sucks up a lot of the vibrancy and clarity of a design. We'll goof around with it for a while, and I'll tell you what we come up with.