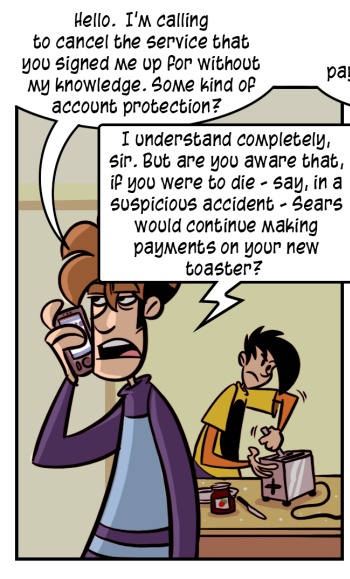 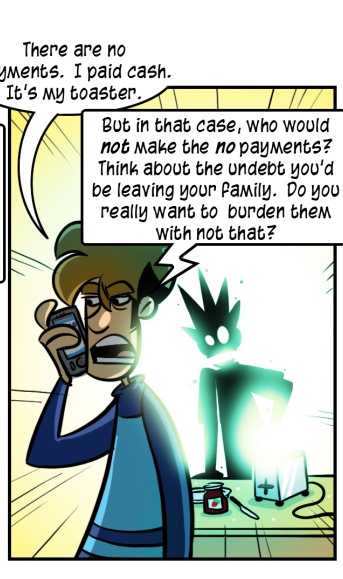 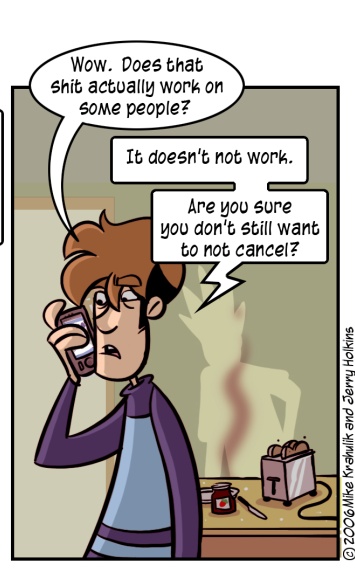 I wonder if lightning flashed when they came up with this. Did the lights dim? Also, I imagine shaking arms raised in triumph around an oval of rich boardroom oak. They signed me up for some kind of "payment insurance," and if you do not read every sheet inside their twenty pound envelope you might miss it. I would love to know how much money they make, annually, because people have chosen to live their lives as opposed to scrutinize every paragraph of their cyclopean document for hidden treacheries.

I always want to be super mad at these people when I call in, the incandescent avatar of the consumer, but I was those people at one point. I can't purse my lips and nod slowly at those who, seeing paths clearly marked Good and Evil, chose evil as I had once done in my savagely misspent youth. I only lasted a week and a half, which I saw then as evidence of my indomitable spirit. I can't really speak to that, I believed a lot of ridiculous things. And it's not as though I stopped believing them, but by now I've believed them so long that they've graduated to traditions. It's like, we don't really ask why a rabbit would bring chocolate to a person anymore.  I can imagine a couple raised eyebrows on that score initially.  Now, we just accept that rabbits operate in concert with chocolatiers.

I always think I'm going to say something clever when I call these places up, but whenever I try to start in I find it very hard to maintain my appetite for cruelty. I don't know why they work there, but it probably wasn't an authentic choice. What's more, the job is so miserable that even if I were to level my considerable verbal skills, they are most likely suffering at a level beyond which any additional torment would be wasted.

You make all these little deals with yourself to manage it. It may be that he picked up a Caramello and it's just sitting there on his desk until his break, waiting, centerfold luscious. He will try to make it last the entire fifteen minutes. He very nearly did, yesterday. While he's talking to me he is dividing the bar, in his mind, into discrete blocks which also represent the period of time each one will take. The person he is talking to seems tense, but is making no effort to deviate from the script. Sometimes they jump the rail and you have to improvise. He's letting me get all the way through it, first refusal, second refusal, third refusal, and... Done.

I always imagine looking up into the sky to see a great, black boot descending. Does he also see the boot? And does he then calculate where he can stand, safe, in the raised part of the waffle?

this is the way that the world is run