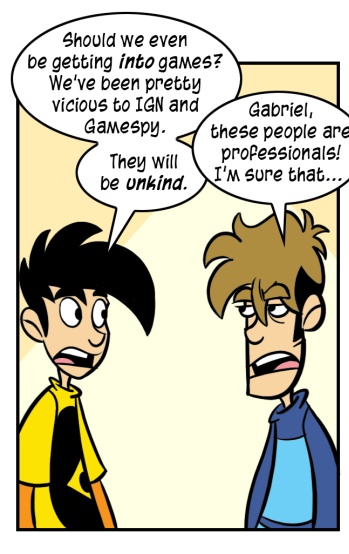 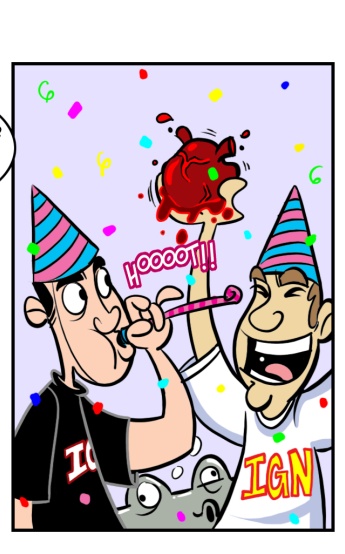 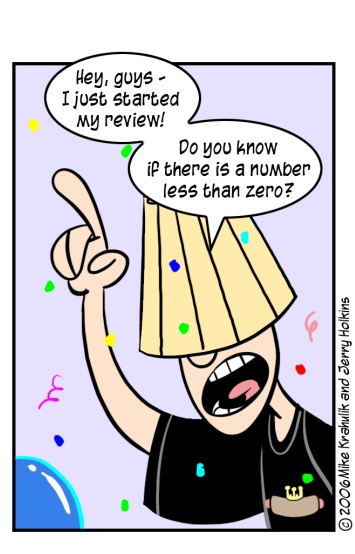 It has become the Saturday tradition to do the next strip upon the expo's stark and terrifying stage, but since Armadeaddon needed its proper epilogue it got moved out to Wednesday. Gabe was highly indulgent of audience suggestions in the final version, far more than he is to me, adding many, many things based on them being called out from the microphone - he has a version with more additions still that he'll be putting up later today. But there are things in there like the blue ball in the last panel - to say nothing of the official "Hot-Dog Fairy" merchandise! - that began as anecdotes and have now graduated to true PAX lore.

Hours after we'd committed the strip to pixels, I met someone from IGN who was completely awesome and immediately felt bad. My conscience often hinders my ability to demagogue at full efficiency.

As a self-funded, completely independent project which is then digitally delivered to the three major PC platforms, what we're doing with Hothead Games is exclusively for readers - so we don't expect most people to get it.  We are not making a mass market product to "show the industry how it's done." Hothead isn't licensing Penny Arcade, we are making it together - Gabe and I are responsible for the look, story, and dialogue (i.e., the Penny Arcade) while their sturdy men and women enter the Code Mines in search of pure software. We could have thrown our hours into something "feature length," but decided (correctly, I think!) that something that lasted a few hours and asked for your input would be more fun for everyone involved. Hopefully you will agree, and we are doing everything in our power to secure that desirable outcome. If you thought that Armadeaddon constituted a shattered dam over which flowed a million gallons of pure fanservice, I feel comfortable saying you have not witnessed the full power of this fully armed and operational battle station.

While PAX loomed large, I wasn't able to appreciate just what a fabulous spread awaits gaming enthusiasts this "holiday season" (which actually begins in September). Now that the azure monolith has retreated into space, I can remember things like The Console Formerly Known As The Revolution and Gears of War and Disgaea 2, recall with clarity treats like Final Fantasy III or Splinter Cell: DA. Everybody has something to lord over everybody else, and forums will bubble with the heat of it.

i can't get it right