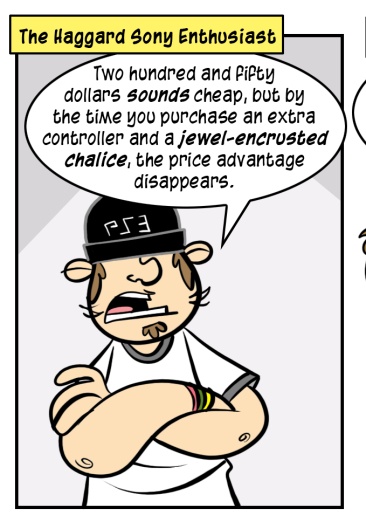 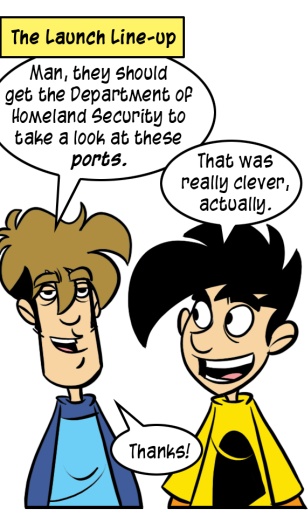 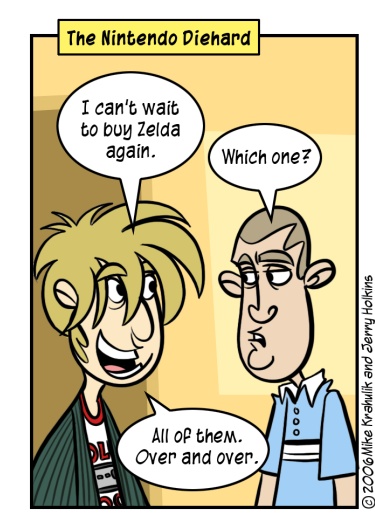 All the news about Nintendo's newest "thiing" is on the table, and now - with great consternation - the Internet responds. We obtained a digital audio recorder to make recording podcasts for you a straightforward enterprise, and I think we're close, but our extended meditation on today's facts and figures was somehow devoured by the machine I have just described. So, I'll try to remember the stuff that stood out.

Initially, there was a period where we ridiculed the new system's strange desire to tell us what the weather was like. You would have heard us slowly come to the realization that this feature (like the included news ticker) would be completely profound to people who are not us. He had a relative who relied upon the - brace yourselves, brothers and sisters - WebTV of all things, and it was a simple matter to imagine that person turning on the system in the morning to grab headlines and catch the weather. They don't check the weather, as I might, on some Windows Mobile 5.0 doodad. Doodads make them... uneasy.

Breaking the machine's base functionality down into content "Channels" made sense immediately, without the need for any revelations like those documented above. The gamepad for the system is a Goddamn remote control. And who knows, maybe I'll come to rely upon their Weather Orb. I thought Pictochat was pretty stupid until I went to PAX, where people - perhaps hundreds of people - utilized the application to draw cocks wirelessly.

I expected the price to come in a little lower than two-fifty, just as I think most people did, but I think they're in a tough position. I'm more than satisfied with the steep, almost treacherous price delta between it and the Xbox 400, and the difference between this product and Sony's offering is so vast that the person presented with this disparity would assume that there had been a grievous misprint in their Sunday circular. The price needs to simultaneously say that "we are not those other guys" while somehow retaining the idea that their machine is the same type of product. Plus, it's not like they have some beleaguered little twist of retail shrapnel here. People want this thing pretty bad. It's hardly extortion.

For another take on the price issue, another take from the greasy bowels of Stupid Hell, comes this hideous Joystiq Editorial. When reading it, it may help you to know that "ceteris paribus" is Latin for look how fucking smart I am. Based on the scandalous announcement that Nintendo is selling the Wii at a profit, blogger Vladimir Cole pipes in with:

1. We should buy Sony and Microsoft products because they lose money on them

2.  Losing money now is the same as making money in the future

3.  Selling your console at a profit is a sign of fear and uncertainty

4.  Nintendo doesn't believe in their own product

Awesome!  It's a Goddamn retard rodeo over there.  It's fun to think about the author tippity-tappin' this one in while he eats light bulbs in the last car of the circus train.

If you want to know what it's actually like to use the Wii, I can show you in a way that is almost frighteningly robust: just listen to these people comment on Metroid Prime 3 while they play it. When the Wii is on, when a visionary developer is actively trying to channel tactile experiences, it can be extremely potent. Can it also be like learning your hobby all over again, discarding years (in some cases, decades) of experience? I don't want to disappoint you, but yeah, it does sometimes. Personally, I'm excited by the prospect - but I'm not the type of gamer who needs to assert their pwnership over the medium.

i've been as bad as you