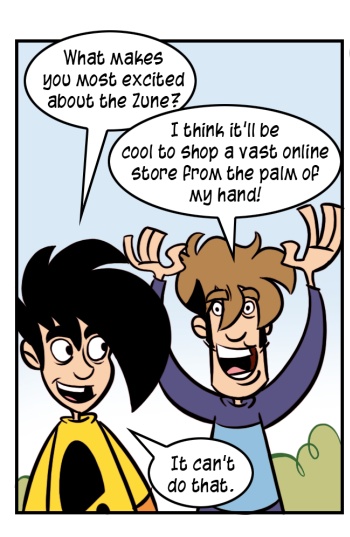 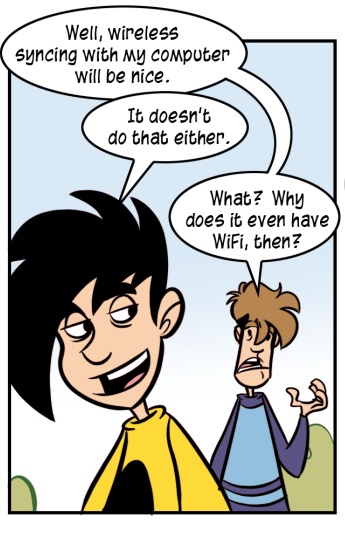 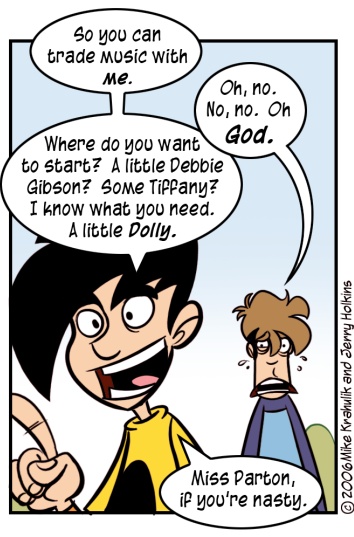 Poking around at the 'Avatar yesterday, hungry for news, we came across a link to Engadget's verdict on the Zune. At least, the Zune as it is currently conceived - before the animal hunger and ingenuity of the open-source community penetrates it. I got the impression that Engadget was as surprised as we were to find a lot of the gadget's potential - things that seemed natural to expect, seeing as they are currently made manifest by competing devices - was sort of missing in action.

Initially we regarded the device with suspicion, then anticipation, and then white-hot desire based on what a machine with those specifications could accomplish - the wireless fi, the wider screen, a sharp UI, and the indubitable Xbox 360 integration. I've got an unobtrusive Samsung player, yeah, but it's just a little solid state munchkin with 256 embarrassing megs - it's not exactly hitting giant crabs for massive damage. You can plug some headphones into it and it will play music. It's never going to play anything but music, or be a Live Anywhere client, or whatever.  The screen on that Samsung is just large enough to see myself scowling in it.

I mean, I do "get it." They're creating a new platform. And the 1.0 version of this platform isn't of interest to the discerning technophile, though we desperately wanted it to be.  And I have every faith that some upgrade with an innocuous filename will, in the future, reshape the very soul of the device. But I don't need to have the device in hand while they prepare this apotheosis. Nor do I let food scraps and animal carcasses pile up in the living room because they might one day become petroleum.

Gadgetry is still, thank God, a realm in which I can still mount a defense.

I loved this post from the Engadget thread though, and I think you might as well.  Remember, this is just from a regular Joe, like you!  Only he has roots and fronds, because he is a plant:

"Despite the fact that Zune won't have all the capabilities the market desires at launch, Microsoft is a dependable company and these features will be addressed at some point in the next year. This includes wireless, of course. It will function as the market dictates.

The Zune aims to be a revolutionary product, not an evolutionary one. The goal wasn't to simply copy the iPod, but rather to create an entirely new device. The look, function and place of this product are inherently unique. To that effect the Zune will find its niche within the marketplace.

I'm very pleased with what's been announced and I'll be purchasing Zunes for the whole family."

It's like, man, listen. I was with you up until the end, there. Zunes for everybody, huh? I guess they pays 'em real good.

i don't need to be discovered