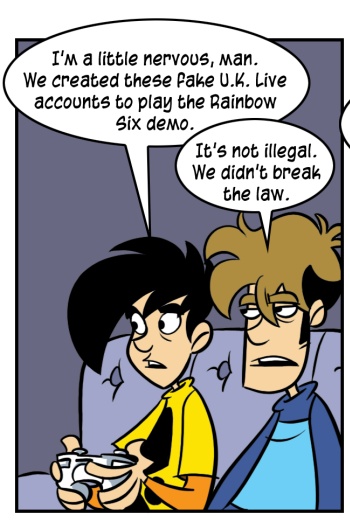 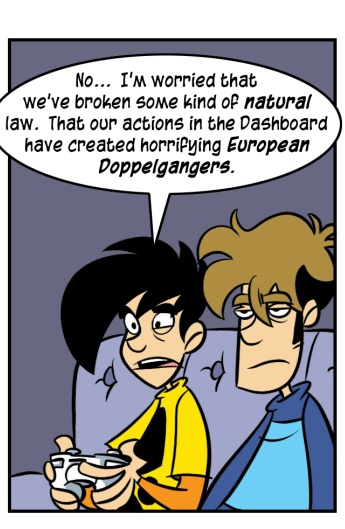 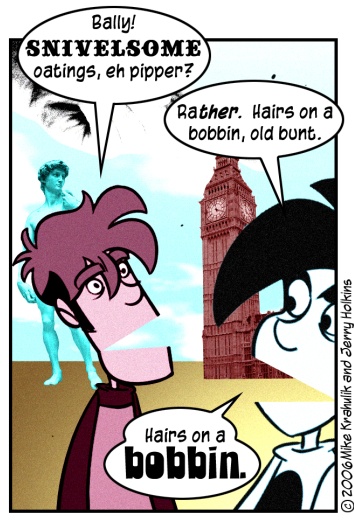 As I mentioned a few days ago, Gabe and I created two Europeans out of thin air - created men, as the Gods do. Well, maybe just their Live Accounts. But as we logged on, Gabriel was seized by a new kind of fear. That fear is the subject of today's comic offering.

Loathing for microtransactions has grown so intense - based on brutal acts, still fresh in the gamer metamind - that it is even projected out into the larger culture. There's a few things going on here. As much as I don't want to talk about Electronic Arts three days in a row, if they're going to keep exposing their flank, then I'm going to take the bonus to hit.

They have generated a tremendous amount of ill will with their recent microcontent indiscretions. This comes up in the interview I mentioned before, but why Major Nelson, Avatar of Xbox Live must respond to it is beyond me. He didn't upload that shit. A representative from EA would have made more sense.

It's happening on Microsoft's service, though, and these shenanigans reflect on that service. But what are they supposed to do? EA is the sort of company you should never dare refuse anything - even when their games don't work properly, via some mysterious process they soil the retail shelf. Certification for a platform is a highly politicized process. Electronic Arts is as big as it gets, and there is a threshold of corporate mass beyond which the laws of business become warped. So, no. I doubt Microsoft wants to expend goodwill clamping down on EA's wholly optional downloads. I'd like to see them stand in opposition to exchanging real money for Godfather Bucks, or buying the cheat codes that you enter manually on other systems - but, honestly?  I'll bet a gamer more in the mainstream relishes those options.  Scandalous, I know.  But EA didn't get to be EA by putting out shit nobody wanted.

Every major platform supports microtransactions, and the objective - in every case - is to pile wealth in underground vaults. They're all going to push it for a while. All of them. You don't like it? You push back.

The Lumines Live issue (also referred to on the show) doesn't have the same contours for me. I have faith that you are aware of it, but in case my mom is reading: at E3, it was announced that Lumines would be hitting Live Arcade (crowd applauds). Shortly thereafter, it was announced that multiplayer mode would be a separate purchase. The uproar was such that they scrapped this idea and built it back into the core game, also applauded, but only because we didn't really know what that meant.

It meant that in the version of the game they made available, almost every core feature is broken up into a separate, pay download. I don't see this as being a part of the other problem, even if forum heat tends to conflate them. Certainly, the mercenary nature of the pricing stokes user rage. The problem is that Lumines has no business being on Live Marketplace to begin with. Live games (for every other developer) are limited to fifty megs - just right for a memory card, a grim legacy borne of their refusal to make the hard drive standard. Procedural magic aside, the constraint is a concern - but in this case, they simply went through with a machete and hacked up every menu item into an "optional purchase." If Lumines Live were a retail proposition at forty dollars, all content included, there would be no torches and pitchforks. They could release extra content on Marketplace and make a killing. As it stands, it's a flagrant abuse of an otherwise trusted system.

This all comes to the fore as just as Microsoft is under pressure to increase the perceived value of Gold without adding new features. As recently as the day before yesterday, they've begun delaying access to content based on status.

I understand the purpose. It isn't designed to convince Silver Members to pay, so much as it is to convince Gold Members that they are paying for something. Up until now, Silver hasn't really been second class - as strange and hairy as these creatures must be, there are people for whom Silver makes sense. But they made a serious misstep with the content they chose to inaugurate Silver's descent into squalor: a trailer for Gears of War. An advertisement. Now, don't get me wrong. This is really quite a trailer. The term "trailer" may even be insufficient. But, um... When you make people pony up for instant access to ads? They might get the impression that you are taking advantage of them.

I'm just throwing it out.

i mean it this time