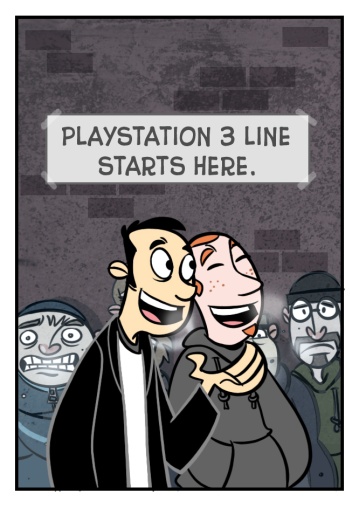 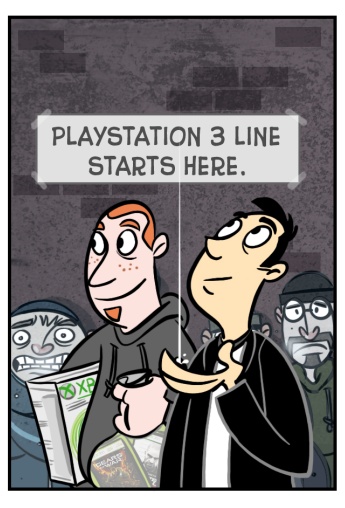 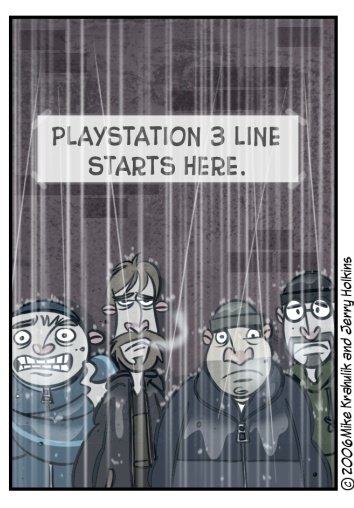 It was good news there for a little while, when PS1 games were five bucks a pop and you were changin' out that hard drive and still retaining your warranty - big, generous moves that asked hard questions of their primary competitor. Just days later, it's weird rumor after dark rumbling after grim report.

The cruelest speculation is that the launch figure is something like half of what was promised - 150,000 to 200,000 units, says one analyst. I am not an analyst, but when I scour the launch list for a reason to wait outside for days in a fucking line, no klaxons sound and no lights begin to blink or flash.  Motorstorm and Lair  - the games that really sold people the system at this year's Tokyo Game Show - are nowhere to be seen.  There are, of course, those distant ultrabrands -  the ones that start with Metal and Final  - but buying a system at today's prices, under today's conditions is on that basis is... unwise.  Unwise is the diplomatic word I have chosen.

The launch is full of...  Well, Launch Titles.  It sounds like Insomniac did what Insomniac does - deliver spit-polished hits. Past that, you've got Genji (rank), Untold Legends (just... no) and Gundam (daemonic). Everything else is something that

(a) already came out, and

(b) most likely runs better or has more features on existing equipment.  Seriously, read the reviews.

With the Playstation 2, we ascribed the spotty launch supply to monstrous intent. We were young men, though, and young men often feel the weight of unaccountable oppressors bearing down on them. Speaking today, it seems clear to me that Sony would not want to launch under these conditions if they had any choice in the matter. Not with this anemic supply, now reaped by speculators. Not with these titles. But they have done it, singing all the while, making a stupid pageant of the whole affair with their petty sniping. Well, you have not succeeded, not at anything laudable. You've kept young people in out in the elements for days through your ineptitude, this is true, but that is worth negapoints - a reverse scoring method exclusively for jackasses that starts at zero, and actually goes down from there.