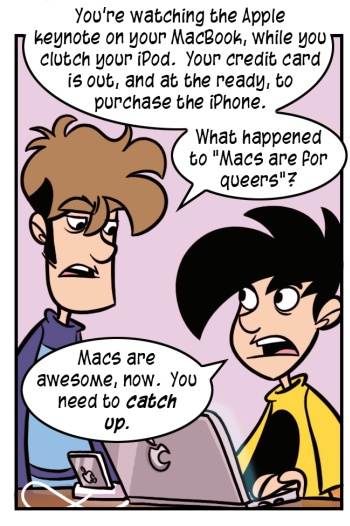 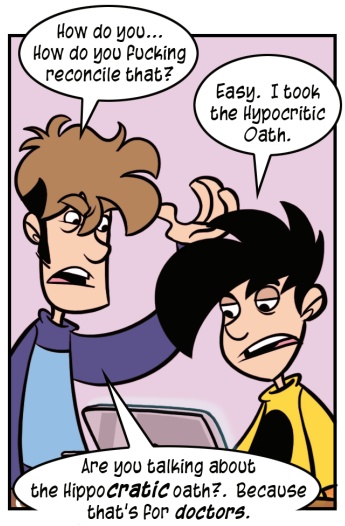 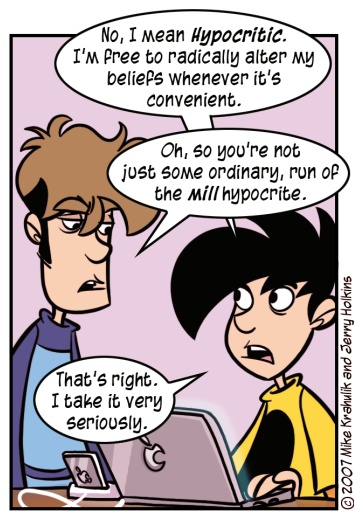 Despite the savageries I have borne for purchasing a Zune, I did buy it for a reason, and I held this reason tight in my palm like a mystic amulet.  The strip focuses on Gabriel's growing zealotry, its dark seeds bursting into clutching vines. The credit card was out, he was ready to buy, and I'll be God damned if I wasn't right there with him.

It's always the wrong time to buy an MP3 player, always, which is what kept me from seriously investing in one until 2006.  But I didn't just purchase the wrong one, at the wrong time: I purchased it virtually on the brink of its dissolution. I can hardly look at it now, it's like holding a dead squirrel. On its 4:3 screen - the exact ratio of obsolescence - I can see destroyed futures. I don't have to tell you that the iPhone is the future of that platform, as opposed to an aberration. iPods just have touch interfaces now, multipoint touch interfaces with clever gesture controls that you use to manipulate a rich video environment on a screen that is best in show.

I wonder what the mood is at the Microsoft booth over at CES - I would imagine that it is apocalyptic. I'll be down there soon, so I'll know for myself. I've imagined the following scenario:

Young men and women are seated on low red couches, their eyes glistening, the blood gone from their face. Their badges identify them as Microsoft employees. Many of the kiosks are empty, but there is a devastated young man standing like a statue near an Xbox 360. The monitor connected to it is turned off. From the intensity of his stare, he is either deep in thought or has discerned some secret message woven into the carpet.

There is no response.

He doesn't speak so much as the word just falls out of his mouth.

I'll show you my dark secret