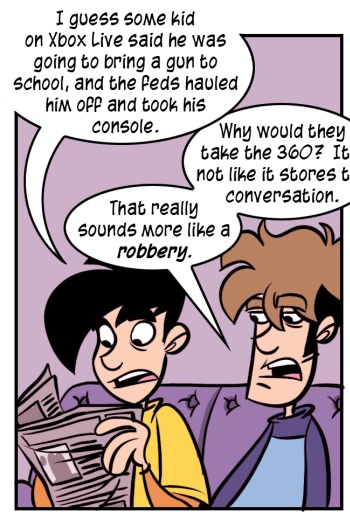 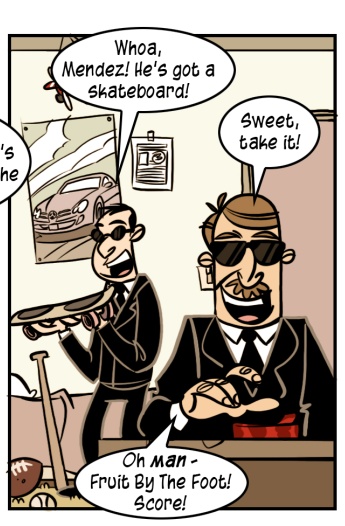 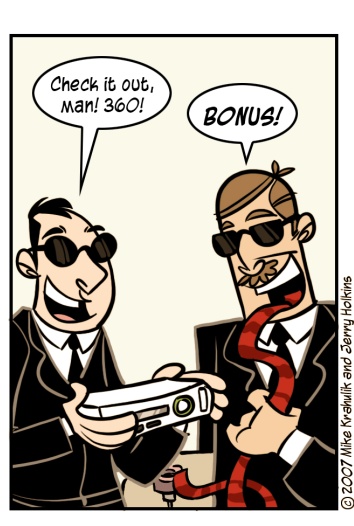 I uploaded the comic early, as many of you noticed. I entered the wrong number in the update field. You may also have noticed that the spelling in these posts has really gone to hell. So, that's numbers and letters. I hope to one day discover a set of pictograms with which I can manage some baseline fucking proficiency.

The story doesn't entirely make sense to me, but that's alright: nobody got hurt, and all that happened is that the feds made off with some snacks and a young person's Xbox 360. I'm sure they'll love Alien Hominid HD when it comes out - as I recall, the game's primary goal is to ride their agents around like animals whenever you aren't devouring their heads.

I'm really glad that school was a dark and distant memory by the time presumption of a young introvert's criminality became the norm. Please understand that if a person casually mentions that they're going to pack heat after a round of R6, I think you should take a peek in the ol' Jansport. But I'm almost sure I would have been jailed for my normal behavior, or at least "treated" for it, and I have a sense that this process would have thinned my already brittle grip on the rational.

I would be embarrassed to relate the whole of it, as it involved a bad perm, but after being fucked with relentlessly by two assholes over a substantial period of time, I made it clear that the endpoint of this activity was - for them, at any rate - subterranean.

Let's come right to it: the only way I would actually kill a person is if they were playing the same game I was and happened to join the server. Even then, they would not die, even if I held the wish bright like a candle. In general terms, I'd try to deal enough "damage" to their network entity while dodging their own considerable firepower. I would try to use the map to my advantage.

But no, not murder especially. The urge to make a sound - some sound, of any kind - against the din of that place, whose overt and subliminal messages both are to disappear in the current, is almost overwhelming. Some of these sounds are nonsense. Some of them are out and out lies. I doubt those guys even remember it now. I only remember it because I'm ashamed of it. I don't want to disappoint you next generation, but the damage one accrues in that cursed labyrinth does remain on your character sheet.

Sorry.  I was going to talk about Crackdown, and I got sidetracked by something else.