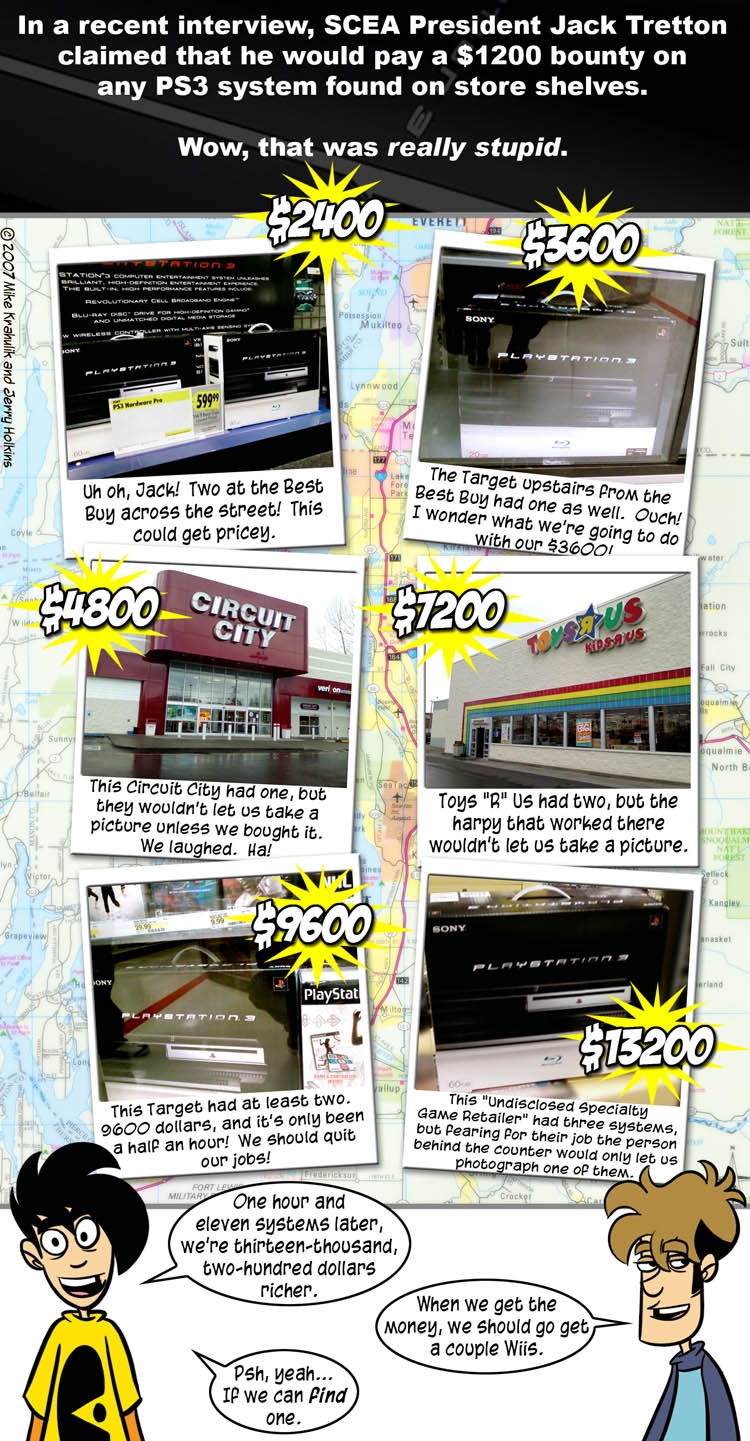 We put Monday's strip up early, so you might have seen it already - but you might not be familiar with the EGM interview it is based on, an excerpt of which appears here. I sometimes worry about appearing partisan in these communiques, but it is not my job to be fair. I'm not a journalist, I'm a consumer. I don't buy one product from each company in the interests of some karmic ideal, and I don't need to purge my posts of wrongthink because I haven't produced something suitable for use as a press release. Sony is grinding down their goodwill with every smug, psychotic interview, and someone needs to tell them so in clear terms.

This is an intervention.

You may wonder about the methodology we employed in our ultrascientific enquiry, and there's really nothing to say. We went to the stores that were closest to us. We did not call ahead and thus craft some optimal route that would generate maximum shame - to say nothing of maximum profits! There are many regions of the city that we were unable to scour, but the answer to the question "can a PS3 be purchased without difficulty" is definitive. Jack Tretton had to know this, and yet he persisted in his fairy tale. I'm surprised he didn't ask EGM to verify the stock numbers with a giant caterpillar. Certainly he would know.

It is not difficult to lie to people. It may be better (i.e., more polite) if we call it "information management." It is not difficult to manage information. But the information you are "managing" needs to conform, at least superficially, to reality. It is as though they don't realize that every gamer is attached constantly to one another in an absolutely unbroken stream of communication. In this case, it's as though he wasn't even aware of the telephone.

If there is stock, you don't say that there isn't stock. You don't say this ever. You can say there isn't as much stock "as people are saying," which isn't strong but creates doubt. You could say that the stock is primarily the 20GB model, because the response to the "consumer proposition" on the "premium model" was "stronger than they expected." I feel kind of dirty now. But the right response, the one that makes a "ding ding ding" sound, is that the stock exists not because it hasn't sold, but because they are being bought and swiftly replaced by new stock. Also, if there's more time in the interview? Say that you're "leveraging synergies." Synergies are basically awesome, and they're even better when you leverage them.

I would not go so far as to say that (what is known as) the hardcore sustain the entire industry, but what Sony is learning is that they do catalyze it - they make livable the period between when a platform is released and when it becomes a mainstream proposition. These are the people that they are taking for granted. Let's see how far it gets them.

they'll have to agree