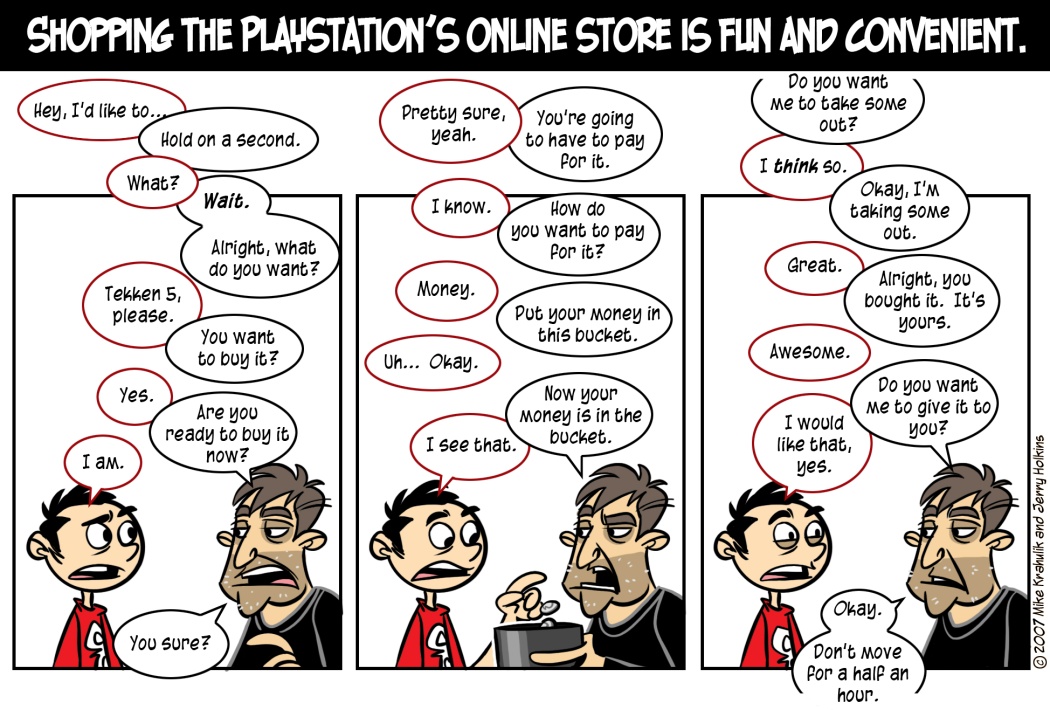 I've tried to make the most of the Playstation 3 now that it's set up, and hearing that Tekken 5 would see release on the service yesterday made us dig deeper into their virtual storefront.  This has got to be one of the most careful, convoluted purchase experiences ever engineered. The comic presents it as a conversation, which I suppose each transaction is, at some level - but this is actually how it goes down.

I'm pleased that Sony has rejected "points" or some other stored value nomenclature for store purchases, but that is useful only as a rhetorical bludgeon and doesn't actually improve the store experience. You can't just enter your credit card data and then make purchases, which is what I imagined a store based on supposed "real money" would mean. Each time you buy, you're "filling" a virtual "wallet" (or bucket, if you prefer) even if it's just for the price of a single item. It's a ridiculous, tortuous process that doesn't even culminate in the download of your Goddamn purchase.

Though the post yields to no such stricture, we usually try to refrain from comment on Sony's doings in the strip proper.  This is because their clumsy executives and platform woes are so routine by now that there is almost no work left for honest satirists. Last I heard they had actually murdered the editor of Kotaku, or did something else mean, maybe they didn't kill him but I don't think he can come to Phil Harrison's birthday party. Grim tidings, to be certain: there was talk of clowns.

Sony and Kotaku have since made up, but if you're wondering what the problem was, cross your eyes and gaze into my retarded crystal ball: in the first unremittingly positive Sony news in months, Kotaku posted a rumor about a new initiative from Sony to seize the addictiveness of Achievements and self-identification of a Mii in a comprehensive, deeply integrated PS3 service called Playstation Home. This "rumor" probably wasn't, and when asked for comment Sony told them not to post it.

That sort of thing rarely works, and the story was published leading to Sony pulling their support for the site and demanding the return of their review hardware.  This was especially counterproductive (to the extent that it may have earned some kind of multiplier) because Kotaku editor Brian Crecente might be the most even-handed commentator currently writing about the new Playstation online.  I understand that they are again "tight," that they are each others' "dogs" and have consented to bark with one another, but it offers a glimpse of just how difficult it is to track this company's strange trajectory.  Like some idiot alchemist they are able to transform good news into bad news, or turn gleaming triumph into wretched defeat.

i cannot find no cause for celebration 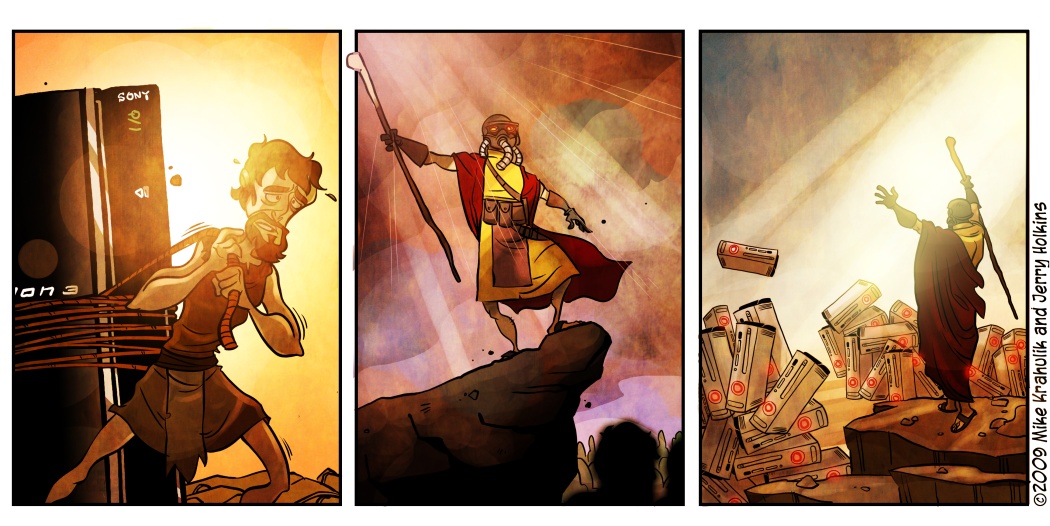