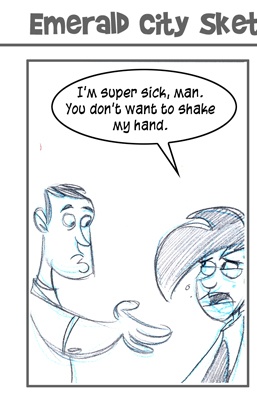 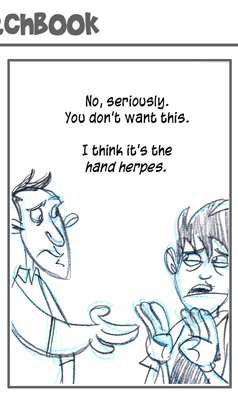 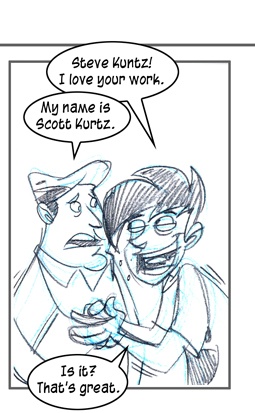 The Emerald City Comic Con was - I feel secure in this point - a convention.

Being a convention, Gabriel had to spend some portion of it (in this case, all of it) under the heel of some life-threatening illness. I don't know what exotic animals he is collecting these things from, what dark zoo simmers these diseases, but he's always got an assortment of creative symptoms that I think show some real ingenuity. He does try to withhold it by and large, but he is also generous in his way and does make the occasional exception.

You can actually talk to people at Emerald City, and the line is never especially long, which gave Gabriel a chance to dash the dreams of many Puzzle Quest hopefuls. Pink Godzilla brought twenty copies to sell, all of which were gone in six hours. Robert picked up a copy and quickly became so fearsome an opponent that is is no longer worth playing him. Worth playing it at all, maybe. Thus is the cycle repeated: discovery, challenge, mastery, and then, finally, Robert.

(Perhaps this will signal a return to Meteos, my prior convention game? It's still one of my favorite DS carts, and - even taking into account the degenerate tactics of the scribbler - provides one of the most entertaining, exciting multiplayer puzzle experiences in existence. Only Super Puzzle Fighter matches it for kinetic thrills, but the physicality of that combat is abstract by comparison. In the original Meteos, you are actually, really, for real launching boulders at an enemy world in in an effort to eradicate an entire race in its troubling hybrid of Tetris and genocide.  If you can get past the idea that [even in the abstract] you are helping a mermaid clean her room, the ergonomic improvements of the Disney sequel are substantial.)

We met a woman with a truly outstanding "portfolio," which, surprisingly enough, is not a euphemism. She mentioned a YouTube video to us (as one is wont to do) regarding a PG rated cut of 300 that must be watched - and repeatedly.

We may well see you at next weekend's Sakuracon, where our star will be dwarfed (ha!) by the likes of Sam Logan, Jeph Jacques, Shawn Handyside, and the cocks at Rooster Teeth guys. I've heard tell of a barbarous webcomics Battle Royale, presided over Chairman Kage-style by his excellency Fred Gallagher. That's great; when filling out last year's comment card, I specifically asked for more barbarous Battle Royales.

for each discrete inequity